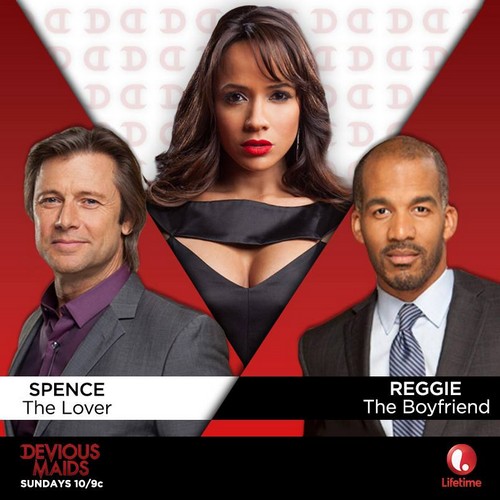 Tonight on Lifetime DEVIOUS MAIDS continues with a new episode called, “Night, Mother.” On tonight’s episode Nicholas asks Marisol a surprising question; Opal turns to Ethan for help; Genevieve invites Zoila and Javier over for dinner; Valentina gets caught in the crossfire when Evelyn and Adrian try to outsmart each other; Carmen and Spence deal with Ty’s misbehavior; Lucinda and Rosie argue about her behavior.

On the last episode, Marisol convinced Nicholas to get rid of Opal for good as more secrets about the Deerings past continued to come out. Reggie became jealous when he learned of Rosie’s history with Spence. Carmen dealt with Ty’s crush and tried to let him down easy. Zoila got closer to Javier, at the expense of his own maid. Adrian became suspicious of Evelyn and Tony’s relationship. Remi tried to reconcile with Valentina.  Did you watch last week’s episode?  If you missed it we have a full and detailed recap, right here for you.

On tonight’s episode Nicholas asks Marisol a surprising question. Opal turns to Ethan for help. Genevieve invites Zoila and Javier over for dinner. Valentina gets caught in the crossfire of Evelyn and Adrian trying to outsmart each other. Carmen and Spence deal with Ty misbehaving. Lucinda and Rosie argue about her behavior.

Tonight’s episode is going to be another fun one, which you won’t want to miss. So be sure to tune in for our live coverage of Lifetime’s Devious Maids Season 2 Episode 8 — tonight at 10PM EST!

Tonight’s episode of Devious Maids kicks off with Marisol receiving a phone call alerting her that Nick had been in an accident. Ethan simultaneously realizes his car is missing and puts two and two together, his Mom gives him the “shh” signal as she rushes out the door to drive Marisol to the hospital.

Adrian and Evelyn sit down for breakfast, and Adrian continues to make her feel uncomfortable and hint at her and Tony having an affair. Tony passes through their breakfast and Adrian comments that Tony needs to find himself a young girlfriend. After Adrian leaves, Evelyn reassures Tony that Adrian doesn’t know anything, he just suspects.
Spencer gives Carmen a note to deliver to Rosie since she isn’t answering his phone calls. His nephew catches them talking and is convinced that Spencer is trying to sleep with Carmen.

Genevieve returns home and finds Zoila passed out in the recliner with the vacuum cleaner on. She confesses that she was up late with Javier the night before. Genevieve comes to the conclusion that Zoila and Javier are serious and demand that she invite him over so that she can meet him.

Lucinda storms into the house, furious, and announces that Dee Dee is a dead woman. She just found out that her Dad removed her as his power of attorney and is convinced Dee Dee is responsible for what happened.

Marisol is allowed to see Nick; the doctors reveal to her that Nick has to have a very dangerous surgery and remove bone fragments that are pressing on his aorta. Nick asks Marisol to marry him in the hospital in case he doesn’t survive the surgery.

Zoila, Carmen, and Rosie arrive at the hospital to be there for Marisol. She confesses to them that she accepted Nick’s proposal, she didn’t know how to say no to him lying there in a hospital bed. Zoila tries to convince her to reconsider, she thinks Nick is evil. Rosie and Carmen agree to help her get ready for the wedding.

Valentina catches Adrian unpacking boxes of surveillance cameras. He announces he is planting them around the house so that he can “catch her in the unholy act and he can crush her and win.” Valentina tries to reason that it isn’t a game, but Adrian doesn’t want to hear it.

Opal rushes home to get insurance information for Marisol, Ethan confronts her and asks her why she ran him over. She confesses that Nick was threatening to kick them out and take Ethan out of his will. Ethan is shocked. Opal begs him not to be mad at her and insists she did it because she is a great mother.

Ty slips something in Spence’s drink and sits down to dinner with him and Carmen. While they are eating Spence begins sweating and his stomach starts rumbling. He rushes off to the bathroom and Ty uses the opportunity to point out how old and undistinguished his Uncle is.

Javier, Zoila, and Genevieve sit down for dinner. Zoila is annoyed when Genevieve shamelessly flirts with Javier all night.

Rosie heads in to Miguel’s school, and learns that Miguel had an incident. Miguel called one of the girls in his class a “gold-digging whore” when she tried to eat his cookie. (Something he obviously picked up from DeeDee and Lucinda.)

Evelyn receives a bouquet of flowers with a hidden camera on it and orders Valentina to put them in her bedroom. When Valentina refuses Evelyn discovers the camera on it and asks her how many cameras are hidden in the house. She announces since she is being watched, “she is going to have to put on a show.”

Ty pays Carmen a visit and learns that she took Spence to the hospital the night before. The doctors think that he digested some household cleaners. Carmen puts two and two together and realizes that Ty poisoned his Uncle, she asks him why he did it and Ty says that his Uncle “doesn’t love her like he does.”

Zoila confronts Genevieve and asks her why she has been flirting with her boyfriend Javier. Genevieve fumes that Zoila is just jealous of her “ageless beauty.” When Zoila storms off Genevieve receives a phone call from her doctor telling her that her test results are in and she needs to come in to his office.

Opal receives a phone call from the police and asks Ethan to be her alibi when she meets with them for questioning. Ethan agrees to tell the police that she was with him all his life, as long as she promises to move out and leave his life, he is tired of lying for her and covering for her, he is tired of carrying around her secrets.

Spence returns from the hospital and tells Ty that they need to talk. He reveals that Ty’s mother is on her way to pick him up and take him home, Ty protests and says he is just kicking him out so that he can have Carmen all to himself. Spence informs Ty that he is “going to get the help that he needs” and reveals that Carmen will not step foot in his house until Ty is gone.

Adrian asks Valentina to take him for a ride and leaves Evelyn home alone with Tony. He pulls out his computer to watch them on camera, and realizes that Evelyn knows there is cameras because she isn’t doing anything with Tony, instead she orders him to take her shopping. They find Tony and Evelyn pulled over and having sex in the back seat, but Adrian is too shocked and hurt to say something to them.

Zoila makes amends with Genevieve, and asks her to come out to dinner with her and Javier again. Genevieve agrees.
Rosie arrives home and finds Lucinda storming out with her suitcase. Lucinda reveals that Kenneth kicked her out of the house because she was “abusive to the help.” Rosie is confused because she never complained to Kenneth, it was actually Dee Dee. Rosie barges upstairs to confront Kenneth, but his nephew stops her and explains it was Dee Dee’s doing.

Carmen is planning Spence a 2oth anniversary party, since he has been on his soap opera for twenty years. Unbeknownst to her Ty is creeping in the bushes still watching her through the window.

Opal shows up to the hospital with a bouquet for Marisol, who is in her wedding gown. She announces to Marisol that she is moving out tonight, but she wants Ethan to stay at the house, Marisol says that will be fine. The pastor tells Marisol it is time for the wedding and she heads in to Nick’s hospital room to say her “I Do’s.”

Opal has a flashback to the night that she pushed Dalia off the bridge. Nick is ready to call the police, but Opal stops him. She says that if he rats her out for killing Dalia, she will rat him out…Dalia told Opal that Nick is a murderer before she died.