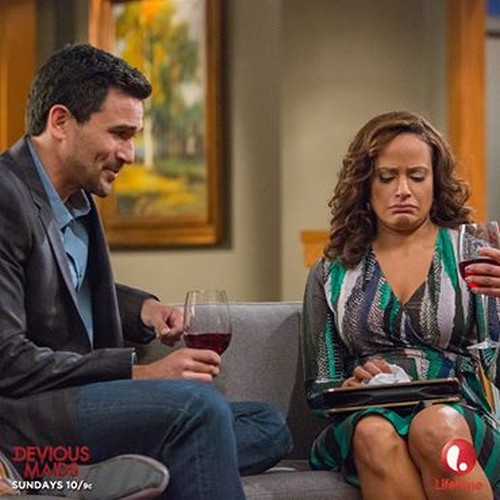 Tonight on Lifetime DEVIOUS MAIDS continues with a new episode called, “Betrayal.” On tonight’s episode Marisol discovers more secrets about Opal; Rosie tries to help Lucinda but it leads to further strife in the Miller family; Carmen prepares for a performance; Zoila goes on a date; Genevieve interferes with Valentina and Ethan’s relationship.

On the last episode, Marisol discovered more secrets about Opal. Rosie attempted to help Lucinda, which only lead to further strife within the Miller family. Carmen prepared for a performance. Zoila tried to move on from her husband and went on a date. Genevieve interfered with Valentina and Ethan’s relationship.  Did you watch last week’s episode?  If you missed it we have a full and detailed recap, right here for you.

On tonight’s episode Marisol convinces Nicholas to get rid of Opal for good as more secrets about the Deerings past continue to come out. Reggie becomes jealous when he learns of Rosie’s history with Spence. Carmen deals with Ty’s crush and tries to let him down easy. Zoila gets closer to Javier, at the expense of his own maid. Adrian becomes suspicious of Evelyn and Tony’s relationship. Remi tries to reconcile with Valentina.

Tonight’s episode is going to be another fun one, which you won’t want to miss. So be sure to tune in for our live coverage of Lifetime’s Devious Maids Season 2 Episode 7 — tonight at 10PM EST!

Tonight’s episode of Devious Maids begins with Carmen receiving a gift from Ty. She opens it and finds a leather jacket. She says she can’t keep it, because it is so expensive. Ty insists that she “made a huge difference in his life” She tries it on an falls in love and says she is never “taking it off.”

Zoila and Javier head back to his house after a date. She tells him that his home is “warm and inviting, but covered in dirt,” he needs a maid. He says he has one, but she has worked for him for ten years and he can’t fire her. Zoila convinces him to talk to her.

Valentina pays Adrian a visit at the mental hospital, she brings him his books and sneaks him some cookies. He wants to know why Evelyn didn’t come, but Valentina reassures him that she is busy. Valentina tries to convince Adrian to come home, and says that “Evelyn misses him more than she knows.”

Rosie is sitting at a restaurant waiting for Reggie, and she runs into Spence. She lies and says that Reggie is her immigration lawyer when he arrives, and Reggie is clearly not happy. When they get home he confronts her and asks where he stands. She confesses that she used to be with Spence, and now he is going through a divorce and she doesn’t want to rub in his face that she has a boyfriend.

The next day Spence finds Carmen’s new jacket and she confesses that his nephew Ty gave her the jacket. He is furious and says that she has to return it, she can’t accept a $3,000 gift from a 17 year old.

Remi confronts Zoila about Ethan, and says that he got a “weird vibe” from him. Zoila reminds him that she promised Valentina she wouldn’t meddle in his life. She tells Remi she needs to remind Valentina what is “right about himself” not what is wrong with Ethan.

Marisol sits down with Nick and tells him that she knows Dalia had an affair with Opal, and wants to know why he didn’t tell her. He says that it was embarrassing, and he and Opal were both devastated when she died, and they helped each other get through it. Marisol says it has been fifteen years, and it is time to send Opal on her way. She tells him that he can no longer live under the same roof as Opal. He reassures her that everything is going to be fine and he is going to take care of it.

Rosie introduces her friend Conception to Zoila and Carmen. Conception is Javier’s maid, and she is in tears because Javier says she has to clean the entire house after his girlfriend seen how dirty it is. She cries that she is supposed to go to San Diego to see her dying grandmother. Zoila feels guilty and tells her to give her the keys to Javier’s house.

Spence shows up at Rosie’s and informs her that Peri forced him to break up with her. And, he has “never stopped loving her.” Reggie barges in, and catches them talking. Spence leaves and Reggie says that he is uncomfortable with her seeing Spence. Rosie informs him it is not up to him who she sees.

Carmen returns the jacket to Ty, and says Spence told her to give it back. He begs her to keep it in her closet and hide it from Spence. She returns the jacket and tells him it was the thought that counts. Then Ty shocks Carmen and kisses her.

Nick surprises Marisol with a brand new house, then he informs her that Opal and Ethan are going to live in their old house. Marisol is furious, and can tell that Opal has something on him, she says either Opal goes or she goes.

Remi pays Valentina a visit and surprises her with a gift, a framed photo of a sunrise that they shared together. Remi confesses that he could tell that day was the “only moment she was ever truly happy.” She informs him that none if this matters because she is with Ethan now. He asks her to keep the photo as a reminder of what they had.

Zoila sneaks in to Javier’s house and begins doing all of the cleaning for his maid, who she promised to cover for. His maid has no idea that Zoila is his girlfriend though. She gets all of the cleaning done, and then rushes home and gets dressed and meets him back at his house for their date. Javier is furious he says that he has been paying her good money for ten years and she has been holding back on him. Zoila confesses to him that she met Conception and felt bad for her, so she cleaned his house for her.

Reggie bumps into Spence and announces to him that he is dating Rosie. Reggie says that they can bond over how “freaky Rosie is in the sack.” Spence freaks out and attacks Spence and pushes him onto the ground. He tells Reggie to stay away from Rosie and storms out of the restaurant. After he leaves, Reggie reveals that he set the entire thing up and had someone record Spence attacking him.

Carmen pays Ty a visit and tries to let him down easy. She tells him that she has a serious boyfriend, and he is a famous celebrity so she can’t reveal his identity. Ty is devastated, and says whoever her boyfriend is he is lucky to have her.

Evelyn and Tony arrive at home and Evelyn can’t find Valentina. Evelyn thinks that Valentina is acting strange towards her lately, and she is afraid that she knows about their affair. They head into the other room and are shocked to see Valentina standing with Adrian. He announces he is healed and home to stay. Evelyn and Tony are obviously not thrilled.

Reggie heads home and shows Rosie the video of Spencer attacking him. He lies and says that Spence said horrible things about her and when Reggie defended her, Spence attacked him. Rosie is shocked.

Carmen reports back to Spence and says that she dumped Ty like he told her to. He confesses that he got in a fight with Reggie, and Rosie is furious and told him that she will never see him again. Carmen comforts him and hugs him, while Ty watches from around the corner.