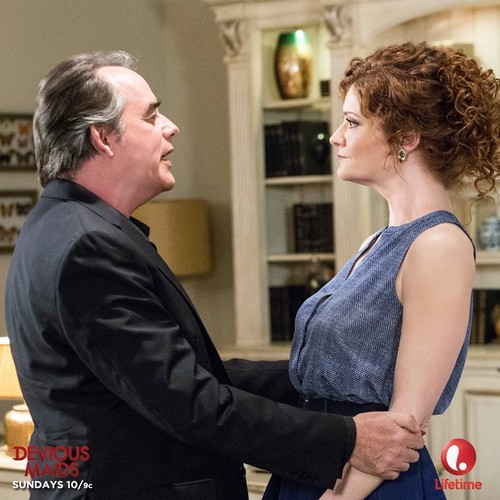 Tonight on Lifetime DEVIOUS MAIDS continues with a new episode called, “Crimes of the Heart.”  On tonight’s episode Marisol suspects Nicholas may be hiding a secret; Genevieve encourages Zoila to take a date to a family event in order to make Pablo jealous; Evelyn tries to spend more time with Tony by driving Adrian out of the house; Carmen’s new job leads to conflict between her and Rosie; Valentina and Ethan get closer; Genevieve gets some unexpected news about Remi.

On the last episode Marisol discovered some shocking news about her fiancé Nicholas and Opal. Dissatisfied with the doctor that Didi’s provided for Kenneth, Rosie took Kenneth to a specialist who provided them newfound hope. Carmen prepared for her performance debut in front of industry bigwigs, but when reality hit she struggled to perform. Genevieve tried to show her support by inviting Zoila to a luncheon. Increasingly wary of Adrian’s behavior, Evelyn found comfort elsewhere. Valentina struggled to get over Remi.  Did you watch last week’s episode?  If you missed it we have a full and detailed recap, right here for you.

On tonight’s episode Marisol suspects Nicholas may be keeping another secret. Genevieve encourages Zoila to take a date to a family event in hopes to make Pablo jealous. Wanting to spend more time with Tony, Evelyn concocts a plan to drive Adrian out of the house. Carmen’s new job causes conflict between her and Rosie. Valentina and Ethan get closer, just as Genevieve gets some unexpected news about Remi.

Tonight’s episode is going to be another fun one, which you won’t want to miss. So be sure to tune in for our live coverage of Lifetime’s Devious Maids Season 2 Episode 4 — tonight at 10PM EST! While you wait for our recap, check out the preview below.

Tonight’s episode of Devious Maids begins with Genevieve getting Zoila dolled up. Pablo has called and wants to see her. Pablo reveals to Zoila that he is dating a woman named Helen from work and he is bringing Helen as his date to their God Son’s graduation party. Zoila is furious and threatens to remove one of his body parts.

Evelyn sends Adrian off to therapy and then rushes to her bodyguard Tony’s room for a quickie. Adrian knocks on Tony’s door and Evelyn hides under the bed.

Genevieve informs Zoila she has to go to her God Son’s graduation party. She encourages her to to go find a “handsome successful man” and show up with him on her arm to prove that she doesn’t need Pablo anymore.

Carmen is busy interviewing for a maid position, because now that Alejandro is dead-she is broke and homeless.

Marisol is convinced that nick is Opal’s son Ethan’s father. Her friend encourages her to look at his financial records and see if he has any accounts set up for Ethan. If he is his father then he must have some sort of secret trust for him.

A florist arrives at Genevieve’s to deliver flowers from her latest admirer, he asks Zoila out and Genevieve persuades her to take him to her God Son’s graduation to make Pablo feel bad that she is dating a successful flower shop owner.

Kenneth’s therapy has been doing wonders and he is now able to type on a computer to interact with people around him. His nephew Reggie is so pleased with his progress since Rosie began caring for him that he asks her out to dinner. Rosie declines.

Marisol is trying to convince Nick that they should get a pre-nup, he doesn’t think they need one because he completely trusts her. She argues and forces him to call a lawyer, if she signs a pre-nup then she will get to see his financial records and know whether or not he has a trust set up for Ethan.

Ethan surprises Valentina with a sketch pad because she confessed she wants to be a fashion designer. He tells her to go draw and vacuums the rugs for her.

Rosie learns that Carmen is working for Spence and marches over to his mansion and informs her she has to quit. She is scared that Carmen will “tempt” Spence and she is in love with him. Carmen informs her that she has no intention of sleeping with her boss like Rosie did, and she has no intention of quitting because Rosie says so. Zoila and Marisol head over and lecture Carmen, they tell her if she is a good friend she will quit her job at Spence’s and they will loan her a little money to survive off from until she finds another job.

Tony and Evelyn are working together to make Adrian think that he is crazy by breaking things around the house and making unexplainable noises. They are trying to get him out of the house so that they can have some alone time. Tony even goes as far as to dress in black and run around the house like a ninja. Adrian is paranoid there is an intruder and begins chasing him around the house. Evelyn reassures him there is no one in the house and he is imagining it all.

Zoila takes Genevieve’s florist to her God Son’s graduation party, Pablo is shocked to see that she isn’t as “devastated” as she though he would be. Zoila finds a check for $1,000in her date’s pocket from Genevieve. The florist confesses that the whole thing is staged and he isn’t a florist, he’s from an escort service, and Genevieve paid him to ask Zoila out. She heads home and doesn’t tell Genevieve she knows the truth about Dave the florist, instead she tells Genevieve that she wants to marry Dave and have a baby with him. Genevieve freaks out and confesses Dave is a male prostitute. She did it because she is scared Zoila is going to wind up old and alone like her. Zoila forgives her…but tells her the next time she pulls a stunt like this it will be the day that she dies.

Rosie is taking care of Kenneth and filling him in on all the sordid details of her affair with Spence. Kenneth realizes this is why Rosie won’t date his nephew. He manages to type her an inspirational message about moving on to something new, and Rosie is touched and informs him he is a “wise man.”

Evelyn and Tony’s plan has worked, Adrian is headed to a resort for a few weeks of intense therapy. He thinks he is truly crazy.

Nick comes home and Marisol confronts him, she found out from her lawyer that Nick left Ethan $5 Million. She calls him out and asks him if he is his son. Nick blatantly denies the accusation and announces he is sleeping in the guestroom tonight. He put two and two together and realized Marisol made up the entire pre-nup so that she could have access to his financial records.

Carmen reveals to Rosie that she is going to quit her job at Spence’s house for her. Rosie tells her that she doesn’t need to quit because she has decided to move on. Then, Reggie arrives for his date which Rosie.

Valentina shares her design sketches with Ethan, and presents him with a shirt that she designed and sewed herself. He thanks her and kisses her.

Genevieve receives a phone call from the Congo, she learns that Remy has come down with a virus and isn’t responding to treatment-they are sending him home on a plane.

Opal confronts Marisol in the morning and wants to know why they were arguing about her last night. Marisol confesses that she thought Nick was Ethan’s father. Opal says that she met Ethan’s Dad in a bar, and went home with him. According to Opal Ethan’s Dad was a monster and nearly raped her and that is why she hasn’t told Ethan who he was. After her conversation with Marisol, Nick thanks Opal for lying to her.