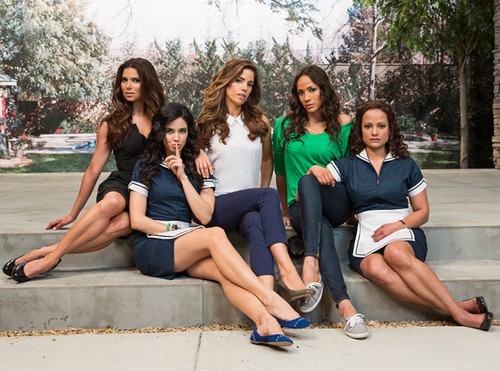 Tonight on Lifetime DEVIOUS MAIDS continues with a new episode called, “An Ideal Husband” On tonight’s episode Season 2 begins with Marisol engaging in a new romance, and Zoila learning that Valentina is back from Africa. Meanwhile, Peri goes to great lengths to keep Spence and Rosie apart; Carmen and Alejandro settle into their fake relationship; and Adrian and Evelyn hire a handsome bodyguard.

On last season’s finale Beverly Hills’ darkest secrets were laid bare in the season finale of “Devious Maids,” when a lavish black tie event was once again marred by lust, jealousy and revenge. As the mystery surrounding Flora’s death reached its boiling point, the maids orchestrated a plan to ensnare the murderer. But no one was what they seemed. And no one was safe.  If you missed last season finale we have a full and detailed recap, right here for your enjoyment.

On tonight’s episode three months have passed, and Marisol has found a new love. When Peri discovers that Rosie is back in the U.S., she goes to great lengths to keep Spence and Rosie apart. Zoila learns through Genevieve that Valentina is back from Africa. As Carmen and Alejandro settle into their fake relationship, Odessa reaches her limit. After a traumatic event at the Powell home, Adrian and Evelyn hire a handsome bodyguard, Tony.

Tonight’s episode is going to be another fun one, which you won’t want to miss. So be sure to tune in for our live coverage of Lifetime’s Devious Maids Season 2 Premiere — tonight at 10PM EST! While you wait for our recap.

Tonight’s episode of Devious Maids begins with a flashback to 1999. Ethan is watching his Dad Nick fight with his Mom Dalia outside. She smacks him and storms off. Ethan and Nick and his maid Opal hop in the car and chase Dalia down the road in the middle of the night. Ethan watches as his Dad and Opal get in a struggle and then his Mom flies over the bridge. The cops and EMT arrive and Nick tells them that Dalia jumped, Ethan backs up his story.

Rosie is in court to see if she will be deported. Marisol, Zoila, and Carmen head to church to support her. Her case is postponed for six months and she can stay in the US. Marisol announces that Nick proposed to her last night and shows off her ring and brags that he is so rich they had pheasant for dinner.

Adrian and Evelyn arrive home and find their new maid Fatima waiting for them on the front steps. Adrian is not pleased, he thinks Fatima looks “hideous.” Evelyn reminds him that she is just there to clean.

Zoila tells Genevieve that she needs to drop the “grieving widow routine and go shopping.” Genevieve receives a letter from Demi, and rushes off and won’t tell her what is in the letter.

Carmen and Alejandro return from a red carpet event and Carmen brags about how beautiful all the celebrities were up close. She wants him to buy her some new clothes but he reminds her she is just his fake girlfriend.

Adrian and Evelyn are hosting a dinner party and a group of men in masks barge in with funs. They demand that all of the guests hand over their jewelry and then hit Adrian over the head and knock him on the floor.

Peri is relaxing on the couch drinking a glass of wine and Rosie barges in to reveal that she hasn’t been deported. Peri is shocked, she tells Rosie that she has a new maid and doesn’t need her anymore.

Genevieve finds Valentina staying in a run down apartment, Remi wrote that she had come back from Africa without him. He decided to stay in the Congo another year. Valentina didn’t tell her Mom Zoila that she is home because she is still mad at her Mom for encouraging Demi to go to Africa.

Evelyn is meeting with police officers and describing her stolen jewelry. They encourage her to hide a body-guard since Adrian is a hot mess.

Carmen and Alejandro arrive at another red carpet event, but Carmen refuses to get out of the car. He climbs back in and she complains about his maid not respecting her. He says that he will support her more and she finally gets out of the car and smiled for the paparazzi.

Marisol is having some serious issues with Nicholas’s housekeeper Opal. His housekeeper informs her that after Dalia’s suicide Nicholas was devastated, and he will never be able to love again.

Adrian has hired a new bodyguard named Tony, an ex member of the secret service. And Evelyn is pleased to have a new Latin hunk moving into their mansion.

Carmen wakes up the next morning and tries to get Odessa to make her breakfast. She tells her if she doesn’t then Alejandro will fire her. Odessa says she will save her the trouble and quits.

Genevieve reunites Zoila and Valentina. Zoila apologizes profusely, and then tells her to go get her stuff and come home. Valentina informs her she isn’t coming home, she is going to live with Genevieve.

Carmen breaks the news to Alejandro that Odessa quit. Alejandro is furious, Carmen says it is no big deal they can hire a new maid. He reminds her that they sleep in separate bedrooms and aren’t really together, a new maid will realize that and leak stories. He tells her she has to clean the house like she used to.

Adrian has a nightmare and wakes up screaming. Tony rushes in shirtless. Evelyn heads downstairs to heat him up some warm milk, and Tony follows her to the kitchen. Evelyn rants that she “can’t tolerate weakness.” She tells him to “try to wear a shirt” if he wants to help her and then heads upstairs.

Marisol confronts Nick and wants to know why he didn’t tell her that Dalia committed suicide. He claims he didn’t want to scare her off because he blames himself. He says it is hard to talk about. Marisol makes him promise her there will be “no more secrets.”

The burglars are pawning all of the jewelry they stole from Adrian and Evelyn’s dinner party. The pawn shop owner refuses to buy Evelyn’s ruby necklace because it is “too valuable and too hot to handle.” They walk outside and hand the necklace to a homeless woman.

Rosie is cleaning her porch and Spencer arrives and surprises her. He gives her son a gift and then Rosie rushes into his arms.

Carmen apologizes to Odessa, and begs her to stay. Odessa says she isn’t jealous of Carmen, she is happy for her, but she can’t stand Carmen “treating her like the help.” Odessa breaks down in tears and says she “thought she mattered” to Carmen. Carmen apologizes and Odessa agrees to stay.

Rosie tells Spencer she thinks Peri turned her in to immigration. Spencer reassures her she never would have done that because she doesn’t about them. He breaks the news to Rosie that Peri is pregnant. Rosie begins crying and rushes inside and says they can’t be together.

Valentina is sitting in her car and Remi calls her, he apologizes to her for telling his Mom that she was back. Valentina apologizes and says she has a job interview. She hangs up and knocks on Evelyn’s door, she is applying to be their maid.

Meanwhile Peri is at the Doctor’s office trying to get pregnant, she is apparently not really pregnant yet.

Ethan brags to Opal that Marisol helped him with his Spanish homework, she tells him not to get too attached because “Marisol won’t be around much longer.”