BY Amanda Austin on May 18, 2014 | Comments: one comment
Related : Recap, Television 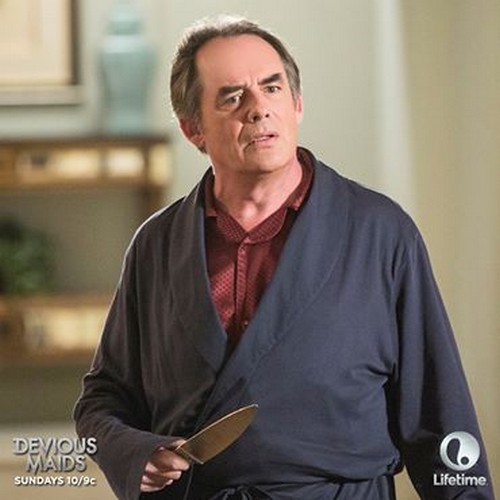 Tonight on Lifetime DEVIOUS MAIDS continues with a new episode called, “The Bad Seed.” On tonight’s episode Nicholas gets jealous over Marisol’s close friendship with her book editor; Lucinda crosses the line with Rosie; a new visitor creates problems for Carmen; Tony makes a decision that troubles Evelyn; Valentina and Ethan get into a complicated situation.

On the last episode Marisol suspected Nicholas may be keeping another secret. Genevieve encouraged Zoila to take a date to a family event in hopes to make Pablo jealous. Wanting to spend more time with Tony, Evelyn concocted a plan to drive Adrian out of the house. Carmen’s new job caused conflict between her and Rosie. Valentina and Ethan got closer, just as Genevieve got some unexpected news about Remi.  Did you watch last week’s episode?  If you missed it we have a full and detailed recap, right here for you.

On tonight’s episode Nicholas is jealous over Marisol’s growing friendship with her book editor. Lucinda crosses the line with Rosie. A new visitor creates problems for Carmen. Tony makes a decision that doesn’t sit well with Evelyn. Things get complicated for Valentina and Ethan.

Tonight’s episode is going to be another fun one, which you won’t want to miss. So be sure to tune in for our live coverage of Lifetime’s Devious Maids Season 2 Episode 5 — tonight at 10PM EST! While you wait for our recap, check out the preview below.

Tonight’s episode of Devious Maids kicks off with Valentina and Ethan making out in a corner of Evelyn’s house. Genevieve barges into the house and informs Valentina she has to come to her house to see Remy. Valentina is shocked, she had no idea he was sick, or back from the Congo.

Rosie’s son is playing in Kenneth’s house, and Lucinda is annoyed because he is making so much noise with his new toy. She is even more annoyed when she learns that her father brought the toy for Miguel. She tells him to “stop being so nice to people he isn’t related to.”

Evelyn is cuddling with her bodyguard Tony and announces she wants to buy him something nice. Tony tells her he doesn’t want a gift, he wants to move into the mansion and out of the guest-house. Evelyn informs him that isn’t an option.

Valentina sees Remy and the first thing he does is apologize about Africa. He announces he wants them to get back together and “start all over.” Afterwards Valentina reveals to Genevieve that she is actually dating her pool-boy Ethan.

Marisol’s editor Kim comes over to go over her book, and Nick is shocked when he realizes Kim is a guy. He is clearly uncomfortable and decides to skip work and crash Marisol’s meeting with Kim. After Kim leaves Nick announces that he is clearly trying to have sex with Marisol, and that he makes Nick uncomfortable. Marisol decides to have Kim over for dinner with them tomorrow so that Nick can see that he is harmless.

Valentina pays Zoila a visit and tells her she needs advice and “apologizes for being such a brat.” She reveals that she loves Remy, but he broke his heart. She cares about Ethan too, but at the end of the day he can hurt her too. Zoila informs her she is not telling her what to do, and she needs to make this decision herself.

Rosie heads out to the grocery store and leaves Miguel with Lucinda. He gets up out of bed and plays with his remote control car. When Rosie returns Lucinda announces that she spanked Miguel, and Rosie is livid. She tells Lucinda is she wants to beat children she should go have her own.

Evelyn finds Tony moving in to a bedroom in her house, and she is not happy. She didn’t want him in the house.

Carmen is hanging out with Spence’s suicidal nephew. Carmen encourages him to have some friends over while Spence is at work.

Marisol, Nick, and Kim sit down to dinner. Kim reveals his wife is divorcing him because he slept with one of his writers on a book tour and then announces he wants an “ethnic girl like Marisol”, Nick was clearly right about Kim after all.

Carmen heads to the store to get snacks and returns and finds Ty is having a rager, the house is full of hundreds of teens. Carmen tells him to kick everyone out. He argues that if she shuts down his party he will be depressed and might try to commit suicide again. Carmen sneaks outside and calls 911 and asks them to send a cop over.

Ethan pays Valentina a visit and tells her that if she wants he will step to the side so that she can get back together with Remy. She kisses him and it looks like she may have finally made her decision.

The cops show up at Spence’s house to shut down Ty’s party. Carmen’s plan backfires and she and Ty wind up being arrested and thrown into a cell together. While they are arguing in the cell Carmen mentions that she loved Alejandro and he died in her arms. Ty feels horrible, Carmen has no idea he was involved in Alejandro’s death.

Kim leaves and Nick and Marisol begin arguing. Nick confesses that “when he becomes jealous he is not himself,” and then he kisses Marisol so hard that he hurts her. She steps backward…shocked.

Valentina pays Remy a visit and confesses to him that she is seeing Ethan, he understands and tells her that she “deserves the best.”

Rosie accidently knocks the statue that Lucinda has been making down on the floor and breaks it. Lucinda walks in and thinks Miguel broke the statue. She forces Rosie to punish him so she yells at him in Spanish, little does Lucinda know she is actually talking about ice cream in Spanish and not really yelling at him.

Later Lucinda walks in the livingroom and sees Miguel playing with Kenneth, she rushes out obviously upset. Rose follows her and asks what is wrong. Lucinda confesses that when she was 15 she had a baby and Kenneth made her give the baby up for adoption. She doesn’t understand why her Dad wouldn’t let her keep a baby, but he let Rosie move her kid in to the house. She reassures Rosie she doesn’t have a problem with Miguel, she has a problem with her Dad.

Remy gets out of bed and heads downstairs to Zoila and Genevieve. He begs Zoila to talk to Valentina and convince her to give him another chance, but Zoila informs him she doesn’t meddle anymore and there is nothing she can do. After Zoila leaves Genevieve promises Remy she will get Valentina back for him.

Ty heads outside to take the garbage outside after he gets home from jail and Ethan is waiting in the shadows for him. Apparently Ethan was one of the guys that robbed Alejandro’s house with Ty, and he threatens that if Ty tells anyone about Alejandro they will all tell the cops that Ty is the one that killed him.