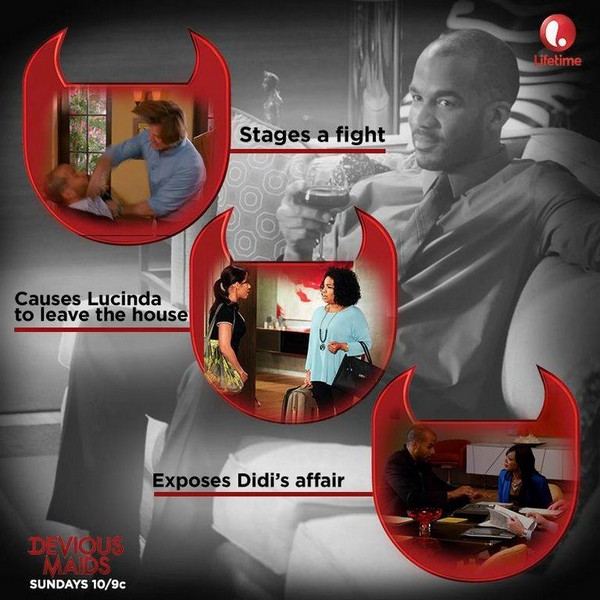 Tonight on Lifetime DEVIOUS MAIDS continues with a new episode called, “Long Day’s Journey Into Night.” On tonight’s episode Marisol is shocked by a secret that Nicholas reveals. Meanwhile, Rosie pledges to save Kenneth after a mysterious fall.

On the last episode, unbeknownst to Rosie, Reggie moved forward with his plans to tear apart the Miller household. Genevieve was surprised when her estranged mother (June Squibb) showed up at her door thanks to Zoila. Marisol dealt with a gossipy new hire at the Deering mansion. Ty’s obsession with Carmen took a violent turn. Adrian began to suspect Tony may not be who he claimed. Did you watch the last episode? If not we recapped it all here for you.

On tonight’s episode Nicholas decides to reveal a shocking secret that takes Marisol while in a pill induced haze. In the meantime after an unknown fall Rosie decides that she will save Kenneth; Zoila does the unthinkable and makes Genevieve face her mother against her own will. While this is going on Valentina looks for help from Remi, asking her to aid her with Ethan and Spence receives some bad news making him and Carmen become closer.

Tonight’s episode is going to be another fun one, which you won’t want to miss. So be sure to tune in for our live coverage of Lifetime’s Devious Maids Season 2 Episode 10 — tonight at 10PM EST!

Tonight’s episode of Devious Maids kicks off with Zoila struggling to get along with Genevieve’s mother, who has taken up residence at Genevieve’s mansion since she learned about her daughter’s health problems. Genevieve abandoned Zoila and let her go with her Mom and ran away to a spa.

At Spence’s house, Carmen is rewatching her scenes on the news. She has received a lot of press since she stabbed one of the robbers (Ethan) that were interrupting Spence’s party. Spence receives a phone call from his divorce lawyer, he hangs up and smashes a vase because he is so furious.

In the hospital, Nick is popping pain pills and high as a kite and rambling to Marisol. He says, “I didn’t mean to kill him, he was right in front of me.” Marisol tries to ask him what he is talking about, but he is less than helpful.

Rosie is helping Kenneth into bed, she reveals that her nephew Reggie is planning on selling his painting in the living. Kenneth protests, but Rosie reminds him he gave Reggie power of attorney, so he can do whatever he wants.

Carmen finds Spence getting drunk in the kitchen, drinking away his sorrows because his ex-wife got custody of his son. He makes a deal with Carmen and gives her the day off tomorrow if she will get drunk with him.

Marisol pays Nick a visit at the hospital the next day and tells him that he was rambling about killing someone when he was on his meds. Nick denies it, but Marisol isn’t convinced.

Kenneth corners Reggie and tells him to sign over his power of attorney. He has been looking at his accounts online and there is money missing. Reggie tells him he is being paranoid and yanks his cane out of his hand.

Genevieve and Zoila return home, and Genevieve gives her Mom a long speech about treating her like crap her entire life and how she doesn’t need her negative energy. Zoila is commending Genevieve on finally standing up to her Mom, and then her Mom drops to the floor. She is rushed to the hospital, a few hours later Genevieve returns from the hospital in tears because her Mom isn’t dead. She just has a minor heart problem.

The next night Spence tries to get Carmen to get drunk with him again. At first she refuses, however he bribes her by agreeing to pay $2000.00 to get the transmission on her car fixed.

Remy reads in the newspaper that one of the burglars at Spence’s house was stabbed in the side. He rushes over to Valentina’s and shows her the article. He tells her that they are both going to be accomplices and go to jail for helping Ethan. She confronts Ethan and he confesses that it was innocent at first and they were just “stealing from the rich and giving to the poor.” She tells him that he needs to turn himself in and she will forgive him.

He refuses, he doesn’t want to go down for murdering Alejandro. He wants Valentina to run away with him, and she says it isn’t an option. Valentina walks out on him and drives home. She swerves her car on the way home while she is crying and a cop pulls her over. The cop sees blood all over her back seat, and tells her that she has to come down to the station with him.

Carmen refuses to get drunk with Spence again and gives him a speech about getting his act together and drinking every single night. He tells her he is going to change his ways and then pours himself a drink after she leaves the room.

Reggie surprises Rosie with an expensive necklace and she tells him she can’t take it and wants to know where he got the money from. He convinces her to just try on the necklace and tells her how beautiful she looks in it.

Marisol heads to the hospital and tries to drug Nick so that she can get some information out of him about the person he supposedly killed. Nick tells her he doesn’t need any pills, so she brings him a glass of juice with pain killers in it. He is on to her and refuses to take the pills. He finally snaps at her and yells at her to “stop trying to drug him.” Marisol calls him out and says she knows Opal was blackmailing him, she begs him to tell her the truth. He continues to lie and says he isn’t a murderer, Marisol gives him back the wedding ring and says that she is moving out. He calls for her to come back but she storms out of his hospital room.