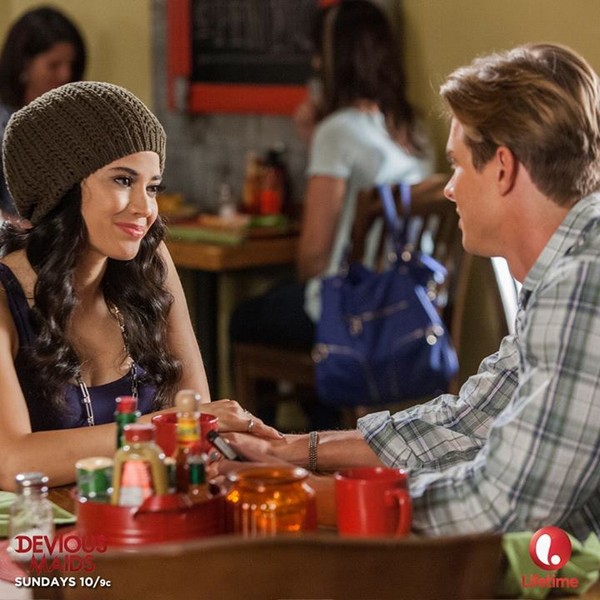 Tonight on Lifetime DEVIOUS MAIDS continues with a new episode called, “Proof.” On tonight’s episode when Nick refuses to divulge his secret past, Marisol sets off on a quest to find out the truth. Zoila struggles with her feelings for Javier and Pablo. Carmen must play babysitter to Spence’s son.

On the last episode, when Marisol confronted Opal about Nicholas’ accident and threatened to turn her into the police, things took a violent turn. Valentina found herself in trouble, bringing Zoila and Pablo together to help her. Rosie continued to investigate her suspicions about Reggie. Carmen attempted to help Spence when his drinking starts affecting his job. Adrian learned the truth about Tony. Did you watch the last episode? If you missed it, we recapped it right here for you.

On tonight’s episode when Nick refuses to divulge his secret past, Marisol sets off on a quest to find out the truth. Zoila struggles with her feelings for Javier and Pablo. Carmen must play babysitter to Spence’s son. Rosie recruits Lucinda and Didi to work together to rescue Kenneth and put a stop to Reggie’s financial thievery. Valentina tells the police what she knows about Ethan and his crew.

Tonight’s episode is going to be another fun one, which you won’t want to miss. So be sure to tune in for our live coverage of Lifetime’s Devious Maids Season 2 Episode 12 — tonight at 10PM EST!

Tonight’s episode of Devious Maids picked up where we left off last week, Opal has just shot herself in the head. The next morning Carmen and Rosie head over to comfort her. Nick arrives and apologizes to Marisol for having to see Opal kill herself. Marisol reveals that she knows Opal pushed Delia off the bridge, and that Nick must have killed someone too or else he wouldn’t keep the secret. Nick tells her it isn’t what she thinks, but he is more worried about where Opal’s apartment is. Nick rushes off to figure out where Opal was living so he can get a watch back that she let her borrow.

Zoila wakes up next to Pablo, and realizes she had sex with him the night before. She heads out to the kitchen to get her and Pablo a cup of coffee and Valentina catches her. She thinks that Javier is in her bedroom. But, then the doorbell rings and Javier is at the door. Zoila heads to the park with him, and then Pablo comes out of the bedroom, and announces he and Zoila are getting back together to a confused Valentina.

Genevieve visits Adrian and asks him if he would donate a kidney to her, she reminds him that he hit on her at a Christmas party a few years ago, so she thought they were close friends. Adrian tells her he is pretty fond of his kidneys and he won’t be giving her one.

Rosie tries to talk to her son and warn him that they might get sent back to Mexico, but they have to help Mr. Kenneth “protect his treasure.” At the high-school the cops are going through Ethan’s locker, Ty and his friends begin panicking because the cops are interviewing students and trying to figure out what other kids he was working with to rob houses.

Spence is in rehab, Pery’s personal assistant knocks on the door and drops off their baby. He says that Pery’s nanny got arrested in Rome, and she can’t watch the baby because her movie doesn’t wrap for another week. Carmen refuses to take the baby, but the assistant says that if she keeps the baby alive for a week Pery will reconsider her custody agreement with Spence and let him see the baby more. Carmen agrees, and takes the baby in.

Ty and his two friends head to Ethan’s house and realize he has left town. They think they should leave town too. Ty decides he will talk to Valentina and see if she even knows they were part of the burglary ring.

Rosie meets Lucinda and Dee Dee at a restaurant and informs them that Kenneth is in trouble and he needs them. She explains that Reggie put him in the hospital.

Zoila sits down with Javier and decides to be honest with him. Before she confesses that she slept with Pablo, he reveals that he bought them two tickets to Paris. She is so moved by the gesture, she changes her mind and doesn’t come clean to him about her romp with Pablo the night before.

Marisol spends the entire night ransacking Opal’s apartment, but she can’t find whatever it is that Opal was using to blackmail Nick. The next morning Nick arrives at the apartment, and finds Marisol sleeping on the couch. Nick asks Marisol if he were to confess to doing something on accident if she would still love him. Marisol warns him that whatever Opal had on her, he will find it. Nick says that she will “wish she hasn’t.”

Carmen has an audition for a salsa commercial, and has no idea what to do with Baby Tucker. She heads to the audition and ties Tucker to the chair in the waiting room. He interrupts her audition by screaming and the woman in charge heads out to the waiting room and finds Tucker tied to the chair, she calls Carmen a “monster.” Rosie comes over to Spence’s house later, and helps Carmen put Tucker down for a nap. Rosie thinks that Carmen should consider having a baby of her own so that she has something to give her joy in life, but Carmen reassures her that she won’t need a baby because her dream is going to come true.

Zoila heads to Genevieve’s house and finds her crying, she reveals that she can’t find a donor and the doctor says that she needs a kidney ASAP. She cries that she “doesn’t want to die just yet.” Zoila wants to get tested and see if she is a match, Genevieve finally caves and agrees to take her kidney if she is a match.

Marisol realizes that Opal has a key to a safety deposit on her key ring and heads to the bank hoping that is where she stashed whatever it is that she is blackmailing Nick with.

Reggie finds Rosie moving out, and meets his new maid. She promises him she won’t tell anyone about his “creative accounting” and what he did to Kenneth as long as he doesn’t mess with her and her son’s green cards.

Rosie, Dee Dee, and Lucinda head to the hospital where Reggie sent Kenneth to break him out.

Zoila arrives at home and finds Pablo sitting in the living-room, she reveals to him that she isn’t going to take him back, and he shouldn’t look too far in to their hook-up. He begs her to take him back, but she says she is going out of town and they can talk about it when she returns.

Rosie, Kenneth, Dee Dee, and Lucinda head back to their house and reveal that they have proof that Reggie stole form Kenneth’s accounts. Kenneth kicks Reggie out of the house, and as he is leaving he tells Rosie to pack her bags, because he is going to see to it that she is kicked out of the country.

Genevieve gets a phone call from her doctor and learns that Pablo got tested and he is a perfect match and he is going to give Genevieve a kidney. Meanwhile, Ty and his friends are putting together a scheme to kill Valentina so that she can’t testify against them in court.

Marisol has Carmen do her make-up so that she looks like Opal and then she heads to the bank to open Opal’s safe deposit box. All that is in the box is a yellow envelope. She opens the envelope and finds a bloody piece of fabric and a newspaper clipping. She reads the article and then gasps, “oh my God.”