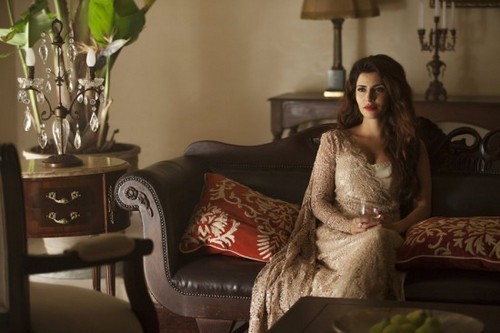 On last week’s episode Alex began his training with Michael, but soon after had a vision that caused him to go rogue during an Archangel Corps mission. Elsewhere, Claire went out on a limb to protect Riesen, however she couldn’t stop his long-held secrets from coming back to haunt him; and David made a move to secure his power. Did you watch the last episode? If you missed it we have a full and detailed recap, right here for you.

On tonight’s episode Alex takes on the not-so-easy task of trying to exorcise captive eight-balls of their angel possessors, and enlists Michael and Claire for help; David closes in on William’s underground acolytes; at the same time, Riesen overturns David’s plan to usurp power with a new alliance.

Dominion airs at 9 PM on SYFY and we will be live blogging it with all the up-to-the-minute details. So make sure to come back to this spot and spend the evening with us! Make sure to refresh often to get the most current details and updates! In the meantime, check out the sneak peek video of tonight’s episode below.

Tonight’s episode of Dominion begins with Michael and Alex, Alex shows him the old casino vault where he has the 8-Ball held hostage. Michael tells him he screw up and he was supposed to have executed her, he argues that she is Claire’s mother. Alex wants Michael to help him bring Claire’s mom back, but Michael warns him that it is incredibly dangerous and nearly impossible. Michael doesn’t want to hear it, he says it is a risk he is willing to take.

Claire reveals to Riesen that she found the gift he left her. She opens the music box and music plays, she says she recognizes the music from a song her mom used to sing to her. Her Dad asks her to help him with David Wheel, and the no-confidence vote. She agrees to come to the meeting.

Michael decides to help Alex, and sets out to get the Apocyphra, a tool needed to evict an 8-Ball. He knows that Alex won’t be able to save Claire’s mom. But he thinks that “failure is a grand lesson.” Once Alex gets the book, Michael reveals to him that there has never been a successful eviction. The only way to save Claire’s mother is for Alex to decipher the prayer in the Apocyphra book. As he hold his hand over the Apocyphra, more tattoos begin spreading on his body. Michael is shocked that Alex can read the prayer.

Michael heads back to the vault where Claire’s mother is being held. She begs him to spare her, but he reminds her that she took a life and is part of Gabriel’s army. She argues that she has done nothing but respect her vessel and has lived a life of redemption, Michael storms out.

In the middle of the meeting with Claire and her Dad’s meeting, Claire receives an urgent message. Alex is waiting for her outside, he tells her it is urgent and she needs to come with him. He takes Claire back to the vault with him, as she looks through the window at her chained up mother, she is in shock.

Claire asks Alex how much her father knows about her mom. Alex reveals that Gen. Riesen knows everything about her, he used to keep her outside of city walls and he was having a relationship with her. Claire tries to leave, but Alex begs her to talk to her mom. He wants her to see that there is a chance to save her. Claire insists there “is no hope for her mother.”

Meanwhile Claire’s father General Riesen continues his meeting with Arika, he informs her that they have a common enemy. And any time now Gabriel could decide to go after Helena. Arika reminds him that Helena is the Queen, and the Queen isn’t going to enter the war until Gabriel comes after her.

Claire caves and goes in the vault to talk to her mother, although she is certain that her mom is no longer in side the 8-ball. Claire’s mom reveals that she is the one that left the music box in her room. Her mom pleads with her, and even calls her by her childhood nickname “Izzie.” Claire leaves the vault and confesses to Alex that there is a chance her mom might still be in there.

Alex and Claire head back in to the vault with the Apocyphra. Claire tells her mom they are going to help her. Alex and Michael begin chanting the prayer from the book. Claire’s mom begins writhing on the floor and squealing. Suddenly she stops, and her eyes turn blue. The eviction worked, Claire’s mom is back and the demon is gone. Claire and her mom both sob as they hug each other. Suddenly Claire’s mom drops to the ground and begins gasping for air. Michael reveals that her mom is gone and there is nothing he can do. Claire blames Alex and runs out of the vault.

David Whele arrives at the meeting, and General Riesen reveals that he knows David is working with Arika. Riesen announces that David was conned by Helena and all they have is one bomber. Riesen is sending Arika back to Helena to get rid of Evelyn and take over Helena. And Riesen informs him that he missed the no-confidence vote and it was unanimous.

Claire heads home and confronts her dad. She tells him that she knows everything and she spoke with her mom. Claire says she understand why he did it, but the people of Vega won’t trust him. She tells him that as soon as the wedding is over, he has to tell the city that he has done everything he possibly can, and then he must step down. She doesn’t trust him anymore.

William pays David a visit, he tells his father that the guards he sent won’t be returning because he will protect his acolytes at all costs. David sneers, “nothing will save you from this betrayal.” William pulls a gun on his own father and puts it up to his head, he can’t pull the trigger, instead he beats him over the head with the handle of the gun.

David wakes up and his hands are tied behind his back, William removes a bag from his head and he is in a room surrounded by candles. William reveals that he is going to “take him to the light of Gabriel. They tie a rope around his chest and use a tool to keep tightening it, while David screams in pain, and William and his men chant “in Gabriel’s name.”

Claire heads back to the vault where her mom is still gasping for air. She kneels on the floor next to her and hums to her while she holds her hand over her mouth and suffocates her, putting her out of her misery.