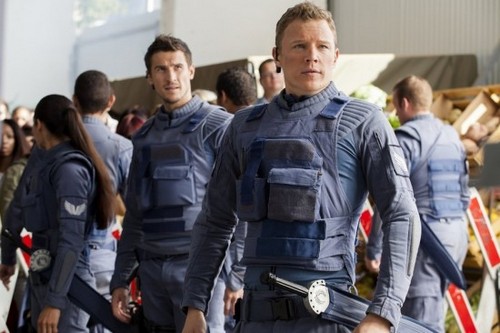 Syfy’s series Dominion continues with a new episode tonight called, “Ouroboros.” On tonight’s episode, Alex is called upon by Michael to help prevent any further casualties after innocent higher angels turn up dead in Veg.

On last week’s episode Alex took on the not-so-easy task of trying to exorcise captive eight-balls of their angel possessors, and enlisted Michael and Claire for help; David closed in on William’s underground acolytes; at the same time, Risen overturned David’s plan to usurp power with a new alliance. Did you watch the last episode? If you missed it we have a full and detailed recap, right here for you.

On tonight’s episode Alex is called upon by Michael to help prevent any further casualties after innocent higher angels turn up dead in Vega; at the same time, Gabriel causes tension by revealing a long-hidden secret; William “re-educates” his father; and Noma reignites an old flame.

Dominion airs at 9 PM on SYFY and we will be live blogging it with all the up-to-the-minute details. So make sure to come back to this spot and spend the evening with us! Make sure to refresh often to get the most current details and updates!

Gabriel had a found inside of Vega and he did it by taking over control of another higher angel’s body but what are his plans now that he’s inside?

Neither Michael nor Alex even know that he’s that much of a threat. They’re too busy honing Alex’s new skill. Since he was able to free Claire’s mom he’s been trying to find a way to separate the human and the angel overlord from each other without the host body dying on him. And so far he’s failing.

Michael wanted him to give up and for the longest Alex was stubborn but after yet another failure – he was so downtrodden that he sought comfort in Noma’s arms. Meanwhile the real love of his life, Claire, has recently been trying to be a bit more receptive towards William’s overtures. After all they are engaged and seeing as Claire wants to push her own father soon out of power then she might actually find something in common with William.

William passed up the chance to kill his father last week and chose instead to re-educate the man about the glory of Gabriel. He wants to manipulate the man into becoming another one of his acolytes however he forgot who he was dealing with. David is going to do everything in his power to try and escape. So rather than deal with that on daily basis maybe he should have just killed the old man and saved himself the trouble. It’s not like his hands aren’t full in dealing with Vega business.

Vega is already in a panic thanks to Gabriel. He’s been killing higher angels that have remained neutral or refused to join him. And he’s not doing it quietly. Gabriel is making a spectacle of his kills and with the good people of Vega now alerted to the fact that angels have been living amongst them without their knowledge – there’s mass panic in the streets.

Gabriel wanted to go after only the neutral angels in Vega because that was his plan to draw out Alex. He guessed that Michael would send him in to help the other angels and so the first thing he did to find his way into Vega was to threaten his sister.

He attacked Uriel and told her he would cut off her ears so that she never heard Chopin again. So she was compelled into giving him the list of higher angels in Vega and he worked his way on his own from there. She didn’t think he could possess a higher angel and yet he did which was something out of his power range. So he’s getting stronger somehow and what little sentiment he had for his siblings is also disappearing.

But Gabriel does have a plan in that mess of a head. He wants to turn Alex against Michael and that involved revealing some of Michael’s secrets. Gabriel showed Alex that Noma was a higher angel. He wanted to shake Alex’s blind faith in Michael and he managed to do that with one action – revealing Noma.

By time Michael came back, Alex almost worked himself up into hating him. He was tired of feeling lied and was angry at Michael for manipulating him for so long. Though Michael had his reasons and he wasn’t afraid to admit to them. Alex is reckless and he needed protection sometimes from himself. Even given a few words, he questioned everything, and never once suspected Gabriel’s hand in all of this.

It was Michael that realized his friend Louis was possessed by Gabriel but it was Alex that willed his strength to cast the angel out.

And that confirmed he was the chosen one to Gabriel and Uriel. Apparently, the brother and sister duo were working together this whole time. They merely wanted to know for sure that Alex was the man they sought and now that they do – may the second great flood begin.

Everyone mistook Noah’s flood to mean there was an actual flood but Gabriel told Alex that Noah hadn’t built a boat – he built a shelter. It was supposed to protect the humans from a different kind of cleansing. One that involved angels killing off humans.

In those times, it was Michael that loved to kill humans and his siblings that had to stop his bloodlust!