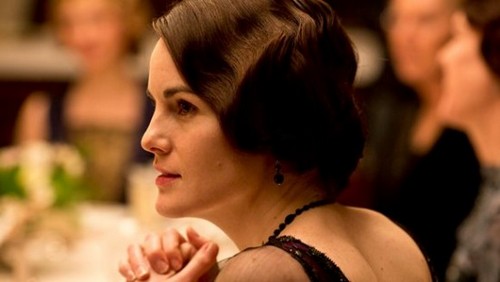 Tonight on PBS a new episode of their popular drama DOWNTON ABBEY.  On tonight’s episode “Downton Abbey” continues with the Crawleys hosting a party for friends and acquaintances, including Lord Anthony Gillingham, who has eyes for Mary, and Gillingham’s valet, who is attracted to Anna.

On last week’s show Mary began the road to recovery from the loss of her beloved Matthew. While she appeared to have made a big step forward, there was still lingering issues that haunted Mary and Isobel.

On tonight’s show An extravagant house party at the Abbey gives the Crawleys a chance to reconnect with old friends and culminates in a performance by opera singer Dame Nellie Melba. Among the guests are the eligible Sir John Bullock, who soon attracts the attention of Lady Rose; Gregson, who is keen to win Robert’s approval if he is to make a future with Edith; and Mr Sampson, a slightly mysterious acquaintance from Robert’s gentleman’s club. Some guests prove more welcome than others and along with the celebrations come skulduggery and heartache.

Tonight’s Downton Abbey season 4 episode 2 is going to be great, and you won’t want to miss it. So be sure to tune in for our coverage of Downton Abbey — tonight at 9 PM EST!  While you wait for our recap, hit the comments and let us know how excited you are about the new season of the Downton Abbey? Check out a sneak peek video of tonight’s episode below.

As guests begin to arrive and the festivities begin at the Abbey, the evening kicks off with just enough drama to keep us all glued to our screens.

Edith tried endlessly to arrange some time alone or even brief banter between Michael and Robert, to no avail. Each of her attempts is quickly shot down by empty excuses from Robert. Deflated, Michael does not give up and asks to join a poker game that he knows Robert plans to partake in.

Meanwhile, as Mary continues to heal from her loss, she ends up finally having an enjoyable conversation while horseback riding with Lord Gillingham, who was deliberately invited to attend the house party in an effort to help Mary feel better. Though Mary tries to encourage others to join them the next day for the ride, there are no takers. She ends up riding alone with Gillingham and having an enjoyable time. Their discussion leads to her sharing her concern over Downton’s tax bill with Gillingam offering advice from experience. Mary feels relieved that she is not alone in her concern, knowing others have faced similar issues.

Though hesitant, Isobel agrees to attend the party after some encouragement. She shares her grief and reason for not wanting to feel happy just yet. Working through the guilt, she attends the party, only to feel bitter upon later seeing Mary smiling and engaging in light banter with Gillingham.

Throughout the episode, Tom struggles as he feels like “a fish out of water.” He tried to share his feelings of not feeling like he belongs but they fall on deaf ears. After escaping to be alone, Edna sneaks him a tall glass of whiskey. She encourages him to drink it though even he comments on how large the glass of whiskey is. He begins to drink and takes off. Edna seems pleased as though she had a plan. Later, Edna sneaks into his room, so her plan may have worked. We’ll have to wait until the next episode to find out what actually happened behind closed doors.

As guests began to dance, Mary, who first declines Gillingham’s invitation to join him, cannot get by on her excuse and ends up joining him for a dance. As she begins to enjoy herself a bit she notices the music is coming from a familiar gramophone…it was Matthew’s. She runs off to her room and is shortly joined by Anna who asks what is wrong. Mary explains the gramophone goof and Anna empathizes with her agreeing about the bad decision to bring it down from the attic. Mary opens up to her and explains that though her grief is still strong, she also deals with the loss of her former self. She feels as though she is not the same person, and no longer as strong or happy as she was before.

Meanwhile, after a sore loss to Samson after the first night of poker, Robert is upset to have allowed himself to play someone who knew the game so well. Michael plays his cards well (no pun intended) by winning Robert’s money back for him (and the others who lost) after playing a little dirty with Samson, not allowing him to get away with rigging the game and cheating the men.

Molesley has been hired as a footman by Carson to help at the event. Though feeling down and out, he tried to keep a good attitude, knowing he doesn’t have many options and must take what he can get. Downstairs, Mrs. Patmore suffers what is first believed to be a heart attack. After a doctor visit she received confirmation that stress brought on the sharp pains leaving her gasping for air. While everyone is relieved, that comfort doesn’t last long. From the arrival of Lord Gillingham, his valet Mr. Green continually attempts talking and flirting with Anna to no avail. He seems bothered that he keeps getting interrupted by Mr. Bates. Later, while the scene has shifted to the guests and staff listening to the invited opera singer, they sit quietly enjoying her beautiful voice and Anna excuses herself to take care of her headache. Unfortunately, the lovely voice of their special guest drowns out Anna’s screams as she attempts to escape the grasp of Mr. Green while alone downstairs with him. He tells her that Bates must not satisfy her to which she becomes uncomfortable and repels his unwanted words and hands. We see Green pulling her as she screams.

Shortly after, Mrs. Hughes finds Anna hurt and scared, crying and ashamed after being raped by Green. She encourages Anna to tell Mr. Bates or at least allow the doctor to see her. Anna begs her not to say a word, to help her get cleaned up, and to bring her a change of clothes. Later, her husband questions her on her change of clothes, and why she failed to return. He sees that she is shaken and is concerned. She provides many excuses, stating that she had a fall. Just as she is trying to calm his fears, Green says goodbye to them both, looking eerily at Anna as she tries to hold it together. Be sure to tune in to find out what happened in Tom’s room and how Anna will deal with her horrifying secret. You know we’ll have all the details for you!