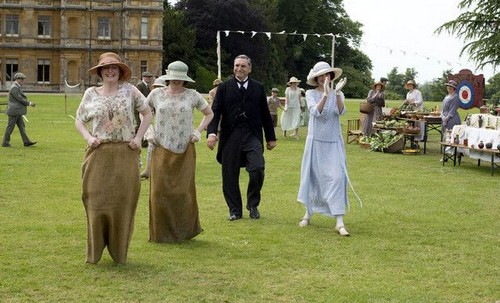 Tonight on PBS a new episode of their popular drama DOWNTON ABBEY.  On tonight’s episode as “Downton Abbey” continues, Robert and Thomas return from America; Bates takes a day off; Edith and Rosamund announce their plan to travel abroad; a suitor woos Mary; and Rose makes her move.  Did you watch last week’s episode?  We did and we recapped it right here for you.

On last week’s episode Mary and Mr. Blake got their hands dirty in caring for the newly arrived pigs, which earned them mutual respect. Lady Rose continued to charm singer Jack. Tom Branson took again some interest in politics, where he made a new acquaintance. Edith strugglesd with life-changing decisions. While Robert and valet Thomas were in New York, Mary found herself wooed by several suitors. Lord Gillingham spent some more time at Downton, accompanied by his unpleasant valet Mr. Green. Anna therefore felt under pressure and finally confided in Lady Mary.

On tonight’s episode Rosamund hatches a plan to help Edith out of her predicament, but will Violet see straight through it? Isobel is on the receiving end of some unexpected attention, while Mary asks Gillingham for a favour. Rose has her nose put out of joint when plans don’t go her way, and Alfred realises too late that he may have made a mistake. Just when Bates and Anna seem to be coming through the worst of their troubles, some unexpected news gives her fresh cause for concern.

Tonight’s Downton Abbey season 4 episode 7 is going to be great, and you won’t want to miss it. So be sure to tune in for our coverage of Downton Abbey — tonight at 9 PM EST!  While you wait for our recap, hit the comments and let us know how excited you are about the new season of the Downton Abbey?

Tonight on Downton Abbey Robert and Thomas return from America; Bates takes a day off; Edith and Rosamund announce their plan to travel abroad; a suitor woos Mary; and Rose makes her move.

Back at Downton, Rose makes plans for another date. Baxter starts snooping around to find out what may be going on with Anna and Bates. She tries to gain a confidante in Molesely. Violet is doing much better. Mary is coming around with Mr. Blake and is pleasantly surprised when he happily offers to hold her crying son.

Mary tells Anna Gillingham is coming back. When Anna seems upset, Mary believes it is because Anna thinks Mary is making a mistake to have him back. However, Mary sees the look in her eye, and knows there is more to it. Anna confesses to Mary that it was Green who raped her. Mary is shocked and wants to tell Gillingham or the police. Anna makes her promise not to tell and shares her concern about Bates. Bates asks questions of Anna that lead him to believe he knows it was Green who raped her.

Tom drops Isobel off to run errands and happens to see Rose and Jack on a date. Rose thanks him for his visit and inquires about the length of his trip. He confirms he is there for work and can stay for as long as he’d like. She tells him she’d like him to stay forever. Back in the car, Tom tells Isobel he is thinking of two people and their situation which may make others unhappy. As they leave the car, Ms. Bunton, the woman from the political meeting, happens upon them. They talk for a little while before she walks off, but not before telling Tom where she works.

Tom visits Mary and tells her about seeing Rose, but doesn’t want to get more involved than that. Later, Edith shares her idea with Rosamund to involve the farmer tending to the pigs in a plan to keep the baby. Rosamund believes it is a reckless plan and suggests she and Edith leave the country. Rosamund, quickly on her plan, tells Cora her idea to go to Switzerland and take Edith with her. At dinner, Gillingham shares what he’s been doing with his time. Gillingham and Blake seem tense as they seem to fight for Mary’s attention.

Mary sees Rose and tells her to come speak to her. Mary tells her what she knows about Jack. Rose proclaims her love for Jack and states that she is planning to marry him. Rose tells Mary she wants to see her mother’s face crumble when she tells her. The next day, Blake is leaving and Gillingham gets Mary alone. He tells her he has decided to call off his engagement. Mary tells him she is not “free” and don’t think she will be.

Violet asked Rosamund and Edith to talk with her and shares her suspicions that something is going on between them. Edith is forced to tell her. Later, the two talk and discuss possible plans. The triangle between Ivy, Daisy and Alfred seems to continue as he announces another visit. This, after proposing to Ivy via letter, and her writing back to turn him down.

Rose explodes with her good news to Mary…she is engaged. Mary must go to London, so Anna shares with Bates that she’ll be going along. Bates asked Carson if he can go to York tomorrow. Interestingly, this is where Green mentioned he’d be. When Rose hears Mary is going to London she asks to tag along. Cora seems bothered that she wants to leave again. Mary immediately shuns her request.

Tom, on his way to see suppliers, catches his new mystery woman on the side of the road with car trouble. While she tells him her friend has gone for help, he jumps right in. The engage in some light banter and he gets her on her way.

In London, Mary goes to see Jack Ross. Mary tries to offer some guidance and advice. Mary tells Jack that she thinks Rose is more motivated to upset her mother than to spend her life with Jack. He admits he loves her but he does not want them to marry for fear it will ruin her life. He feels people will look down on her.

Mary tells Anna that she is going to talk to Gillingham and tell him to dismiss Green. She assures Anna she will not give a reason. Anna is scared, but Mary assures her it will be okay. At lunch the next day, Mary tells Gillingham he must let go of Green. She does not break her promise despite his asking for more details. He agrees to comply because of his love for her.

Later Anna overhears that Bates was in York while she was away in London. But he doesn’t not provide any details of what he was up to. After Rose receives a letter from Jack calling off their relationship, she is devastated and compares Mary to her mother while at the bazaar.

Robert and Thomas arrive back from America. Surprisingly, Violet has been supportive to Edith. At the bazaar, Mary is told Gillingham is back. She sees him and approaches him immediately. He came to tell her that he intended to fire Green but when he arrived back, Green was dead from what he thinks was a fall. Mary is shocked. Gillingham came personally to tell her because of how strange it was that he knew something Green had done was terrible, though he didn’t know what it was, and now he is dead. When asked, Mary says she still cannot tell why she told him to fire Green. Mary tells Anna, and though Anna seems worried about Bates, she oddly says she is relieved that many people saw the “accident” of Green falling. At the bazaar, Baxter flirts mercilessly with Molesley. Molesley sees Thomas asking Baxter for information and quickly steps in and whisks her away.

Alfred is leaving, but Daisy rushes to get back before so she can say goodbye and really know it is over. Alfred seems to have a change of heart and says that he should have realized how much she loved him all along. Daisy knows it is best to let go and says goodbye. Blake professes his love for Mary as well. Mary tells him she is not interested, but he confirms he is ready for a fight.

Anna asks Bates about his time in York. Since she didn’t tell him it was Green who raped her, she cannot come out and ask about Green’s death. Bates does not offer any information.