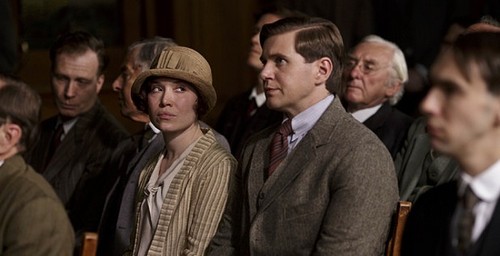 Tonight on PBS a new episode of their popular drama DOWNTON ABBEY.  On tonight’s episode as “Downton Abbey” continues, Robert and Thomas leave on an unexpected trip; Mary and Blake bond over pigs; and Green returns to Downton with Gillingham.  Did you watch last week’s episode?  We did and we recapped it right here for you.

On last week’s show a birthday party is planned for Robert, but Rose’s surprise contribution to the event ruffled feathers above and below stairs. A new farming venture on the Downton estate came with dramatic repercussions for Mary, and Edith received more unwelcome news.

On tonight’s episode Mary and Mr. Blake get their hands dirty in caring for the newly arrived pigs, which earns them mutual respect. Lady Rose continues to charm singer Jack. Tom Branson takes again some interest in politics, where he makes a new acquaintance. Edith struggles with life-changing decisions. While Robert and valet Thomas are in New York, Mary finds herself wooed by several suitors. Lord Gillingham spends some more time at Downton, accompanied by his unpleasant valet Mr. Green. Anna therefore feels under pressure and finally confides in Lady Mary.

Tonight’s Downton Abbey season 4 episode 6 is going to be great, and you won’t want to miss it. So be sure to tune in for our coverage of Downton Abbey — tonight at 9 PM EST!  While you wait for our recap, hit the comments and let us know how excited you are about the new season of the Downton Abbey?

Tonight’s episode starts with Bates receiving word that Robert has been summoned to America and Bates is expected to make the trip as well. There is an issue with Cora’s brother. Mrs. Hughes tries to plead her case to Mary, in hopes she can help ensure Bates can stay so he can be back with Anna. Mary says she will not consider helping unless she knows the reason the staff does not want to do what they are paid to do. Cora is later seen begging Robert to take Thomas instead. Cora admits to knowing a bit of what happened. She assures Bates it was not his fault or Anna’s fault for what happened to Anna. Later, Anna thanks Mary and Mary shares that she was told about the attack. Mary tries asking for details about the attacker. Anna sticks with the story about it being a stranger. Mary begs to help but Anna states she cannot talk about it.

Carson shares how upset he is about Bates not going with Robert to America to Mrs. Hughes. Cora tells Robert how grateful she is for going to help her brother. Thomas tries to find out why he is going on the trip rather than Bates and tells Baxter that he expects her to find out while he is away. Nosy Baxter tries to get some information out of Carson, but fails when Mrs. Hughes steps in.

Mr. Blake continues to infuriate Mary, but there is an obvious chemistry between the two and it is obvious Blake is quite fond of Mary. Once the house is quiet, Blake asks Mary if the pigs have arrived. She tells him they have and she will go with Tom the next day to see them. He talks her into going with him. He notices a pig is very sick and takes action. Mary steps in to help and they both end up dirty and with a mutual attraction they can now see more clearly. Mary makes scrambled eggs for the both of them as the staff has already turned in and he is quite impressed.

Violet was feeling ill and asks for a car to get her home quickly. Later, Isobel goes to visit and finds a very sick Violet in bed. Later, a doctor confirms she has bronchitis. He shares with Isobel how dangerous this is. Isobel refuses to leave and vows to stay to take care of Violet.

Tom goes alone to a political talk that he was planning to attend with Isobel. Tom ends up meeting a nice woman who he ends up sitting next to. They have a nice conversation before he rushes off. Once Violet is feeling better, the doctor tells her that Isobel has watched her around the clock and nursed her back to health.

Edith talks to Cora about going to London to find Grayson. Cora reassures her about Grayson and about her insecurities. Rose then asks Cora if she can join Edith on her trip to London. Cora is hesitant at first, but finally relents as Rose assures her she will be a support to Edith and is simply going to see old friends…failing to mention her new bandleader boyfriend. Edith and Lady Rosamund arrive and they are skeptical about the place and very worried about what Edith is preparing to have done. She makes the painful decision to leave after hearing the cries of another woman.

Carson and Mrs. Hughes plot to keep Alfred away when he sends word he is on his way. They come up with a story about flu going around down below as an excuse to have him stay at a hotel. They don’t want his presence to rock the boat with the ladies now that everything is running smoothly. Alfred later takes it upon himself to just show up. Mrs. Hughes tries to cover when he talks about the terrible flu going around and the girls have no idea what he is talking about.

Rose takes off to meet Jack as soon as she arrives in London. They take a boat ride and she tells him how she has been feeling. Edith finally opens up to her aunt about the pregnancy and wanting to terminate it. Edith listens to her pleas not to have an abortion because of how dangerous it is and the fact it is illegal.

Cora tells Mary that Gillingham is planning to come for the night. His arrival is welcomed by Mary, but Anna is shocked and in fear upon seeing Mr. Green speaking to the staff. Baxter clearly picks up on their uneasiness and seems to take a mental note. Mrs. Hughes confronts Green when they are alone and tells him she knows exactly what he did to Anna. Green tells Mrs. Hughes that he and Anna were drunk and that the whole thing was consensual. Both Bates and Baxter seem to pick up on the tension Anna is feeling when in the room with Green.

Next week promises another week of uncovered surprises. Stay tuned and be sure to check back with CDL for all the details!