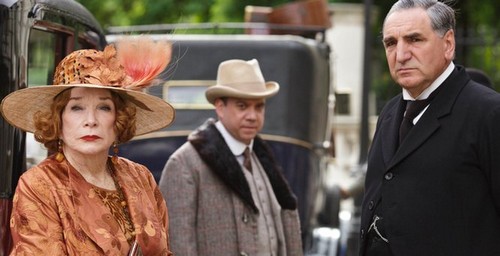 Tonight on PBS a new episode of their popular drama DOWNTON ABBEY.  On tonight’s episode the Season 4 finale of “Downton Abbey” finds the Crawleys in London, where Rose’s coming out ball is to be staged at the stately Grantham House. Did you watch last week’s episode?  We did and we recapped it right here for you.

On last week’s episode Rosamund hatched a plan to help Edith out of her predicament, but will Violet see straight through it? Isobel is on the receiving end of some unexpected attention, while Mary asks Gillingham for a favour. Rose had her nose put out of joint when plans didn’t go her way, and Alfred realised too late that he might have made a mistake. Just when Bates and Anna seemed to be coming through the worst of their troubles, some unexpected news gave her fresh cause for concern.

On tonight season finale it’s the summer season and as part of Rose’s ‘coming out’ she is to be presented at Buckingham Palace. The family and servants are at Grantham House, their London residence, preparing for the busy social program. Not one to miss such a grand occasion, Cora’s mother, Martha Levinson makes the journey from New York with her playboy son Harold, fresh from his recent brush with the law. Both outspoken and larger-than-life, they make quite an impression amongst certain members of London’s high society, in particular with Lord Aysgarth, played by James Fox.

Tonight’s Downton Abbey season 4 finale is going to be great, and you won’t want to miss it. So be sure to tune in for our coverage of Downton Abbey — tonight at 9 PM EST!  While you wait for our recap, hit the comments and let us know how excited you are about the new season of the Downton Abbey?

It is the season finale for the show, and tonight’s episode brings the Crawleys and staff to London. Viewers are to see tonight as about eight months later. While little has changed on some topics (Mary is still being pursued by Mr. Blake and Lord Gillingham) other things have changed, and Cora’s mother and brother are there to experience all the excitement.

Daisy passes a message along to Baxter that he is looking forward to the stories she has for him. Molesley overhears this.

Cora’s mother visits with Harold, who just had some recent problems causing Robert to travel to America. Rose is being presented within days and the Crawleys are at Grantham House in London, as is the staff. Ethan, newly introduced on the show, has traveled with the Levinsons to London. He has taken a liking to Daisy and is actively pursuing her. He is asked to be a footman for the night as the staff scrambles for the special evening ahead. Daisy takes the lead in the kitchen and is appreciated for her knowledge and hard work.

That evening, Samson arrives with Rosamund and he immediately begins plotting another scam. Later, as everyone is dancing, Rose runs off and Samson takes her bag and begins looking inside. Edith has given birth and given up her baby, but it now having second thoughts. She shares her feelings with Rosamund. Alfred writes that he has been hired by the Ritz and is coming for a visit. Isobel and Violet travel together to London for Rose’s presentation.

Anna gives Mrs. Hughes items for donation and walks off. Mrs. Hughes finds something in the pocket and tries to stop Anna. Of course Baxter is right there snooping but it seems only Mrs. Hughes sees the item from the pocket that is obviously disturbing. She later shares it with Mary…It is a ticket that confirms Bates was in London the day Green died. Mrs. Hughes tells Mary she will pretend to have never seen it. She cannot condemn Bates if by chance he did defend Anna’s honor and avenge her attacker. She reminds Mary that Bates could have been in a different area of London and had no involvement in Green’s death.

A secretive letter from the Prince to Freda Dudley Ward that she shared with Rose turns up missing. Rose suspects Samson. Rose approaches Robert and they plot a way to get it back, knowing the letter was taken by Samson so he could sell it. Robert seeks Bates’ help to find someone to forge a signature to gain access to Samson’s place where they believe the letter will be.

Edith receives word that Gregson had run into trouble and some witnesses that he was being harassed during altercation with Germans in brown shirts. Playboy Harold continues to offend after a night full of mistakes, this time while on a picnic with Madeline. Mary and Mrs. Hughes both hint with Bates about his London trip to possibly find out more information. They both become more suspicious but are unclear about what to do. Mrs. Hughes still feels strongly about not doing anything with what they know.

Tom finally asks Ms. Bunting out on a date. His servant spills the beans to Robert about having seen them alone and raises suspicions with Robert. Robert asks Tom about it during a card game. He has seen her quite a few times recently after not seeing any of each other for a while. Thomas tells Baxter that she’s making a mistake getting close to Molesley since he has a lot more valuable information.

Blake puts in a lot of work on trying to convince Mary of a happy future with him. Cora and Rose get in to Samson’s place but are unable to find the note they were looking for. Bates saves the day when he finds the note in Samson’s breast pocket of his jacket and promptly grabs it and later gives it to Robert. Samson finds, shortly after, that the note is missing. Mary is so grateful for what Bates did and she appreciates the loyalty of he and Anna so much, she burns the ticket from Bates’ old jacket in the fire.

Rose enjoys a dance with the Prince as he opens the ball with a surprise visit. Molesley assures Baxter that she should not fall into any scheme that Thomas is trying to involve her in. Lord Gillingham gets Mary alone. After a deep conversation, Tony shares that Charles Blake is not who she thinks he is and he is going to be very wealthy because he is an heir.

Mary confronts Charles about his future wealth. Now they have a fair fight for Mary…and Charles and Tony will both battle to win her love. Edith talks Drewe into taking her baby once she gets her back. She makes up a story for him to share with his wife and others. She offers to pay him whatever he wants as long as he is willing to keep this secret from her family. He agrees to keep the secret between just the two of them.

The staff has a nice day trip to the beach and a good time is had by all. The scene (and season) end with some fun banter between Mrs. Hughes and Mr. Carson as they walk, hand-in-hand, into the ocean.

Happily, there will be a season 5 of the hit show, which will include 8 more episodes.