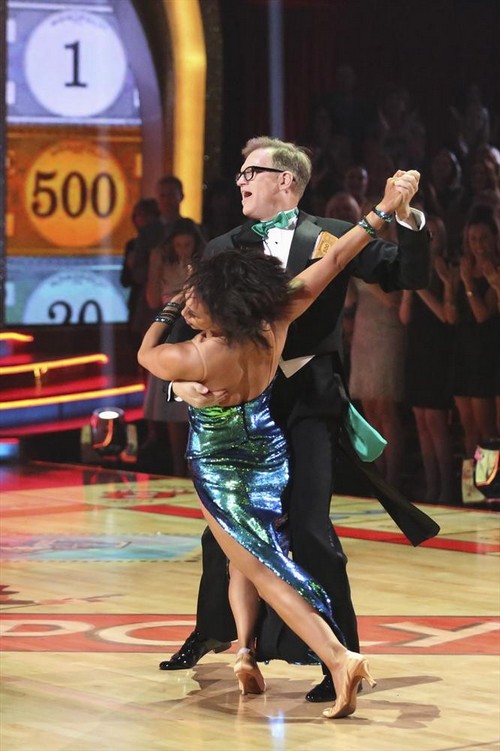 Stand-up comic, actor and producer Drew Carey danced a Jive, on tonight’s season 18 episode 2 of Dancing with the Stars. The show kicks off with a show-stopping opening number choreographed by Mandy Moore featuring the entire cast followed by an announcement that is not to be missed!   We posted a nifty bio of Drew so you can get more familiar with him. If you missed tonight’s show you can read a full and detailed recap, right here.

On last episode Drew performed a Foxtrot and Len loved it saying,   “That was very watchable, I enjoyed it from the first moment.”

Drew Carey and professional dancer Cheryl Burke: dancing a Foxtrot.  Drew has been getting ready for his dance tonight.  He tweeted, “At dress rehearsal for #DWTS. Everyone is KILLING it! See you at 8 pm!”

JUDGES COMMENTS: Len: “Well first Drew congratulations getting through to next week.  There was a lot of jive content.  It was so much fun to watch.  Well done!”  Bruno: “The consummate stage animal you get the crowd going.  You are so in tune what the crowd wants.  I am telling you that was a good jive, a few mistakes but good job.”  Carrie Ann:  “I would not have pegged you as a jive man.  I think you did excellent it could have been higher scored if not for a few mistakes.  You will be surprised at your scores.”