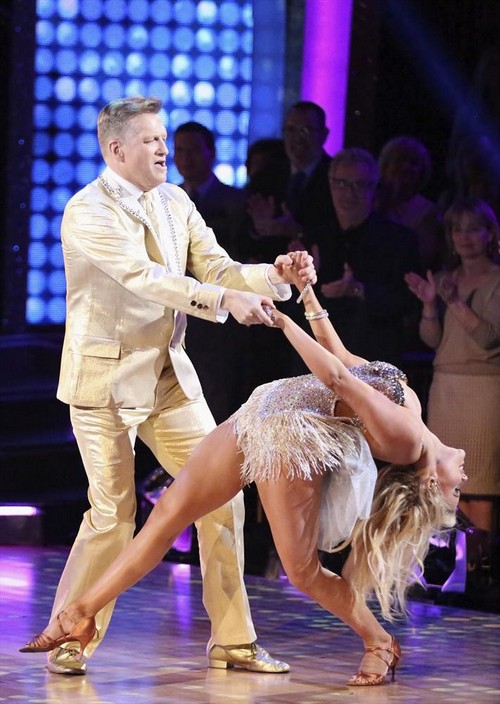 Stand-up comic, actor and producer Drew Carey danced a Quickstep, on tonight’s season 18 episode 5 of Dancing with the Stars with Cheryl Burke for the Disney themed evening.  We posted a nifty bio of Charlie White so you can get more familiar with him.  Season 9 Champion Donny Osmond guest judged alongside Len Goodman, Bruno Tonioli and Carrie Ann Inaba.  If you missed tonight’s show you can read a full and detailed recap, right here.

On last episode Drew performed a Cha Cha Cha and Len loved it saying, “They say that all that glitters is not gold.  I have not had that much fun in a minute and a half since a teenaged.”  Julianne: “Witney well done.  Drew you did great, I am a fan.”   They scored Drew 33/40.

Drew Carey and professional dancer Cheryl Burke: dancing a Quickstep.  Drew has been getting ready for his dance tonight.  He tweeted, “From 4 1/2 hours of quickstep practice today. Thing is @CherylBurke hates other people’s sweat. Oops. :)”

Judges comments: Len: “First of all let me just say I normally pick people out if they break hold.  But this is a special week this performance was zippity doo dah, but the technique was not.”  Donny: “It is too bad we start with the quickstep.  Tonight I am judging on performance.  I do want to pick out one technical thing and I got busted on it.  If you put an arm out it has to come from the core.”  Bruno:  “Aladdin, Aladdin you had too much to do the technique suffered but you deliver great performances.  You will be better next week.”  Carrie Ann:  “What I like is you always bring the fun and sometimes you make a strange face, don’t let us know your concentrating so much.”