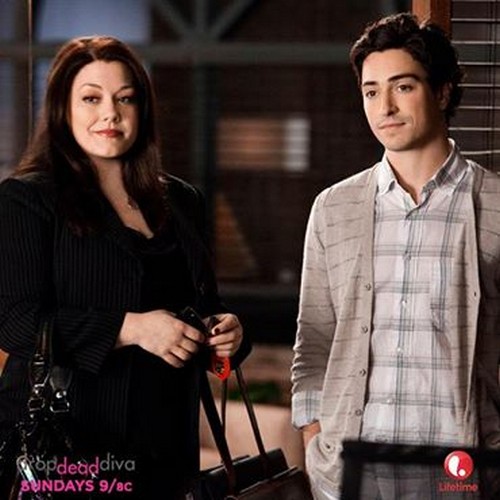 Tonight on Lifetime their critically-acclaimed hit series Drop Dead Diva continues with its tenth episode called, “No Return.” On this evening’s episode, Jane takes a case involving a drunk-driving accident; Stacy tries to get Owen to live a healthier lifestyle; Kim represents a ventriloquist whose puppet is banned from flying; a familiar face from Jane’s past reappears.

On the last episode, Grayson’s near death experience prompted him to make a serious gesture. Jane offered her services to a community drastically affected by pungent fumes wafting from a popular hot sauce factory. Kim was cornered into representing her mother in an unusual divorce proceeding against her own father.  Did you watch last week’s episode?  If you missed it we have a full and detailed recap, right here for you.

On tonight’s episode Jane takes on one of Grayson’s cases involving a drunk driving accident while Stacy tries to get Owen to start living a healthier lifestyle. Kim represents a professional ventriloquist whose frequent flier miles have been revoked after his puppet is banned from flying. A familiar face from Jane’s past makes an appearance.

Tonight’s season 6 episode 10 is going to be a great one, which you won’t want to miss. So be sure to tune in for our coverage of Lifetime’s Drop Dead Diva tonight at 9 PM EST! Remember also to bookmark Celeb Dirty Laundry and check back here for our live Drop Dead Diva recaps, reviews, news, and spoiler!

Tonight’s episode begins by starting off where we left off last when Grayson was shot. At first Grayson is in the hospital and seems to be recovering. He ends up flatlining after a complication from the bullet wound, and they cannot resuscitate him. Back at home, Stacy tries to give some kind words to Jane, but she chooses to go back to bed. Kim, obviously not as bothered by the murder of her colleague, tells Owen they need to begin the search for a replacement as soon as possible. Owen tells her to chill out a bit. They don’t need to start immediately.

Kim’s first client is a ventriloquist who feels he has been treated unfairly by being dropped as a frequent flyer from the airlines he usually uses to travel for his shows. He was racking up miles for himself and his “dummy” pal and they ended up dropping both dummies from the plan.

One of Grayson’s clients came in wanting to speak to him about her defamation case. Owen and Jane share the news that he’d been killed and while Owen tells her they will get a continuance from the courts, Jane shares that it is not necessary because she will represent her.

Stacy gets on Owen to take better care of himself. Meanwhile Grayson has arrived at the golden gates and doesn’t believe he is dead. We find out during the intake process that he was planning to propose to Jane.

Jane is in court representing Grayson’s client. Her brother died by the hands of a drunk driver who got off with no jail time. Feeling as though justice hadn’t been served, Jane’s client hacked the computer system of the company where the drunk driver was employed and wrote “murderer” next to his picture on the staff page for the company. He is now suing his victim’s sister for defamation. Jane mistakenly blurts out that her client hacked the company’s computer in trying to please the case to the judge.

Kim is in court defending the ventriloquist when they find out it was not that he violated the frequent flyer plan, it was an issue with him performing inappropriate comedy on the plane. Later, back in court, Kim calls several witnesses to testify that they were not bothered by the comedy act while flying, and didn’t feel his off-colored jokes were inappropriate. In fact, they enjoyed having him. The judge forces the airline to reinstate the miles for the dummy and Kim’s client. The airline’s attorney was ready to hand them the airline’s new policy which will require the dummy now travel with the luggage rather than having a seat on the plane.

Later, Jane goes through Grayson’s files looking for more information about the case. Her client has now been charged with criminal hacking as a result of her mistake in court earlier. She apologizes to Owen when he comes to check on her. He offers to take over the civil case and she relents, realizing that she was not ready to take on this case. She shares that she just wanted to get the victory for Grayson so he would be happy, but he is gone now anyway, she cries. Shortly after, Jane is presented with an offer for her client which would require her to serve one year in prison. Owen tells Jane she should try to talk her client into accepting the plea deal.

Back at home, Jane is looking through the items from Grayson’s office as Stacy continues to try to keep her friend’s spirits up. She finds a wedding announcement from a newspaper which eerily took place the same day that Jane’s client’s brother was killed. When Jane first saw the clipping at the office, she had thought she make have mixed it up with Grayson’s files as she wanted to get married at the same venue. Now, however, she feels it must be part of the case and what Grayson was researching.

Grayson is talking to Jane’s former guardian angel again and asks how he knows so much about Grayson’s friends. He plays it off that he is a great observer. Grayson asks him where the “return” button is that he heard about from Jane because he wants to use it to get back to her. He is told there is no way he can go back and he seems devastated.

Back at the office, Jane finds out the drunk driver, Tom, was at the wedding that she had the announcement for. He had lied and said he was out to dinner with his girlfriend. The police didn’t investigate because they were covering for him as the wedding hosted several police officers as guests. Owen tells Jane she needs a very credible witness if she plans to pursue this because it is going to upset a lot of people. Jane doesn’t mind and gets right on it by meeting with the manager at the venue. She likely has scared him enough into producing the employee/witness eh needs for her case.

Kim and her client are back in front of the judge. After the judge would not allow the new rule for carry-on to be imposed on Kim’s client, the airlines came back fighting and had proof that the comedian has broken more policies and then is flaunting that fact through social media. The judge agrees and Kim is frustrated with her client…who continues to bring his “dummy” act in front of the judge.

Grayson is told he is getting a second chance because Jane’s former guardian angel owes her and wants to do this for her and Grayson. When Grayson is confused, after being told he could not go back, he is reassured that he will receive help to get back to Jane. He is told this is a one-time deal last chance. He presses the return button.

Kim uncovers a list that shows the airline may have been prejudiced against her client. The list they uncovered shows that the airline used dirty tactics to get rid of frequent fliers that had many miles but never bought tickets anymore. She saves her client and his dummy.

Jane bring evidence forward showing that corruption took place based on the commissioner’s daughter’s wedding. The prosecutor failed to truly try the case because of the close ties to the police and what the investigation would have uncovered. Jane gets her client justice as she gets the case to be reexamined. Jane is present later when Tom is at dinner as police arrive to arrest him.

Later, in her office, Jane and her client have a nice talk. After her client leaves, Jane gets a call from a prison from an inmate. The caller identifies himself as Grayson. Jane is ready to hang up thinking it is some sick joke. Then he tells her that he “hit the return button,” and Jane knows…Grayson is back.

Imagine what this is going to mean for Jane!! Her former attorney boyfriend is in the body of a criminal!