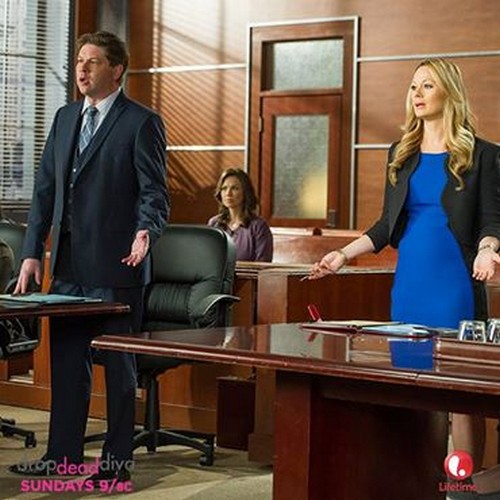 Tonight on Lifetime their critically-acclaimed hit series Drop Dead Diva continues with its ninth episode called, “Hope and Glory.” On this evening’s episode, Grayson’s near-death experience prompts him to make a serious gesture; Jane helps a community affected by pungent fumes coming from a hot-sauce factory; Kim is forced to represent her mother in an unusual divorce proceeding against her own father.

On last week’s episode Jane represented a transgendered elementary school student while Grayson took on a high profile case involving the murder of a college student. Stacy became increasingly uncomfortable as Owen showered her with gifts. Jane decided to come clean to Grayson about who she really is.  Did you watch last week’s episode?  If you missed it we have a full and detailed recap, right here for you.

On tonight’s episode Grayson’s near death experience prompts him to make a serious gesture. Jane offers her services to a community drastically affected by pungent fumes wafting from a popular hot sauce factory. Kim is cornered into representing her mother in an unusual divorce proceeding against her own father.

Tonight’s season 6 episode 9 is going to be a great one, which you won’t want to miss. So be sure to tune in for our coverage of Lifetime’s Drop Dead Diva Season 6 tonight at 9 PM EST! Remember also to bookmark Celeb Dirty Laundry and check back here for our live Drop Dead Diva recaps, reviews, news, and spoiler!

Tonight’s episode picks up right after Grayson was shot. The last anyone saw of Grayson – he was unconscious due to several gunshot wounds. And when the show opens, his friends are all waiting for news at the hospital. They were in there for quite a while and so it wasn’t surprisingly when Kim got a call from the outside world faster than hearing from the doctor.

Jane gave her permission to go. It wasn’t like any old case that needed Kim’s attention. It was Kim’s loving albeit crook of a father that needed her.

Kin’s father was arrested for public indecency. He and his new wife were celebrating their wedding night in the hotel’s pool and after they kept ignoring the hotel staff – police were called. So not only did Kim have to rescue her father from prison, but she also had to meet her stepmother under these unusual circumstances.

She got them off lightly with the judge. However, as part of the agreement to getting off with no prison time; her father was supposed to have stayed out of trouble. This proved to be too hard once his ex-wife and Kim’s mother decided to reappear in the picture. The former Mrs. Kaswell heard about the marriage from Facebook and there was even a picture included. Sadly, adding the picture is what started the problem.

Kim’s mom saw her honeymoon ring on the hand of her ex’s new and young wife. As per their divorce agreement, the ring belongs to her and she should have had it long ago. But her ex claimed he had lost the ring and so Kim’s mom wants to use her lawyer daughter to get it back.

In the meantime, Grayson awoke from surgery in good condition. The doctor had to leave behind a bullet fragment because of its position though it doesn’t seem to be troubling Grayson. It’s like he’s back to his old self. Jane wanted to stick around the hospital to take care of him and he told her to take on a new case.

Jane’s new client is a mother with a very sick daughter. The daughter and several people from their town have been getting sick due to a hot sauce factory. The pepper fumes have become too much for them and these good everyday people needed Jane to help them fight the factory.

Sick little girl against big company – Grayson knew that was right up Jane’s alley. And getting rid of her was kind of necessary seeing as he’s planning on proposing. He was going to take her to the ocean for a romantic getaway, but after what he’s been through – he didn’t want to waste any more precious time. So he called in Stacey and enlisted her help in proposing to Jane from his bedside.

Jane showed up again at the hospital right when Grayson was feeling frisky. Although they never did get the chance to enjoy it. Jane was called back to the office and you’ll never guess why. She’s being sued.

She had shut down the factory claiming the pepper fumes to be a public nuisance. And they are, but there was more to her clients’ complaints than she knew about. Due to private testing, Jane realized that her clients were ill because their immune system had already been weakened by a different toxic fume. That was also why they were so susceptible to the pepper cloud. So it wasn’t the hot sauce factory’s fault. At least not all of it. Now in order to save the factory and more importantly the factory workers’ jobs – Jane has to prove that another factory was the instigator in all of this.

As for Kim, her parents took their complaint to court. They were continuing to argue over the ring when it was revealed that they never got officially divorced. So what did the judge do? He put both of them in prison for bigamy. Later Kim managed to get a deal from the judge and all her parents have to do is sign their divorce papers.

But Kim’s mom didn’t want to do that. She preferred to fight for back spousal support. And the truth is – Kim’s mom lost her right to the ring. She told her ex that he could keep it in an email a few years ago. So Kim realized that her mother was dragging this all out for nothing.

Her mother was upset and that’s how she chose to react better yet retaliate. Mom was hurt that Kim chose her dad to move in with her to help with the baby and not her. She felt like she was being pushed out and Kim comforted her mom with the fact that her son was only ever going to have one grandma.

Still, there was a condition to Kim’s mom having more involvement with Noah. She had to agree to get along with grandpa. So for now all they can do is try to be peaceful for the baby’s sake.

Jane had to make a second trip to court once she realized Toxic Control wasn’t going to clean up the oil spill. She couldn’t understand why a government agency was refusing to help people in need. The answer came when Paul looked into the head guy at the facility. It seems he didn’t want anyone to get wind of the bribes he took in the late 80s. That’s when the factory that’s actually making people sick was in action.

So everything that happened afterwards was his fault due to inaction and once the DA got involved; the judge agreed to clean up the toxic waste and to re-open the hot sauce factory.

It was win-win day for Jane. And on top of that she caught sight of her engagement ring in Grayson’s drawer while he was sleeping. She figured he was waiting to get released from the hospital to do it and on the day of – she was so excited. But Jane and Grayson didn’t get engaged. Instead of the happiest day of her life; she got the worst.

Grayson died from his injuries without ever getting the chance to propose.