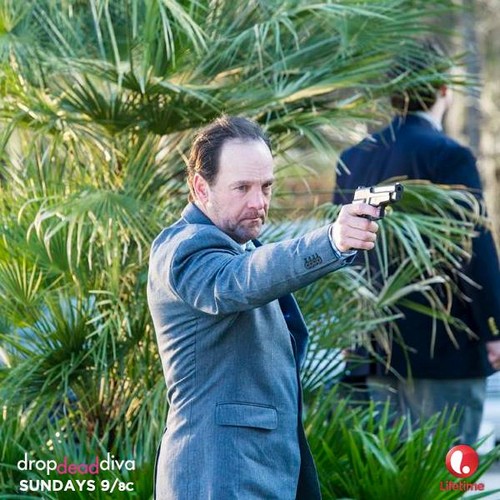 On last week’s episode after Jane and Grayson spent the night together, she let the “L” word slip and immediately wished she could take it back. Owen defended the mayor of Malibu when she was reprimanded for donating.  Did you watch last week’s episode?  If you missed it we have a full and detailed recap, right here for you.

On tonight’s episode Jane represents a transgendered elementary school student while Grayson takes on a high profile case involving the murder of a college student. Stacy becomes increasingly uncomfortable as Owen showers her with gifts. Jane decides to come clean to Grayson about who she really is.

Tonight’s season 6 episode 8 is going to be a great one, which you won’t want to miss. So be sure to tune in for our coverage of Lifetime’s Drop Dead Diva Season 6 tonight at 9 PM EST! Remember also to bookmark Celeb Dirty Laundry and check back here for our live Drop Dead Diva recaps, reviews, news, and spoiler!

Jane represents a transgender student; Grayson takes on a case involving the murder of a college student; Stacy grows uncomfortable when Owen showers her with gifts; Jane decides to reveal who she really is to Grayson.

Tonight’s episode begins with Grayson coming out of the bedroom with Jane surprised that he is dressed and ready to go. Since it is 11PM. Grayson tells her he needs to leave because he needs to meet with a client downtown who is being questioned in a murder case as Owen left him four voicemails. Jane is excited and she shares her excitement because she sees that it seems like Grayson may have a better chance of making partner now as he is getting the criminal experience Owen wanted him to have. He didn’t realize this, but Jane spilled the beans. Paul later talks with Jane and she shares she plans to tell Grayson about who he really is. He tells her it is a bad idea, but she doesn’t agree and walks on.

Stacy and Owen seem to be getting along very well and are noticing how the man at the table next to them has been there the last four mornings, each time with a different woman. Owne likes that they are getting a routine.

Owen is really upset with Grayson because he got to the precinct too late. He tells him it is his responsibility to answer his phone. The next morning, Jane is met by clients who have a transgender child who is being forced to use the girls’ restroom as their child was born a girl. They have been raising their child now for years as a son and they do not want their son forced to use the girls restroom. Too bad Sam is in a private school where they are not bound by the same laws as public schools in California which allow students to use restrooms based on gender identity. Jane goes to the school to try to reason with a representative from the school who claims he is worried about safety issues. When he fails to reason with her clients, Jane tells him she’ll see him in court. Kim pulls some important information that will help Jane in her case. Jane asks Kim to be her assistant and she happily accepts.

Grayson is in court with his client. Grayson finds out while in court, that his client confessed to the crime on video and the prosecutor has the video! Later, Grayson talks to his client and finds out that he was set up to confess by the police. The client is really scared because he swears he did not try to kill her. He shares with Grayson that he step dad was a horrible guy who was trying to worm his way back into her life. In court, Jane shows documentation to prove that the private school accepted public funds, but she was incorrect as far as how the funds were used and she makes no progress. As she walks out of court, she talks to Grayson and Paul interrupts them as soon as he sees them together because he is worried Jane is telling Grayson about their secret. She tells Paul he needs to deal with the fact that she is moving on.

Jane is back in court and this time she focuses on uniforms and the school’s policy. She wins him the right to use the boy’s restroom, but later her client returns to tell her that Sam was expelled and the principal was fired. She vows to help Sam and help the principal who was wrongfully terminated. The school is claiming the family falsified the application because they listed Sam’s gender as male.

Grayson finds his client now is caught with a matching piece of rope with his client blaming the police for setting him up again. After Grayson shares how fishy everything sounds, his client turns ugly and goes off telling him he has to defend him and he better tell him what to say that will get him out of this. Grayson tells him he thinks he needs to go, as he is shaken from all this. Back at the office, Owen comes in and checks on Grayson, who is drinking. He tells him that the client is guilty and he doesn’t feel right defending him, but Owen reminds him of his job and how he is to do it. He leaves Grayson and tells him to stop drinking.

Jane is back in the courtroom with Kim and as Jane is still not making progress. Kim steps in when she hears the defense talking about Sam’s “disability” and pitches a plea for the judge to consider requiring the school to allow Sam to use the boy’s restroom based on the ADA accommodation requirements. Jane is furious that Kim did that without consulting with her and it hurts their case because the family doesn’t want the case going that direction. Sam puts a skirt on and tells her mom to take her to school as a girl so she can just get back to school.

Later, Stacy fills Jane in on all the updates about the baby and Owen. Jane gets a call in the middle of their girl talk. Her client is in the hospital. She had a bad experience at school while in the bathroom with the boys. Jane tells Sam they will go back to court and she wants Sam to tell the judge in his own words what happened.

She sees Grayson later and he shares that he found out the police violated the civil rights of his client and lied to him. He can prove this and win the case. Grayson is conflicted because he doesn’t feel right about seeing this client free when he knows he did it. Jane recommends he tell Owen. Meanwhile, Paul is finally ready to say goodbye to Jane. Stacy comes to see Owen and tells him that she no longer wants all the gifts because she is an independent woman and is not his wife. Owen gets down on one knee and proposes. Since she says yes…maybe we will see a wedding in the series finale.

Grayson takes more heat from Owen who tells him he will testify and then he will come back to meet with him to discuss his future at the firm.

Jane does not win Sam the chance to use the boy’s restroom. The principal who was fired meets with Sam to tell her she got a job at another great school and offers him the chance to attend with a full scholarship. He happily accepts.

Outside the courtroom, Owen takes over the case from Grayson but Grayson’s testimony allows their client to walk free. Grayson is not happy and as they leave the courthouse, someone who obviously wanted the killer behind bars shoots Grayson for getting him off. Everyone gets on the ground and Jane runs to Grayson.

Wow…they will really pack these last few episodes as this series comes to an end.