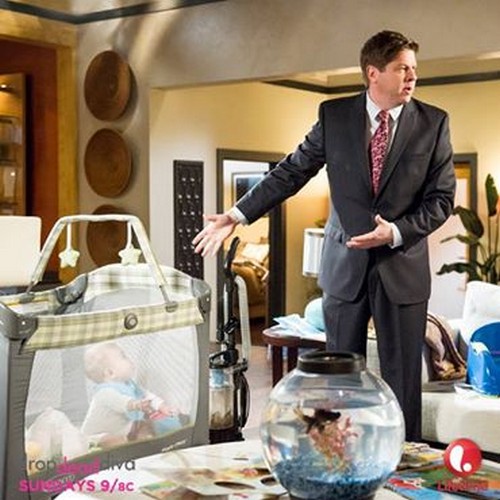 Tonight on Lifetime their critically-acclaimed hit series Drop Dead Diva continues with its seventh episode called, “Sister Act.” On this evening’s episode, Jane and Grayson spend the night together and she says something that she immediately wishes she could take back. Meanwhile, Owen defends Malibu’s mayor when she’s reprimanded for a charitable act; and Jane represents a teen who is in critical need of a bone-marrow match.

On last week’s episode Stacy got worried when someone suggested that her frequent burping was a sign that she was pregnant with an evil baby. Meanwhile, Grayson and Jane took a case involving national security; and Kim represented a family of orphans when their adoptive parents kicked them out following an appearance on a home makeover show.  Did you watch last week’s episode?  If you missed it we have a full and detailed recap, right here for you.

On tonight’s episode After Jane and Grayson spend the night together, she lets the “L” word slip and immediately wishes she could take it back. Owen defends the mayor of Malibu when she’s reprimanded for donating…

Tonight’s season 6 episode 7 is going to be a great one, which you won’t want to miss. So be sure to tune in for our coverage of Lifetime’s Drop Dead Diva Season 6 tonight at 9 PM EST! Remember also to bookmark Celeb Dirty Laundry and check back here for our live Drop Dead Diva recaps, reviews, news, and spoiler!

Jane and Grayson spend the night together, and she says something that she immediately wishes she could take back. Meanwhile, Owen defends Malibu’s mayor when she is reprimanded for a charitable act.

Tonight’s episode begins with Grayson getting dressed at Jane’s place after a night together. She is ready for the day and offers him breakfast. As he was walking out, she naturally says, “I love you,” without any thought at all. He turns and asks what she said and she plays it off and says it was nothing. She is kicking herself for saying those three words so quickly. She explained to Stacy at the office that she was reminded of life with Grayson from before she was Jane and she and Grayson lived together. She said it was just natural then. Stacy tries to downplay it a bit so Jane isn’t too worried.

Jane meets with a client whose daughter needs bone marrow and is seeking help against the nun who promised to be a donor but backed out at the last moment. Jane is very upset about the whole thing as she is told the nun was going to Hawaii and seemed to have no intention of helping the young girl as she promised. In court, the judge tells Jane she cannot compel someone to give their bone marrow. Jane asserts that she will sue for money if that is the only way to force the sister to make good on her promise. Jane gets her on the stand and questions how she can make such a choice. The nun is visibly upset and blurts out the reason for her pulling out is because she is pregnant and is renouncing her vows. She cries as she apologizes to the mom and young child. Later, Jane shares some good news with the girl and her mother. She wants to compel the fertility clinic to release the name of the girl’s biological father in hopes they can request the bone marrow from him. The judge cannot agree to that but agrees with Jane that the father can be called by another party and asked if he would like to help. The judge decides she will make the call. Jane is very pleased, as is the mom and daughter.

Meanwhile, Owen meets with his college friend Ellie, Malibu’s mayor, and she asks him to represent her to help her fight charges of misuse of city money. He agrees. After making an agreement that may help her career, she comes back later to Owen and says she’s changed her mind. When he tells her this will destroy her career she tells him she has nothing to lose as she is dying. He vows to help her. Later, at a council meeting, Owen counsels Ellie on how to handle the meeting by calling for a vote about her impeachment. Despite council members wanting to wait for another councilmember to arrive, Owen cited some municipal code for the city that requires them to start the meeting at a certain time and allows his friend to take a vote. After she wins the vote, she calls out that the meeting is adjourned. Owen gives her a wink. Later, the two share a drink over the success from the day. Ellie begins to flirt with Owen and talk about how he used to be after her. They had a good laugh, but then Ellie makes it clear she may like to pursue that option now and inquires about Owen’s love life. Owen shares that he thinks he’s found the one and just hopes she feels the same. He explains that it is a bit of a difficult situation. Just as they are talking, police arrive and arrest Ellie. Apparently, she locked a council member in her closet after asking him to come to her house. She wanted to keep him from voting her out. She goes with the police and Owen tells her not to say a thing. Later, he and Kim meet in the office about the case and realize a clerical error made Ellie believe she had cancer. An ulcer is the culprit of her stomach troubles. She is relieved to hear the news and a bit shocked….as I’m sure all viewers are about that part of the story line. She is facing serious jail time, however, for criminal kidnapping. She advises him of her stance that remains strong that she won’t give up her position and take the easy way out. She tells Owen as he is leaving that he should go after the lady he told her about. He smiles as it seems he has come to the same realization.

Kim approaches Jane in the office and shares that terry needs to be fired. Jane cannot believe it and asks why. Kim shares that since she went to jail, she can no longer work there, so if Jane doesn’t do the firing, she will. Jane visits Terry in jail and sees she’s getting along quite well, singing for the other inmates. Terry tells Jane how excited she is to get back to work. Jane assure s her all is well despite Terry wondering about the fate of her job.

In the courtroom, Jane finds out the father of the young girl declined the offer to help. Later she tells Stacy about the situations and Stacy offers some great advice, as well as a resource that may help her find half-siblings for the girl. They enter the identifying number for her father and they find she does have half siblings! Jane shares the news with the mom and daughter in her office and they are very excited. Shortly after they get the good news, the young girl tells her mom she is dizzy and faints. Jane calls 911. In the hospital, Jane talks with the family. Grayson comes to find Jane at the hospital to tell her of an important phone call from someone who plans to meet her at the office. The woman is a half-sibling to the girl. Jane meet with the girl and is very excited about the fact that the girl wants to help. Somehow Jane didn’t know her age and believed her to be 18 as the girl told her, when in fact, she was only 16. Her mom walks in, livid, and will not sign off on the girl helping her half-sister. Later, the girl comes back and asks Jane to represent her to be able to get the permission to be a donor via emancipation. She cannot take the case as it would be a conflict of interest, but she asks Grayson to represent her as she leaves to go get Terry out of jail, and fire her. As Jane arrives, Terry shares her excitement to get back to work. To buy herself some time, Jane tells her to take a day off as she plans to treat her to a day at the Four Seasons. Terry has no idea about being fired and is very happy about the hotel.

Kim gives Stacy some babysitting guidelines. The moment Kim leaves, the baby starts crying. She is going crazy as the baby continues to cry. Owen shows up to help and makes her feel much better. Later he heads back to the conference room and meets with the councilmember who was locked in a closet by Ellie. Owen tries to work a deal for him to drop the charges against Ellie which can benefit the councilmember. He agrees.

In the courtroom, Grayson tries to get the girl the emancipation she wants. When it is determined she is not working and cannot earn an income the idea of emancipation is questioned. Jane shares her client will pay for her cost of living expenses and the opposing council claims that the mom is paying the girl for her bone marrow, then, which is illegal. The two attorneys then go head to head and the judge steps in and denies the request for emancipation. Later, Jane is interrupted by the half-sister’s mother who is livid that her daughter is not in school, thinking Jane has something to do with it. They rush to the hospital and find her daughter there with the her half-sister. They beg her mother to allow her to stay just to be together. Her mother, after seeing them together, agrees to let her daughter donate the bone marrow her sister needs. They begin to cry with happiness.

Jane comes to the office and finds Terry there. She asks her why she is not at the hotel. Terry goes on to share that she is not actually staying because she plans to leave after one month to pursue her passion of playing music after getting interest from the prison shystem. Jane goes back to work a deal with Kim that helps Terry.

Owen meets with Stacy later. Owen talks about how life is short and the fact that he respects her wishes, but he confesses his feelings for her and tells her he wants a future with her. She stops him and tells him she is ready to be with him and kisses him.

Grayson stops by Jane’s office, and they talk about the happiness in saving a young girl’s life. He tells her he needs to head home but before he leaves he says…”One more thing…I love you too.” Jane is relieved and happy and they walk out arm in arm.

We’ll meet you here next with another recap of your favorite attorneys in action!