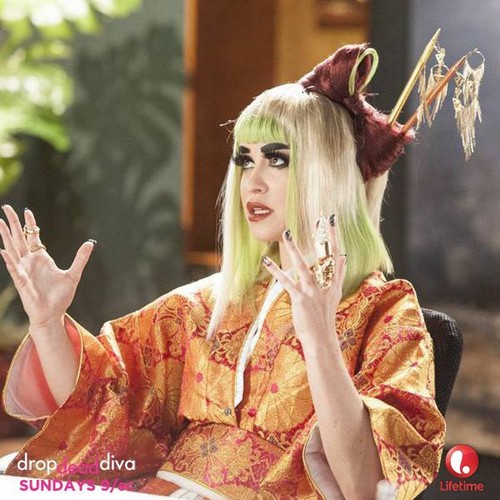 Tonight on Lifetime their critically-acclaimed hit series Drop Dead Diva continues with its eleventh episode called, “Afterlife.” On this evening’s episode, Jane takes the case of a man on death row; after she becomes convinced he is innocent. Meanwhile, Kim represents a small dance company that helps inner-city kids when their routines are stolen by an international pop star; and Owen experiences wedding anxiety.

On the last episode, Jane took on one of Grayson’s cases involving a drunk driving accident while Stacy tried to get Owen to start living a healthier lifestyle. Kim represented a professional ventriloquist whose frequent flier miles had been revoked after his puppet was banned from flying. A familiar face from Jane’s past made an appearance.  Did you watch last week’s episode?  If you missed it we have a full and detailed recap, right here for you.

On tonight’s episode after a shocking discovery, Jane reopens the case of a man on death row in order to prove his innocence. Kim represents a small dance company that helps inner city kids after their routines are stolen by an international pop star. Owen has wedding anxiety.

Tonight’s season 6 episode 11 is going to be a great one, which you won’t want to miss. So be sure to tune in for our coverage of Lifetime’s Drop Dead Diva tonight at 9 PM EST! Remember also to bookmark Celeb Dirty Laundry and check back here for our live Drop Dead Diva recaps, reviews, news, and spoiler!

Tonight’s episode begins with Jane at the prison, demanding to see her new client who she now knows is Grayson. Once she gets to talk with him, he tells her how the inmate he has taken the body of was executed the night before, but he came back to life. He tells her about hitting the “return” button and what he saw. He says this is his last chance. Jane vows to help her boyfriend, who is now in the body of a death row inmate.

Meanwhile, Stacy doesn’t give up too much information when Owen asks about Jane’s whereabouts. He wonders why, however, that Jane has a new client he doesn’t know about. Stacy glosses over that and continues with her wedding talk which is met by profuse sweating and a lot of anxiety from Owen. He tells her he has to run and is out of there!

At the office, Kim meets with a new client. She is the head of a dance company that helps inner city kids. The woman explains that the survival of the organization is dependent on grants. She shares that she created choreography for her dance team that was stolen by pop star Empress Katia. It was bad enough that she stole every move of her choreography, but even worse, now she is being accused of stealing dance moves from Empress Katia, and her reputation, and grants, are at risk. Kim agrees to take the case and get a meeting with the pop star.

Jane brings loads of files to the prison for her and “Ian” to go through. Grayson is having a hard time adjusting to life as Ian, but Jane tells him to remain focused and be happy that he has a second chance. They need to focus their efforts on finding something in all the legal docs that could save him. Jane shares a little information about “Ian” with Grayson, and he now knows he was accused of murder but has maintained his innocence from the beginning. The two receive bad news as they talk. The execution has been rescheduled for midnight. Jane heads back to the office and Owen begins to help Jane. In court, they get Ian another day through a technical loophole, one that “Ian” reminds Owen about just in time.

While in court, Empress Katia shows proof that she registered the moves from her video months prior to seeing Nadine’s show. Kim is surprised to hear that but Nadine shares that she actually came up with the dance months before the show that Empress Katia attended. Empress Katia has shared that she only went to see the dance team for charitable reasons and for her love of art, but is sticking to her story that the moves were hers to begin with. They now want to countersue Nadine for copyright infringement. Another hearing is scheduled to decipher all the facts in this tricky case.

Meanwhile, Ian meets with Jane and Owen. Ian swears he is innocent and Jane politely asks Owen to leave. She asks Grayson if he really believes Ian is innocent. He shares a note that Ian had left under his mattresses to be given to his mom after his death. In it, he swears he is innocent, and Grayson strongly believes he is not guilty. Later, Jane wakes up from a scary dream that the stay was lifted and they were dragging Grayson to his death. In her dream, he looked like Grayson too. She wakes up relieved to know it was a dream, and heads off to pour through more legal docs. They find some interesting news about the victim’s wife. They believe she may know something that could help Ian. Jane gives Grayson some tips about living life in a new body.

Kim and Nadine leave the courthouse and are welcomed by a group of angry Empress Katia’s “little soldiers” who are supporting their favorite artist and now know all about Nadine and Kim. Meanwhile, the victim’s wife comes by to see Ian and they get confirmation that Ian didn’t commit the murder. After she leaves, Jane and Grayson realize she is the prime suspect as they both believe she is the one who killed her husband. Kim sends Paul to act as a Little Soldier and he finds out that this is the third time Empress Katia has been accused of stealing dance moves.

After anxiety from wedding planning gets out of hand, Owen ends up in the hospital. When Stacy finds out his big stress is their wedding, and begins to get a little anxious herself. Jane encourages her to look into couples counseling. Stacy takes the advice and the two meet with a counselor and Stacy’s fears melt away when she finds out that Owen’s anxiety is not because he doesn’t want to marry her. In fact, he has fears she won’t show up on the wedding day. Later, she calms his fears and tells him she will be next to him every step of the way, offering to wear handcuffs on their wedding day to prove to him she’s not going anywhere. The two share a long kiss.

Jane and Owen meet with the manager of the country club but he doesn’t have news that will help Ian. In fact, the information they have actually seems to prove Ian was the killer. Back at the office, Jane shares that she still believes in Ian, but Own sternly tells her to give up because it is over, the execution will take place at midnight. Jane looks devastated.

Kim meets with another choreographer that had her moves stolen from Empress Katia and tries to find out how she is able to steal all this choreography. The woman doesn’t know but really wants to see Empress Katia pay for what she’s done. Back in court after finding out ties exist between Katia’s manager and an organization who bought tickets to the earlier show where Nadine showed her moves. Kim gets the judge to agree to get Katia to take her make-up and wig off, showing she could easily sneak into the show without being noticed. Kim kept pushing until she could get Katia to admit attendance at the show. All works out well, and Kim scores a victory for Nadine.

Grayson/Ian and Jane find out that the man they now believe committed the murder was about to be kicked out of the club and may have been willing to go to extremes by killing the club president in order to keep his financial woes private and keep his status at the club. Owen and Jane tell the Lieutenant Governor about what they’ve found and seek a stay for Ian until they can get a new trial. She takes Grayson home with her and she tells him all the details of how they won him his freedom. Moments later, the two end up in a passionate kiss, when Owen and Stacy walk out of Stacy’s bedroom. Owen’s mouth drops as he sees Jane kissing “Ian.”

Wow! This is heating up, CDLers! Meet you here next week when we recap this wild new storyline!