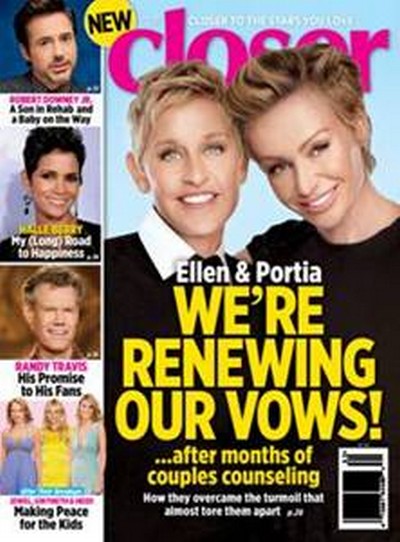 The latest Closer cover, which is scheduled to hit newsstands this week, claims “Ellen and Portia – We’re renewing our vows. After months of couples counseling, how they overcame the turmoil that almost tore them apart.” Are we buying it? No, not at all. It sounds like a member of Ellen or Portia’s publicity team offered Closer a fake exclusive to try and spin some of the nasty press the couple has been receiving lately.

Ironically, the nauseatingly happy Ellen and Portia cover on Closer Magazine came out the same week that stories broke claiming that Ellen smashed Portia’s phone because when she was high as a kite she recorded all of Ellen and Portia’s embarrassing blow-ups and fights. It sounds like someone at Ellen and Portia’s camp is trying desperately to clean up the couple’s image before it is irreparable.

This week’s Closer cover also features stories on Randy Travis, Halle Berry, and how Gwyneth, Jewel, and Heidi are making peace with their exes “for their children’s sake.” The Closer also features an in depth story regarding Robert Downey Jr. and his son Indio’s recent stint in rehab. Apparently Robert and his ex Deborah are “on the same page” when it comes to helping their son Indio get over his drug dependencies. And, they even sent him to Cliffside Manor, the same rehab that worked wonders for Robert Downey Jr.