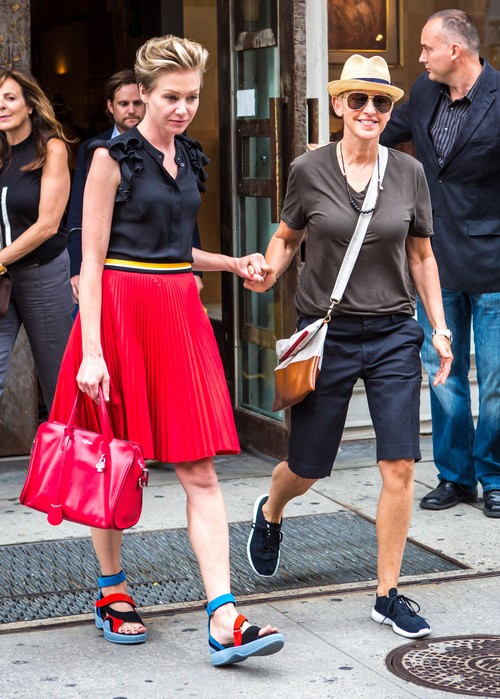 Ellen DeGeneres and Portia De Rossi have unfortunately been the recipients of some horrible divorce rumors, but it looks like those rumors may have had some basis in truth after all. Their marriage has been thrown in turmoil ever since Portia’s rehab visit a few months ago, and their silence on the subject has been particularly telling. If you recall, Ellen and Portia took the opportunity to slam the divorce rumors a few months ago, but this time, they’re staying quiet.

Recent reports suggested that it was an unhappy marriage and constant fighting that led to Portia’s initial rehab visit, which was further compounded by rumors of Portia’s extreme insecurity. Now, a new report from In Touch Weekly claims that Portia still believes that Ellen had an affair before she went to rehab. A source explains, “Portia thinks that Ellen had an affair with one of their mutual friends right before Portia’s rehab stint in May.”

The couple has reportedly decided to give therapy a try, with the source adding, “It’s going to take a lot for Portia to trust Ellen again. They kept up with the therapy after Portia got out of rehab, but they still have a long way to go.”

Even if Ellen didn’t actually cheat, there’s no denying that Portia’s self-esteem issues are playing a part here. Her career is lagging, and Ellen is getting all the attention – both of these combined are probably causing her to second-guess everything that Ellen is doing, and may have led to the jealousy and fighting that are now tearing their marriage apart.

Do you guys think Ellen and Portia will make it with the help of therapy? Or is divorce a foregone conclusion? Let us know your thoughts in the comments below.