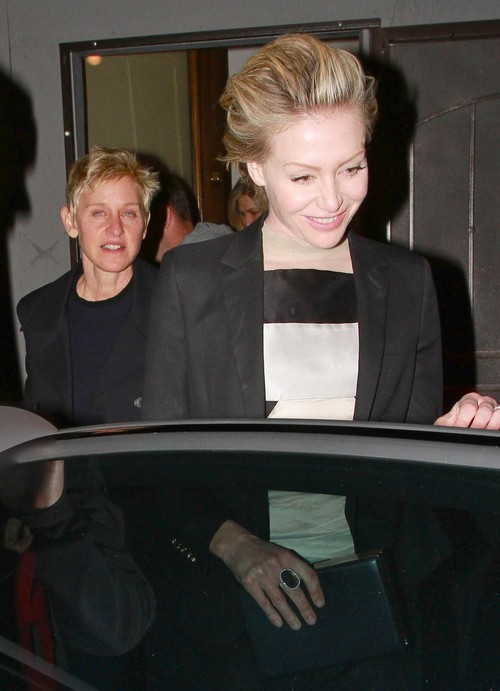 You know the old saying- where there’s smoke, there’s fire? Well we have been hearing rumors for months now about the dysfunction in Portia de Rossi and Ellen DeGeneres’ marriage and from the sounds of things it’s getting worse rather than better. These ladies seem to have quite a power struggle going on with Ellen demanding that she is basically the one calling the shots. In the past Portia has caved in and let her control things but lately she is wanting to take back her life.

According to the Feb. 17th print edition of Star magazine the couple had a huge blowout late last month because Portia refused to attend a taping of Ellen’s talk show. There was no real reason other than the fact that Portia wanted to get some stuff done for the couple. Reportedly Ellen freaked out and insisted that Portia was completely unsupportive. On this occasion not only did Portia not back down, but she took off her wedding ring. After Ellen left for the studio Portia was photographed out walking her dogs, ringless.

After 5 years of marriage Portia is starting to reassess her life and she’s quickly realizing that this controlling relationship may have an expiration date on it. Do you think that things are as tense between Portia and Ellen as we have been hearing or is it just the press looking for drama? We have heard that Ellen is really difficult to deal with outside of work. Do you think it’s true? Tell us your thoughts in the comments below!