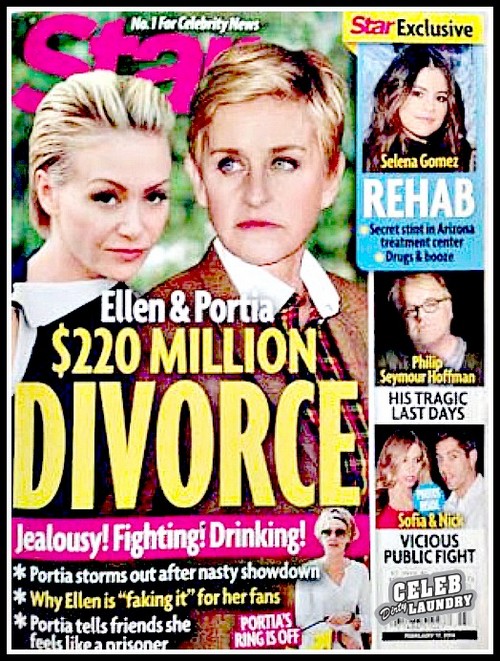 If the tabloids are to be believed, Ellen DeGeneres and Portia de Rossi have been going through some trouble lately. Now, according to the latest cover story from Star Magazine, that trouble has transformed into full-blown marital conflict, and the couple is on the verge of getting a $220 million divorce.

Aside from the fact that I doubt that figure is accurate, Ellen and Portia have shown no outward signs of anything wrong with their marriage. They’ve been spotted together in public recently, and neither one of them has discussed any issues in their marriage. Of course, that doesn’t necessarily mean anything – couples in Hollywood often have issues that they don’t publicize to the world, especially when you’re on the level of Ellen and Portia.

Anyway, Star alleges that the majority of the fighting was centered around jealousy from both parties, as well as drinking and alcohol issues. The report claims that Portia ‘stormed out’ of their house after a ‘nasty showdown‘, and that Ellen is reportedly ‘faking‘ the relationship and her happiness for fans. The report also claims that Portia’s already told her friends that she feels like a ‘prisoner‘ in her home and in her life. A source also adds that Ellen’s suffocating Portia, adding, “Ellen refuses to let Portia go out with her friends, and she regulates who is allowed in their house! She won’t even let Portia take most of the acting jobs she’s offered, because she wants to be the sole breadwinner, and she’s so jealous, she’s fearful that Portia might fall for another woman — or even a man — on the set!”

Can you imagine Ellen DeGeneres being this mean spirited and jealous, even out of supposed love? I can’t, and I don’t think she’s that good of an actress where she’s managed to fool the whole world into believing her act.

Portia was also spotted out and about recently without her ring on, which has obviously triggered the cacophony of rumors about their marriage. Granted, we know very little about the actual state of their marriage, but it doesn’t look very promising if she’s not wearing her ring. But even if they are having marriage issues, I doubt it’s because of Ellen’s so-called obsessive and rude behavior.

What do you guys think? Could Portia and Ellen be headed for a sure-to-be contentious and expensive divorce? Or are the tabloids once again reading too much into small things? Let us know your thoughts in the comments.