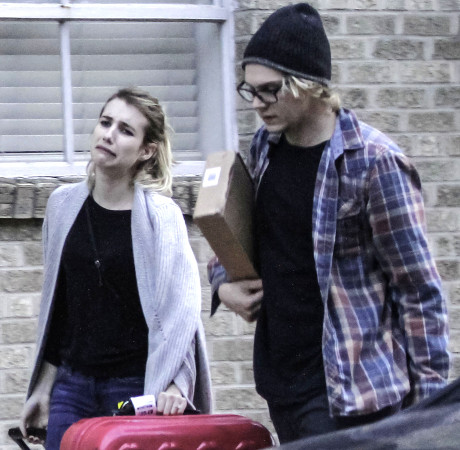 Emma Roberts and Evan Peters, who starred in American Horror Story: Coven together, recently announced their engagement. Many people are more than enthused, despite the couple’s rather aggressive history together, but one celeb thinks their impending marriage is everything but a good idea. According to the recent edition of Star, Kelly Osbourne, known for her commentaries on Fashion Police, believes that the couple is “too young” for this kind of commitment and is trying to do everything in her power to dissuade the two from marrying.

The magazine seems to be using Kelly’s recent called off engagement to Matthew Mosshart as the source for her alleged angst, bitterness, and vocal/opinionated behavior. Here’s the deal . . . . Why on earth would Kelly Osbourne give any cares regarding Emma’s engagement to Evan? As far as we know, Kelly and Emma aren’t exactly BFFs, so why the sudden intrusion into their lives? This story seems to be lacking some solid ground for us to properly sink our feet into.

Peters proposed to Emma over the holidays and we think they make a great lil’ couple. We wish them all the best as their wedding plans proceed. What about you? Do you think their marriage will be a successful one? Or do you believe their coming together will turn out like other celebrity marriages . . . a Hollywood horror story? Let us know your thoughts in the comments section below.