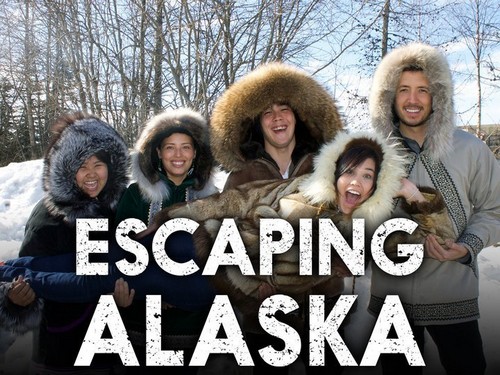 Tonight on TLC Escaping Alaska airs with a new episode. In tonight’s episode “Everything is Beachy & My First Eskimo Kiss”, the group lands in San Diego and quickly discovers that the Lower 48 is drastically different from Alaska.

On the last episode five young Eskimos prepared to secretly escape their native villages for the first time. They must lie to their loved ones and risk leaving their families stranded during the harsh winter in order to pursue their dreams of a new life in San Diego. Did you watch the last episode? If you missed it we have a full and detailed recap, right here for you.

On tonight’s episode the group lands in San Diego and quickly discovers that the Lower 48 is drastically different from Alaska. A trip to the grocery store reveals divisions within the group, and they face severe culture shock while celebrating Mardi Gras.

On tonight’s episode of Escaping Alaska, the gang finally made it out of Alaska and while they were excited on the plane ride heading south but their actual living conditions is like a cruel awakening. Simply put, they can’t afford anything better than a hostile and even there they have to share rooms. So it’s not like they have that much of choice on whether or not they can afford to dislike each other.

Although, the girls appear to have quickly bonded over the littlest things like no one having an appropriate outfit for the beach. In the end they had to risk unshaven legs and Mary was left wearing her tribal dress. Yet they still made sure to have fun. It was the first time any of them had been to a beach where the ocean wasn’t frozen over so they were pretty excited. Perhaps a little more than what Q was comfortable with seeing as he complained in his confessional that Nuala was overdoing it.

And his wet-blanket personality does not end there.

The group attempted to accustom themselves to San Diego and that included the weird smells and the comically cheap groceries. But that’s also where Q does his best to try and ruin the mood. Where now they can enjoy buying treats and typically junk food – he keeps telling the others what to buy and not to buy according to his tastes. And if they went by that then they’d barely have groceries.

Once they were done shopping – it came time for the cooking and again Q and Tamara voiced different opinions. She had one set idea on how to cook and when he ignored her she then wondered why a man felt it was his place in the kitchen. In her own words; she said what he should be doing is going out to hunt something.

He decided to cook the chicken his way and it turned out to be completely raw in the middle. However the one thing both Q and Tamara can agree on is that they each find Nuala annoying in their own way. Q thinks she’s an overall drama queen and Tamara starts to question sister solidarity when the much skinner Nuala complained about trying on bathing suits right in front of her. It made Tamara upset and the only person to take notice of her discomfort was Q. After seeing Nuala parade herself in several bathing suits, he started to make a joke of the whole thing to cheer up Tamara. And it worked!

[11:02:42 PM] Kristine Francis: Tamara though was feeling homesick afterwards so she called home. She didn’t know how much she was going to miss her family until she wasn’t surrounded by them anymore and yet she doesn’t want to go rushing back home either. The call in itself was a moment of weakness and luckily she didn’t let it slip to where she really was.

Tamara wasn’t the only one to call home. Mary just had to call her boyfriend when it suddenly dawned on her that a long distance relationship is going to be hard. He’s one of the few she trusted with the truth and she kind of needed his affirmation that going south wasn’t such a bad idea. Yet he could really only do so much.

Besides these lapses, the rest of them manage to adjust with a tad more ease. Frank and Nuala all enjoyed themselves exploring the area and Q enjoyed chatting up the locals – in particular the women. He had met a young vegetarian during their boat expedition and regardless of the way she disrespected Alaskan culture for its hunting traditions – he still got her to agree to a date.

But the date was so awkward. Q didn’t know what to say half the time though that never stopped him from saying something even if it’s silly like “do you know any rich people?”. Nor could he work up some courage at the last minute to give his date a goodnight kiss.

Later, everyone finds out about Mardi Gra and more importantly the parties that are happening right outside of their window so they deck themselves out and decided to join. Tamara is usually embarrassed about dancing so she took enjoyment in the fact that no one in San Diego knew her. And Q got over his nervousness around women just in time to kiss some random stranger in exchange for beads.

It was a hell of a night and it could have been celebrated by all if Mary hadn’t returned to her room early (she was homesick again) and if Frank hadn’t received a call from back home. The call was from his best friend and the friend wanted to remind him that he came down to San Diego to look for work – not to party.

Frank’s mom has been struggling while he’s away and he had to ask his friend if he could step in. His friend agreed but that doesn’t change how guilty Frank feels about leaving his family behind.