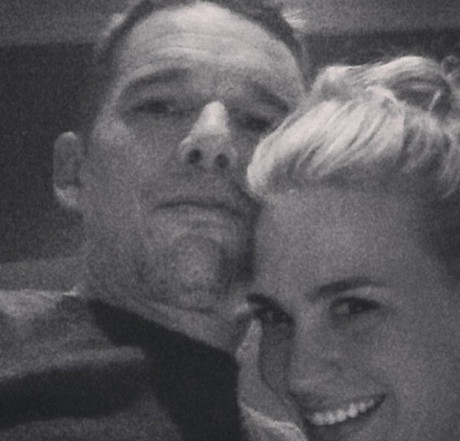 Once a cheater always a cheater, right? Well, it seems that Ryan Hawke is praying that this old adage isn’t true, as she’s about to do everything in her power to prevent her husband, Ethan Hawke, from straying. The actor is now working on a film with January Jones, who is well known for hooking up with some of Hollywood’s most married or attached actors. The two posted a photo on Instagram that looked a little too cozy and it made Ryan’s spidey sense’s tingle. Don’t forget that Ryan was once Ethan’s nanny while married to Uma Thurman and the two were rumored to have hooked up before that marriage officially ended.

According to the March 17th print edition of National Enquirer, Ethan and January will soon be filming on location in Albuquerque and Ryan was originally going to stay behind in NYC with the couples’ three children. Now she has done a 180 with her plans and is tagging along to New Mexico to make it a whole lot harder for Ethan to have serious alone time with January. I can’t say that I blame her. I mean, I wouldn’t want my guy working with January either. She’s a fling queen and obviously fears having a real relationship of her own and that’s why she seems to only angle for men who are ultimately unavailable to her for more than sex.

Even if Ryan tags along, Ethan and January will find a way to hookup if they want. Do you think that Ryan should trail her husband to New Mexico? Does he need a babysitter to keep his hands off of January? If so, what does that say about the state of Ryan and Ethan’s marriage? Tell us your thoughts in the comments below!