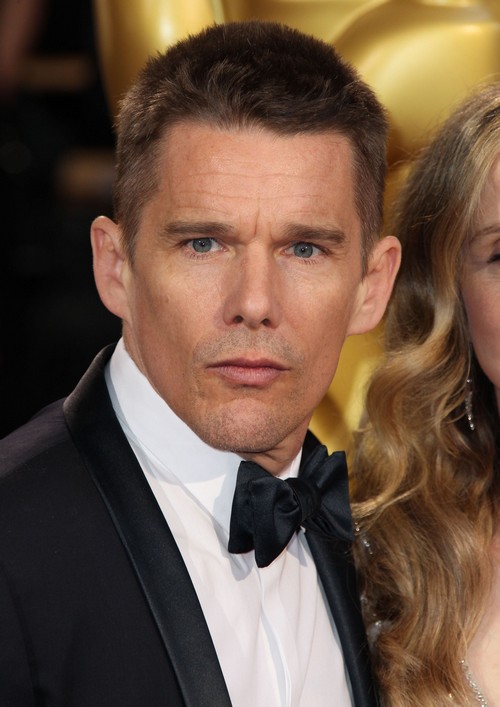 Is Ethan Hawke‘s wife worried about him cheating on her with January Jones? Has January Jones became the new Sienna Miller? The tabloids have started linking her to every married co-star that she ever works with, which is kind of sad but also, can you blame them? She’s become the Hollywood homewrecker that all the wives are afraid of, even if the image is extremely exaggerated.

According to a new report from the never-reliable National Enquirer, Ethan Hawke’s wife, Ryan Hawke, is starting to get worried at how close Ethan and January are getting, especially because January recently posted a picture on Instagram of them together, writing, “A dream come true working with the incomparable Ethan Hawke!”

Considering that Ethan and January will be shooting their movie Good Kill on location in New Mexico, it will give them plenty of opportunity to get close – but not if Ryan has her way, according to the source. The Enquirer’s report adds, “Ryan was going to stay in NYC with their children while Ethan was on location, but now she says she plans to join him on the set. Ryan figures if she is with him and brings their kids along, she can put out any fires between him and January before they start.”

You know, considering how Ryan and Ethan met, I don’t blame her for being worried. Ethan was married to Uma Thurman when rumors of Ethan hooking up with Ryan started to circulate – and then Ethan and Uma divorced, and Ethan got together with Ryan soon after that. Will that happen again with January Jones? When it comes to these celebrities, I’ve learned never to bet against the unexpected.