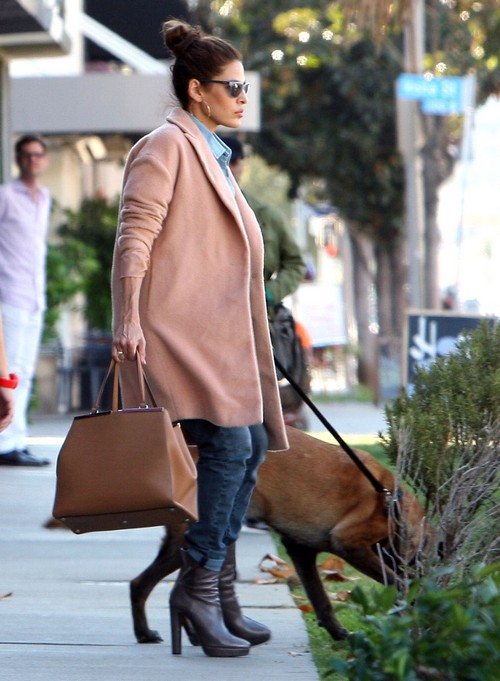 Eva Mendes may be pregnant, or she may not be pregnant. I think what’s important here is that she wants you to think she’s pregnant, whether she actually is or not. The rumors about Eva being pregnant have been circulating around for a while now, but they went into overdrive after Eva was spotted at LAX on Saturday. According to reports, Eva reportedly told the TSA agents that she would not be able to pass through the full-body scanner because she was pregnant.

See, she could have easily done that more discreetly no? Instead, she did in full view of eyewitnesses and other agents. I mean, she’s a celebrity – they’re used to scrutiny, and you’d think she’d be more private about this, right? I mean, isn’t Eva the one who constantly whined about her privacy being invaded and refused to address her relationship with Ryan Gosling in any interviews – despite the fact that she was probably best known around the world for that relationship? If she was so hell bent on privacy and keeping this rumored pregnancy secret, why be so careless and announce it with so many people around her?

Anyway, it’s possible that Eva’s also pretending to be pregnant, although I don’t think she would go that far. Considering that she and Ryan Gosling are rumored to be on a ‘break’ [a.k.a. on the verge of breaking up] since December, this might be a desperate attempt to win him back. Ryan does seem like the type of guy who’s always wanted to be a dad, and maybe he’ll come crawling back to Eva if he finds out he got her pregnant. Maybe she’s hoping that it will give them a chance to talk and work things out, if the rumors reach him. Or maybe she really is pregnant, and she just did an incredibly shoddy job of keeping it a secret.