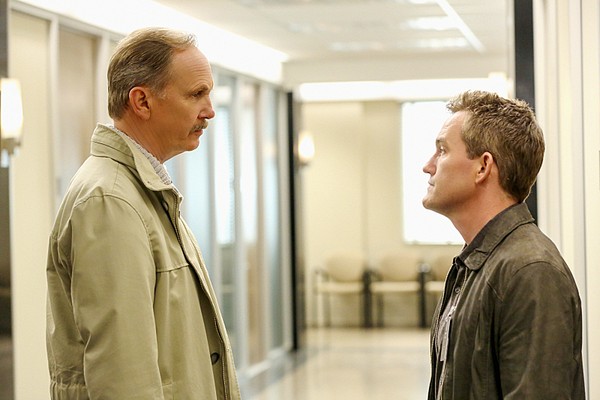 Tonight on CBS Extant returns with a new episode called, “Extinct” and on this new episode Molly uncovers details of her mysterious pregnancy, when Sam gives her an ultrasound. Also, Kryger tells Molly about his own disturbing solo mission that the International Space Exploration Agency is keeping secret.

On the last episode Astronaut Molly Woods tried to reconnect with her husband, John, and son, Ethan, after returning from a 13-month solo mission in outer space. Molly’s mystifying experiences in space lead to events that ultimately changed the course of human history. Did you watch the last episode?  If you missed it we have a full and detailed recap, right here for you.

On tonight’s episode after Molly collapses and experiences a vision of her encounter on the Seraphim, Sam agrees to give her an ultrasound so she can learn more about her mysterious pregnancy. Also, Molly tracks down Kryger and he reveals the disturbing details of his own solo mission that the International Space Exploration Agency (ISEA) is keeping secret

Molly sleeps alone. She wakes to a strange noise. It sounds like a heartbeat of sorts. She goes downstairs and sees it’s just sneakers in the drier. She’s relieved. John is there and asks if she’s okay and she says she’s still fuzzy. He hands her coffee and she says the awful coffee is the hardest thing about space. He laughs at her. She tells him to wake Ethan while she makes breakfast. She turns off the noisy drier. John says Ethan has a birthday party to go to and he got a video game for him to take. He tells her they’re going out to a fancy lunch to celebrate.

He says he has a schedule for her to bring Ethan to meet him and Yasumoto. She fixes his tie and says to look sharp when Ethan comes in and asks what the phrase means. At the space agency, Sam looks at some of Molly’s medical scans. Sparks approaches her and asks for Molly’s test results. She says tomorrow at the latest. He thanks her and heads off. Sam looks nervous.

At Yasumoto Tower, John comes into their new lab and Julie greets him. She’s thrilled with the new lab and came in at 5 to set up. The crew is all there and Julie takes him to his desk. He’s got an amazing window view and is stunned. Julie asks what he said to Yasumoto to turn it around. Femi Dodd is there and asks him the same thing.

Ethan plays a 3D building game and Molly asks when he got so good. He says he played a lot with Dad and Julie while she was gone. He asks her to play and she adds a piece and it tumbles to the ground. He tells her it takes patience. She says she has to go get ready for Andrew’s party and he says the likes the museum. She says it was her favorite place as a kid. He likes if space is her favorite place now but she says it’s at home with him.

John explains to Femi that Humanichs begin life in the lab and they allow the programmed brain to develop before it is put into a body. She’s skeptical and one of the lab techs laughingly tells her its the rise of the machines. Femi asks what happens to humans when we develop personal connections to the machines. John tells her that she should spend some time with his son to see. She says she’s not there to be convinced, she’s there to tell him that she’s not going to take it lying down that Yasumoto went around the board.

Molly hears the heartbeat sound again and heads back downstairs. It’s not the drier this time – it’s standing open. She gets a pain in her abdomen and hunches over. She looks up and sees Marcus standing there. He tells her it’s okay then repeats the phrase. Julie is monitoring Ethan’s brainwaves and notices them intensify. John thinks he and Molly are at the museum and he’s being stimulated. They’re not.

He’s downstairs looking at his mom who has passed out on the kitchen floor. A weird shape of concentric circles pushes up out of her abdomen and then fades back down into it. Ethan sees this. She comes to and tells him she’s okay and gives him a hug. Later, at the museum, Molly tells Ethan to catch up with the other kids. The elephant exhibit is really cool and animatronic.

The elephant comes out and stomps toward the kids trumpeting. All run away except for Ethan. He steps forward, curious until the pixelated elephant breaks up. Andrew’s mom asks about Ethan starting school and if it was hard to get him in. She says John was working with the school. Sam shows up and Molly thanks her for sneaking out to meet her.

She tells Sam about the pounding noise, passing out and a vision. She tells Sam she doesn’t know if she can trust Sparks. She says Harmon is alive and Sam doesn’t believe her. She tells Sam that Harmon faked his death because of them. She says there were abnormalities on his brain scans and says Molly has the same ones. She says whatever happened to Harmon is happening to her.

Molly wonders if this could be a hysterical pregnancy. She tells Sam she’s clearly infertile and says she needs an ultrasound to know for sure. Sam agrees but says she needs to find a facility where she can do it off the books. One of the parents comes and tells Molly they lost track of Ethan. She leaves Sam and goes to look for him. He’s in the evolution exhibit when a robot rolls up and tells him to step back because it’s not hands-on.

She asks if he wants to know about Neanderthals and he says yes so she gives him a mini lecture on extinction and survival of the fittest. She says Homo Sapiens were better able to survive and tells Ethan he is one. He says he’s not. The robot apologizes and asks what species he is. He introduces the robot to Molly and she pulls him away. She tells him he shouldn’t run off and that he worried her. He says Dad says the same thing and asks her not to tell him.

He asks if it’s a secret and she says sort of. He tells her that Dad says secrets are mean and she says they can be but you can also use them sometimes not to worry people. She tells him his Dad would be worried to hear that he ran off and that she fell down at the house. He asks if she’s okay and she says she is. They each agree to keep their secrets. They head off. Harmon is there and watches them from an upper gallery.

We see him in the Seraphim Station when he was on his shift. The robot voice, Ben, tells him there’s a solar flare and an energy surge. The lights flake and Ben stops responding. Harmon grabs a flashlight and goes into another bay. It’s the same one where Molly saw Marcus. He sees wet footprints on the floor and then sees a woman there. It’s his mother. He calls out to her and she steps closer to him.