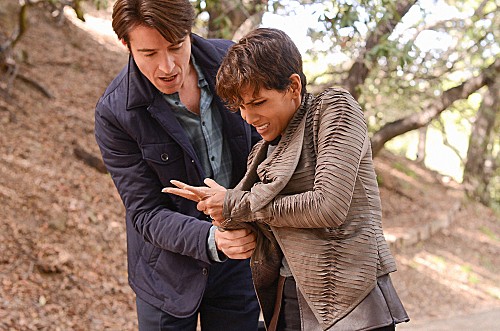 Tonight on CBS Extant returns with a new episode called, “Shelter” and on this new episode Sparks tries to quarantine Molly, but she and her family flee to a remote island with her estranged father. When the agency closes in on them, Ethan is exposed to grave danger. Meanwhile, Yasumoto experiments with a strange and deadly substance.

On the last episode Molly had to decide if she was going to reveal her pregnancy to John after he confronted her about her distant behavior. Meanwhile, John and Molly face parents who were suspicious of Ethan when he went to school for the first time. Did you watch the last episode? If you missed it we have a full and detailed recap, right here for you.

On tonight’s episode After Sparks attempts to quarantine Molly, she and her family seek refuge on a remote island with her estranged father. When the agency closes in on their whereabouts, Ethan is exposed to grave danger. Meanwhile, Yasumoto experiments with a strange and deadly substance.

Tonight’s episode of Extant begins with Molly and John driving with Ethan in the back seat of the car, they’re on the run. Sparks calls Yasumoto and informs him that Molly is on the run, and she escaped when he was trying to bring her in for quarantine.

Yasumoto arrives as a lab where they are trying to duplicate meteor substance. They have made it safe for skin to come in contact with the meteor substance, however it is not safe to be breathed in to the respiratory system. Yasumoto tells the lab technician behind the glass to take off his oxygen mask anyways, within thirty seconds he starts bleeding out of his eyes and drops dead.

Molly and John arrive at her Dad’s house with Ethan, he is thrilled to see them. John informs him that they will only be staying with him for a day.

Meanwhile, Sam is being held in an interrogation room. She asks the guard when she can leave and he says not until after she speaks to Sparks. She goes to the bathroom and tries to dump the sample of Molly’s blood in the toilet. Sparks and the guard barge in and catch her. Sparks calls Yasumoto and informs him about the blood sample, he knows Molly is trying to determine the paternity of the baby. Yasumoto tells Sparks to “take care of” Sam Barton.

Molly’s Dad’s dog freaks out when he sees her and barks at her and bites her hand. Her Dad has no idea what came over the dog, he never acts like that. While her Dad is bandaging up her hand he reassures her that he hasn’t had a drink in years and he is clean and sober. Molly takes Ethan upstairs to her old bedroom and tells him that it is his room now. Meanwhile, Sparks receives news that Molly and John ran to the island where her Dad lives.

Later Molly asks her Dad to take Ethan in to town by himself and have dinner with him. She says that she and John need to have some alone time because it has been crazy since her reentry. Her Dad agrees and doesn’t think anything is out of the norm.

Sparks is questioning Sam Barton, he looks through her cell phone and learns that she tipped her off and told her to “get out of the car.” Sparks reveals that he knows about Sam’s brother and the fact that she pulled some strings and got his brother out of a murder charge. Sam says that her brother is stable and is recovering now, she begs Sparks to “leave her brother out of this.”

Sparks calls his men and tells them that Sam Barton won’t be a problem anymore, and tells them to make a move on Molly. Back at the island, Ethan is out to dinner with his grandpa. John is taking a sample of Molly’s blood and they are going to conduct a DNA test of their own. While he is drawing Molly’s blood she has another hallucination of Marcus.

Ethan and his grandpa return home, and while his grandpa is unchaining the gate, Ethan disappears out of the back seat of the truck. A man is running through the woods with him holding his hand over his mouth so that he can’t scream. Ethan’s grandpa tells Molly and John that Ethan ran away. They head out in the woods to search for him, unbeknownst to them there is an entire tactical team out in the woods with him. The men take Ethan out to a clearing and zap him with a tool, draining the life from him. Meanwhile John is fighting with the police because they refuse to help when they learn that Ethan is a robot. He and Molly’s dad end up thrown in to a jail cell.

Molly finds Ethan lying in the clearing life less and she picks him up and tries to run with him, but a helicopter begins hovering above her. Molly wakes up and is strapped down to a bed. A few doctors are hovering over her in hazmat suits. Molly manages to get loose and stabs the doctor with a syringe, she runs from the room and falls in to another room full of doctors and collapses. Yasumoto watches as his men hoist Molly up on to an operating table.

Sparks and Gordon are inside of Molly’s Dad’s house. Gordon informs him that all of their personnel are cleared off from the island. Sparks finds the DNA test Molly and John had just completed, he pushes the button to see the results.

Yasumoto’s men have Molly strapped down to the operating table. She is in and out of consciousness as a laser slices her stomach open.