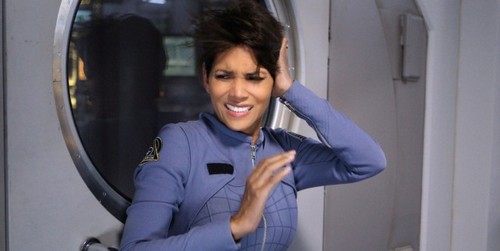 Tonight on CBS Extant returns with a new episode called, “Wish You Were Here” and on this new episode Molly considers telling John about her pregnancy, after he confronts her about her distant behavior. Meanwhile, some parents become suspicious of Ethan when he attends school for the first time.

On the last episode after Molly collapsed and experiences a vision of her encounter on the Seraphim, Sam agreed to give her an ultrasound so she can learn more about her mysterious pregnancy. Also, Molly tracked down Kryger and he revealed the disturbing details of his own solo mission that the International Space Exploration Agency (ISEA) was keeping secret. Did you watch the last episode? If you missed it we have a full and detailed recap, right here for you.

On tonight’s episode Molly has to decide if she is going to reveal her pregnancy to John after he confronts her about her distant behavior. Meanwhile, John and Molly face parents who are suspicious of Ethan when he goes to school for the first time.

Tonight’s episode of Extant begins with Molly lying in bed with John while he is sleeping, she has a flashback to when she and John’s fertility rounds failed and they think they won’t be able to have a child together. In her flash back, John introduces her to Ethan and suggests that they keep him and raise him together as their child.

John wakes up, and asks Molly to take the morning off with him, he wants to throw her a birthday party since she was gone during her actual birthday. Molly agrees, and John gets up to get Ethan ready for orientation at his school, while Molly heads out for her morning jog.

John leaves Ethan home with Gina, and Ethan promises him he won’t go outside and won’t answer the door. As soon as John is gone, Ethan rushes out to the backyard and begins building something out of a broom and duct tape.

Molly runs in to Alan, and he tells her she is right. He tells her there was a covert medical experiment done while she was in space, and doctors reversed her ovulation and implanted her own eggs which they seized from a fertility clinic she went to when she was trying to have a baby. Alan says the baby she is carrying is her’s and John’s. Alan also is concerned because she is experiencing the same hallucinations that Marcus was before he killed himself, and he wants her to go to the hospital for a few days so that they can observe her.

Later, John and Molly take Ethan to orientation at his new school. After Ethan heads in to school, the principal stops him and says that some of the parents have some questions for him. John reassures them that Ethan isn’t dangerous. Molly tells them that Ethan is “just different” and they “don’t have to be afraid of different.”

Molly fills Sam in on what Alan told him about the “covert medical experiment” and Sam assures her that there was no way any one in the medical department impregnated her with John’s eggs while she was in space. Molly decides to go find Harmon to see if they did any testing on him while he was in space. She finds his trailer deserted, and a creepy drawing all over the walls inside the trailer.

Molly heads to the school later in the afternoon with John to pick up Ethan. He emerges from the school unscathed, and even made friends with one of the student whose parents were afraid he was dangerous.

Molly’s birthday party is in full swing, Sam arrives and Molly rushes upstairs with her. Sam takes a sample of her blood in a test tube and promises to conduct a DNA test, and she says she will be back in two days. After Sam leaves, Molly’s drops to the floor in pain and has a vision of Marcus.

Sam arrives at the lab, but a guard refuses to let her down the hallway. He says there has been a chemical spill and no one is allowed in the wing. Sam argues that she just needs to in to her office really quick, but the guard doesn’t budge.

Molly’s party is breaking up, and the guests are leaving. She tells John that she wants to say good-bye to Marcus’s friend Tim. John informs her that Tim isn’t at the party, but she insists he is. She runs through the house yelling his name. Molly looks at a picture she took earlier that night with Tim by her side, and realizes that he never showed up in the picture, and she had imagined him.

After the guests leave Molly has a breakdown and confesses to John that she seen Marcus on the ship, and she “can’t keep going on like this.” She packs her bags and calls Alan to come pick her up and take her in to the hospital. John argues that she shouldn’t trust him, but Molly thinks that Alan is on her side.

Sam is still trying to get in to her office, she sneaks around the hallway and sees agents cleaning out her entire office and stealing all of her files. She calls John frantically and asks where Molly is, and John says that Alan took her. Sam texts Molly and tells her to “get out of the car.” Molly manages to overpower Alan and jump out of the car and starts running home. John picks her up in the road and they make a getaway. A few moments later Alan and a squad of men arrive at John and Molly’s house with guns drawn, but the house is already empty.