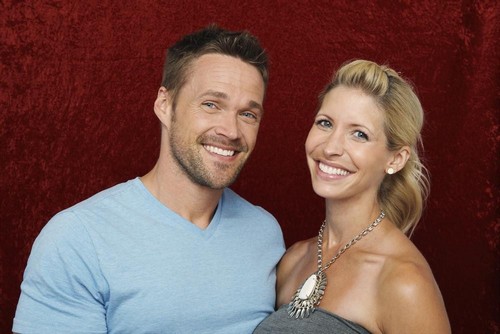 Tonight on ABC EXTREME WEIGHT LOSS returns with a new episode called, “Bruce.”  On tonight’s show a 382-lb. 29-year-old high-school-football coach attempts to lose half of his body weight.

On the last episode over the past 21 years, Kathie and her only child, son Josh, had slowly eaten their way into obesity as a way of dealing with the absence of Kathie’s husband – Josh’s father – who abandoned the family when Josh was only nine months old. Last year, Kathie wrote a letter to Chris Powell asking for help. Ultimately, both Kathie and Josh have to work separately to become stronger people together during their year-long transformation. Did you watch the last episode? If you missed it don’t worry we have you covered with a full and detailed recap, right here for you.

On tonight’s episode Bruce turned to food for comfort after allegedly suffering mental and sexual abuse by his now-jailed father. In this episode, he’ll take on the challenge of losing half his body weight and confront the underlying issue behind his weight gain during his year-long transformation

Tonight’s episode looks like it is going to be great and you won’t want to miss it, so be sure to tune in for our recap of ABC’s Extreme Weight Loss. While you wait for our recap hit the comments and let us know how you like the fourth season so far.

Tonight’s episode is about Bruce. At 29, he’s managed to become overweight to the tune of 382 pounds. But as we’ve seen before most of these contestants turn to food in order to deal with their inner demons. Which in Bruce’s case means he has to come to terms with his childhood abuse in order to get better.

When he was very young, Bruce’s father abused him and other children on the youth football team. His mother used to work late nights back then and it wasn’t until after Bruce’s suicide attempt that she became aware to all the problems at home. Nowadays his father is locked-up for his crimes however that hasn’t stopped Bruce’s unfortunate eating habits.

His father hurt him both physically and emotionally. He made his son feel worthless and though Bruce knows his father is wrong it hasn’t stopped the young man from hearing his abuser’s voice at his lowest moments. So the first thing Chris had to address with him is that Bruce has nothing to prove to anyone. All he has to do is live for himself until he is happy with his life.

Bruce had his childhood coaches there for support while he was growing up and that was what inspired him to go into coaching. They took him and looked out for him. But they’re not at the boot-camp with him. And they can’t be the only ones that can pick him again.

Chris was worried about what would happen if Bruce were to fail. He didn’t want the other man to give up on more than the exercising if that did happen. He was actually scared that Bruce would give up on life in general if he didn’t reach his goal weight so Chris pushed Bruce to the point he realized he has to be his own number one supporter.

And those first 90 days at boot camp were brutal. He had to work-out, see a nutritionist, and even go to therapy. Something long overdue! Although there was a crushing moment that nearly ruined all his progress. Bruce had hit his head and instead of getting it looked at he kept working out right up to he started to feel dizzy. The doctor later told him he had a concussion and because it had gone unnoticed for so long – Bruce had to sit out physical activity till he was better.

At the end of 90 days, Bruce weighed in at 261. He lost 121 pounds and that’s a feat. Chris has never done that with a trainee before so that was a first for him as well. Bruce has grown close to Chris and his wife. He’s become a part of the family. So their goodbyes after the weigh-in were pretty heartfelt. Everyone was in tears.

They won’t see Bruce again for another three months. And in that time he has the goal to lose 45 pounds. Bruce was told to focus on his nutrition seeing as the concussion symptoms hadn’t fully gone away yet. Though he did do some light exercising.

Chris checked in every now and then but he left the work-out mostly to Bruce and by his second weigh-in at 6 months – Bruce came in at 214. He lost 47 pounds – two pounds over his goal weight!

Chris arranged for Bruce to meet his childhood idol and he has another surprise in store for his friend. Bruce got to go to Raiders’ headquarters where he had a special tour waiting for him. He got to see the locker-room and the players had laid out the red carpet for him – their number one fan! After that he met Jerry Rice.

Jerry Rice is known as the having a strong work ethic and that’s why Chris introduced him to Bruce. The next six months are going to be crucial and Chris needed to know Bruce could do what it takes. But a second crushing blow could very well destroy Bruce and any chance he has of getting better emotionally.

It’s been 15 years since Bruce’s father went to prison and now the man’s up for parole. Bruce, as one of his father’s victims, was called in to attend the hearing and out of support both Chris and his wife went with him.

His father still doesn’t fully admit to what he’s done. And what makes the hearing worse is that his father’s family is seated across from Bruce glaring at him for testifying to begin with. So you know they didn’t like it when Bruce decided to speak to the Board. He was given the option to sit it out but he wanted to say what his father did. It was the only way he could ask them not to release the older man and finally close the door on all that his father did to him.

Though it took strength for him to confront that monster he did suffer a set-back with his weight loss. At 9 months Bruce weighed in at 196. Meaning he only lost 18 pounds in three months and Chris knows why. Bruce lost a different form of excess baggage and that’s due to his dad.

Bruce’s weight loss while not significant qualified him for surgery. That meant the doctors could remove the excess skin around his stomach. But Chris didn’t get to see Bruce when the surgery was over. Their next meeting won’t be till Bruce hits his year mark.

And after a year Bruce has gone through – with the weight loss and his father’s parole hearing – Bruce had one more weigh-in before he could be done with Extreme Weight Loss. He started out at 382 pounds and he finishes at 181 pounds. Making his overall lost be 201 pounds.

As a final gift, Bruce was given a scholarship to the weight loss boot camp and he gave it to his friend Erica so that she too can realize her full potential.