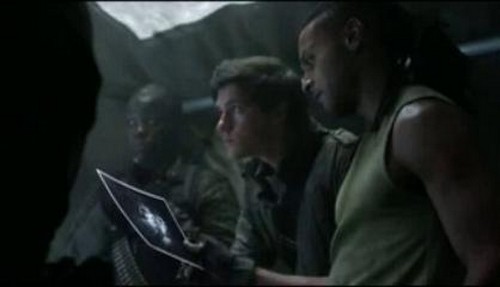 Falling Skies returns tonight on TNT with a new episode at 9PM EST called, “A Thing With Feathers.” On tonight’s episode fallout from a destructive alien attack finds the 2nd Mass picking up the pieces and Maggie fighting for her life.

On last week’s episode Lexi emerged more powerful and ruthless than ever. Tom and the 2nd Mass must work together with the Volm to hold off the invading Espheni forces in what became the bloodiest battle of the series. Mira Sorvino, Treva Etienne and Robert Sean Leonard guest-star. Did you watch last week’s episode? If you missed it we have a full and detailed recap, right here for you.

On tonight’s episode fallout from a destructive alien attack finds the 2nd Mass picking up the pieces and Maggie fighting for her life. Tom and Dingaan, cut off from the group and buried under rubble, seek possible rescue from an enemy ship.

Tonight’s eighth episode of season four Falling Skies is going to be great. You’re not going to want to miss a minute of the action and we’ll be recapping it live for you as well. While you’re waiting for the episode to begin hit up the comments and tell us your thoughts about the show and enjoy a sneak peek of tonight’s episode below.

Tonight’s episode of Falling Skies picks up where we left off last week, a major explosion has just rocked the entire city, and everyone is hiding in the fall-out shelter hoping that the aliens think they are dead. Tom is buried underneath debris and trying to dig his way out, he finds Dingnaan buried as well, and he is not in good shape.

Ben wakes up in a locked room, dazed and confused, with Lexi looking over him. He asks where they are and he says that they are “safe with their family.” Ben tries to leave but the door is locked, you can hear growling on the other side. Lexi says it is too late for him to go back to camp, and offers to show him their future.

Back at camp everyone has climbed out of the fallout shelter, and are searching for Tom Mason. They find Maggie and she is seriously wounded. Everyone thinks that Tom is dead, but Matt is determined to find him and swears he is alive. Captain Weaver agrees to help him dig for his Dad.

Dingaan and Tom are still crawling underneath the rubble, looking for a way to get out. Dingaan can’t get enough air and begins panicking. He starts screaming for help and beating the metal above him, Tom tells him to stop before everything caves in on top of them.

Anne breaks the news to Hal that Maggie is seriously injured and paralyzed from the neck down, she injured her spinal cord. Hal freaks out and says that they can’t just let her die. Anne agrees to talk to the Volm and see if Cochise can help.

Lexi takes Ben out on a balcony and tells him it is the “evolution of the species.” Espheni are swooping down and killing humans. Ben gasps that this is what their Dad warned them about. He screams to Lexi that “this is not evolution its genocide.” Ben tells her to “go ahead and make him her slave like she did Lourdes.” Lexi begs him to come away with her for her training.

The Volm reveals to Anne that they can extract a serum from Denny and inject it in to Maggie’s wounds and it should heal them. However the procedure is very dangerous, injecting alien DNA in Maggie could kill her. And, if they don’t extract it carefully it could kill Denny. Denny tells them to go ahead with the procedure because she knows Maggie would do it for her.

Tom and Dingaan find a hatch and manage to climb up inside it. While they are looking for an escape route, Tom places his hand on a plasma wall and it zaps him. He begins screaming in pain and drops to the ground, he screams that something is in his arm and then he passes out. Dingaan looks at his arm and can see something crawling under the skin up his arm.

Hal explains to Maggie that they are going to use serum from Denny’s spikes to save her. She tells him that she would rather die, she kills aliens and she refuses to become one. Hal tells Anne that Maggie gave them permission to inject the serum even though she clearly didn’t. Anne begins the procedure.

Dingaan ties a rope around Tom’s arm and grabs a spike off from the wall and cuts the monster out of his arm. Once Tom is in the clear they hear a beeping noise, Tom says that they just pulled a pin on a grenade. Dingaan begins having a panic attack and keeps saying “make it stop.”

Anne breaks the news to Hal that Maggie is rejecting the alien serum and her heart is weak. Hal confesses that Maggie didn’t want to do the procedure and he lied. Ben arrives and reveals that Lexi is gone over to the Espheni and is “off training.” He reveals that she showed him that they are mutating humans all ready. He tells Anne that he saw in her mind and the Lexi that they knew is gone. He discovers Maggie on the table and they fill him in. Ben refuses to let her die, he tells Anne to give her a full transplant, and he wants her to take one of his spikes and give it to Maggie. Anne argues that it is too dangerous and complicated, he could die.

Anne finally agrees, and the Volm comes in to help her do the transplant. She places Ben’s spike in Maggie, and she begins moving a little bit and groaning. Hal watches from her side waiting to see if she will recover. Matt is still outside digging with Weaver, he begs Matt to take a break but Matt refuses, he is determined to find his dad.

Meanwhile Dingaan reveals that the reason they are trapped is Karma. He confesses that he lied about his family being killed during the attack. He was building a swimming pool and he got distracted while he was talking on the phone. His son climbed in the pit and it caved in on him and he died. Then, his wife “drank herself to death” because she was so devastated over their son’s death.

Anne stops the procedure after inserting three spikes in to Maggie, she doesn’t want to give her anymore because she is afraid that it will kill Ben. Suddenly Ben and Maggie’s spikes both light up, and their bodies both begin convulsing on the table.

Matt and Weaver finally locate Tom and Dingaan and pull them out of the rubble. While Tom is hugging Anne, Hal rushes out and tells her that Ben is awake. They all rush down to the fall out shelter and Ben is getting dressed. Maggie is still unconscious, they have to wait and see if she wakes up. Tom and Anne head out to the bon fire outside where everyone is pouring out drinks for the people they lose in the attack. Tom informs Anne that there is no way they can go after Lexi right now, they needs to stay strong for the people that need them that didn’t switch sides or run away.

Maggie wanders out of the fall out shelter and Hal rushes to her. She smacks him across the face and says that is for betraying her. Then she kisses him and says “that is for saving my life.” Hal corrects her and says Ben is the one who saved her life. She feels her back and sees that she has spikes now. Hal wanders off and Tom chases after him. While they are talking about Ben they hear a noise, and realize that there is a full moon and all of the rubble underneath them is lighting up.