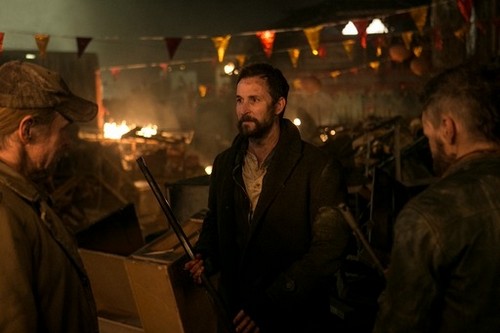 Falling Skies returns tonight on TNT with a new episode at 9PM EST called, “Saturday Night Massacre.”  On tonight’s episode Lexi becomes more powerful and ruthless. Elsewhere, Tom and the 2nd Mass work with the Volm to prevent an Espheni invasion, leading to an all-out battle.

On last week’s episode after months apart, Tom finally reunited with his family and the 2nd Mass. But the joyous reunion was cut short as Lexi underwent a health crisis tied to her hybrid DNA. The crisis pitted family members against one another as they fought over how to deal with Lexi’s illness. Anne went to great lengths to save her daughter. Did you watch last week’s episode?  If you missed it we have a full and detailed recap, right here for you.

On tonight’s episode Lexi emerges more powerful and ruthless than ever. Tom and the 2nd Mass must work together with the Volm to hold off the invading Espheni forces in what becomes the bloodiest battle of the series. Mira Sorvino, Treva Etienne and Robert Sean Leonard guest-star.

Tonight’s seventh episode of season four Falling Skies is going to be great. You’re not going to want to miss a minute of the action and we’ll be recapping it live for you as well. While you’re waiting for the episode to begin hit up the comments and tell us your thoughts about the show.

Tonight’s episode of Falling Skies begins with Lexi still in her cocoon, and her mom Anne watching from the other side. Lexi puts her hand up against the inside of her cocoon and opens her eyes, Anna jumps back as it looks like Lexi is hatching. She begins pulling the walls apart and climbs out of the sac. She takes a step and passes out. Tom and Anne wake her up and cover her with a blanket. They all gather around her and coddle her, but Lexi says she “needs to leave here.” Lexi says she needs her family, and not her human family, because their hearts are full of hatred and war. Tom warns her not to leave and says the crowd might hurt her, but she pushes past him.

Lourdes begs Lexi to take her with her, she insists that Lexi has saved her and given her a reason to live. Lexi says she will “set Lourdes free.” She touches the side of Lourdes’s face and Lourdes begins choking and drops to the ground. Everyone in the town’s square seems to be frozen and unable to stop Lexi. Lexi walks away nonchalantly and every one begins moving again, Anna drops to the ground and realizes that Lexi killed Lourdes.

Hal and Anne cry over Lourdes’ body, and Tom apologizes for their loss. Hal says that it is all Tom’s fault, they warned her that Lexi would be a monster when she came out of the cocoon. Tom insists that she is still a member of the Mason Family, but Hal doesn’t want to hear it and storms off. After he leaves Ann asks Tom to promise not to quit on her and Lexi, she still wants to save her.

Tom and Anne head to Roger’s lab and try to figure out if there is any way they can save Lexi. Roger says that Espheni Biotech is far beyond his realm of understanding and he thinks it is too late and Lexi has lost touch with humanity. While they are arguing over whether they can save Lexi, they are interrupted and told there is an emergency outside. Anthony has returned and says that he and Bennett ran in to the Skitters and they took them to the Overlord. Anthony says that the Overlord burnt Bennett to death right before his eyes. And, the Overlord’s face looked like he had been burnt before. The Volm explains to Tom that the Overlord that he burnt is back, and he wants revenge. Tom says, “it is going to get ugly around here real fast.”

The Volm pulls up his recon and says that the Overlord has at least five Skitter platoons “sitting right on top of them.” Weaver says they need to take out the bridge, to delay the skitters on the North side, Cochise agrees that he and his men will take out the bridge ASAP. Hal, Tom, and Weaver head out in the streets to devise a plan and begin preparing for battle. Weaver sends Dingaan to be the look-out and let them know when the Skitters are coming. The entire 2nd Mass kicks in to over-drive and gets ready for battle.

[11:04:15 PM] Amanda Austin: Ben gives his extra ammo to Maggie and says he won’t be fighting in the battle, he’s on “recon.” His little brother argues that no one told him he is on recon, but Ben confides in him that he is going after Lexi. He knows that she can help them stop the battle and she is still a Mason and will try to help. Ben tells his brother not to tell their dad and then he runs off to find Lexi.

Weaver reports to Tom and Anne that the kill-zone is “locked and ready to go.” Ben’s brother confesses to Tom and Anne that he left to go find Lexi. Anne thinks that maybe Ben knows more about Lexi and the Skitters than he was letting on. Weaver reassures Ben’s little brother that there is no way Lexi would hurt him.

The skitters arrive and Dingaan rushes back to warn the people. A group of Lexi’s followers lined up in front of the barricade on the knees, and were sure that the Skitters would “do them no harm,” but the Skitters laid them out. Hal and Maggie light the dynamite fuse, and sparks rain down on the Skitters, killing nearly half of them. Tom smells a busted gas line, and tells everyone to run, and seconds later an explosion erupts. Once the dust clears, Hal begins running up and down the street looking for Maggie, and panicking because he can’t find her. Anne reports that everyone at the barricade “got the full brunt of the explosion and they are all gone.”

Meanwhile Ben finds Lexi, and warns her that the Espheni are going to kill all of her family. Lexi says that is not going to happen, and tells Ben to come with her. A ship lands, and the lights in the back of Ben light up. He begins following Lexi to the space ship.

Pope and Tom are bickering over what they should do next. Tom says that the next round of Esphenies will arrive in ten minutes, they decide to all hide in the fallout shelter and pretend to be dead. They head to the lab to get Roger and find him a huge piece of glass sticking out of his back. As he lays there dying he apologizes for not being able to save Lexi and hands the remnants of her test samples over to Anne. Right before Roger dies, he tells Tom to “bring Lexi back.”

After all of the survivors hide in the fallout shelter, Tom reveals that he won’t be hiding, he is going to wait for the Overlord arrive and kill him. Anne and Weaver obviously try to talk him out of his suicide mission, but he isn’t hearing them.

Dingaan is guarding the door to the fall out shelter, Hal runs in and realizes Maggie isn’t in the shelter. He tries to leave to go look for Maggie, but Weaver and Anthony won’t let him back out of the shelter. The next wave of Espheni arrives, and they all hold their breath as they listen to them walk on the ground above their heads. The Overlord arrives and begins scouring the city for Tom. Tector convinces Tom to go get some oil, and he takes a shot at the Overlord while Tom is gone. When the Overlord shoots back, Tector blows up a Skeeter with a bomb strapped to his chest, killing himself in the process. After Tector’s explosion, Tom wakes up, coughing, and trapped underneath slates of rock.