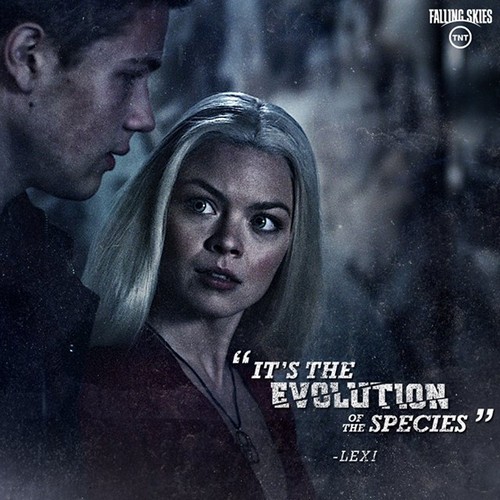 Falling Skies returns tonight on TNT with a new episode at 9PM EST called, “Till Death Do Us Part.”  On tonight’s episode Tom and a team track the Volm in an attempt to find equipment to work on a crippled airship. Meanwhile, Maggie and Ben inch closer together at camp while Pope and Sara clash.

On last week’s episode fallout from a destructive alien attack found the 2nd Mass picking up the pieces and Maggie fighting for her life. Tom and Dingaan, were cut off from the group and buried under rubble, seek possible rescue from an enemy ship. Did you watch last week’s episode? If you missed it we have a full and detailed recap, right here for you.

On tonight’s episode while members of the 2nd Mass attempt to dig out a shot-down Beamer, Tom and a small team follow the Volm to a supply cache in search of equipment to expedite the process. Along the way, they encounter a friend, and must decide whether or not to trust her. Back at camp, Maggie and Ben grow closer as he teaches her to hone her new skills, while Pope and Sara (guest star Mira Sorvino) continue to clash, resulting in a fight from which they may never recover. Treva Etienne guest-stars.

Tonight’s ninth episode of season four Falling Skies is going to be great. You’re not going to want to miss a minute of the action and we’ll be recapping it live for you as well. While you’re waiting for the episode to begin hit up the comments and tell us your thoughts about the show and enjoy a sneak peek of tonight’s episode below.

Tonight’s episode of Falling Skies begins with Cochise and Tom and Captain Weaver investigating the crashed Espheni space ship. They realized that it is run from an electric power source on the moon. They realize that the power source on the moon is powering the entire Espheni war machine. Tom says that have to get up to the moon and blow up the Espheni’s power source. They all think that Tom is crazy. Tom asks Cochise if they can “hitch a ride on the beamer” to the moon. Cochise says his plan is crazy, but it might just work. They have a beamer buried in the rubble from the explosion, they decide to dig it up.

The next day everyone begins working to unbury the beamer. Maggie comes out to see Hal, she rants about having alien DNA coursing through her veins and how much it hurts. Anne is hard at work helping dig out the beamer, she reiterates to Tom that she thinks his plan is nuts, but she is helping because it is giving every one hope. Tom tries to talk to Anne about Lexi, but she says she would rather keep to herself. Corchise reveals to Tom and Weaver that there is a Volm supply cache hidden not far from them, he says there is a tool in the cache that can shoot sound waves and deteriorate boulders in to sand. They can use it to dig out the beamer.

Ben offers to help Maggie cops with her new alien DNA because she can’t think clearly, she takes him up on his offer and Hal approves. Meanwhile, Tom and Anne are arguing about Lexi. He accuses her of bottling her feelings up and living in denial. Anne argues that she spent months looking for their daughter, and he doesn’t believe that Lexi isn’t too far gone.

John finds Sarah taking Vicodin, and is furious with her because she fell off the wagon and was just preaching about her sobriety. Cochise, Weaver, Anne, Ben, and Matt head to the cache which is buried in a toxic dump site. They all put on their gas masks because they can’t breathe in the toxins. Mira apparently followed them, and runs through the dump site to catch up to Matt without a gas mask, she drops to the ground hyperventilating.

They get Mira out of the toxic dump and breathing normally again, Anne says she’ll be okay. Mira reveals that she just escaped from the camp she was staying at with Matt. She was training to track down militias and refugees, she was supposed to be tracking down runaways from the Esphenis and return them. Tom thinks that it is shady she showed up at the Volm’s supply cache, he ties her up while they go ahead, even though Matt argues that she is his friend.

Ben and Maggie are on top of the roof, and he is trying to get her to try out her new super alien strengths and jump to the ground. She tells him to “back off,” but he convinces her to trust him and they hold hands and jump off form the roof together.

At the VOlm supply cache, Matt heads back to check on Mira while every one is digging up the supplies. She convinces him to untie her hands and complains that they are hurting. After he unties her hands, she pulls a whistle out of her shoe and “sounds the Espheni alarm.” Tom was right, she was playing Matt and she has crossed over.

Maggie is in a much better mood after their jump, she is shocked that the pain from the transplant is gone. Ben says that her spikes are starting to realize they are a part of her now, and explains that the spikes have feelings of their own and they increase all of your emotions. Ben opens up to her and discusses losing his mom, both of their spikes start humming and they realize they are linked together and Maggie can feel all of Ben’s feelings of sadness.

At the cache, Cochise and Tom dig us some weapons. Matt comes running and warns Tom that Mira blew the whistle she had in her shoe. Suddenly a ship flies over their heads and drops a bomb on the supplies, they all run for cover.

Pope and Sarah are rguing, she wants to talk to him, but he doesn’t want anything to do with her. He accuses her of being an addict, and being a weak liar. He refuses to be someone for her to use and lie to and tells her to “move along.” Sarah reminds him that she has fought side by side with him and risked her life for his. She reveals to him that the bottle doesn’t have any Vicodin in it, it’s only Tylenol and throws it at him and leaves.

The leaders form the youth camp show up at the cache, and get in to a shoot out with Tom, Anne, and Weaver. Matt chases Mira in to the woods and one of the leaders from the youth camp shoots him in the neck with a dart. Before he passes out he begs Mira to help him, but she tells him “it’s too late for that.” Anne gets shot in the shoulder, while she and Tom are hiding from one of the leaders. Before Tom kills him he reveals to them that they have his son Matt. Once all the leaders are taken down, Cochise and Weaver return with Matt, they were able to get him back.

Maggie and Ben are still trying out her new powers, she jumps through the air doing flips and shooting moving targets. Both of their spikes light up and start buzzing, and they begin kissing. Hal watches Ben and Maggie make out from around the corner. Maggie suddenly pulls away and remembers that she loves Hal. She says that before she never was attracted to Ben, but now she feels drawn to him and tries to kiss him again but Ben tells her not to and walks away.

The next day Hal asks Ben how his training with Maggie went and then he punches him in the face. He tells Ben he was supposed to help Maggie with her spikes, that didn’t mean it was “open season on his girlfriend.” Ben stands up and snaps back, “sorry I didn’t see your leash on her.”

Tom, Cochise, Weaver, Anne, and Matt arrive home. Everyone is still digging, they reveal that they were ambushed and everything in the cache was destroyed. Tom corners Ben and Hal and asks what happened to Ben’s face. They both plead the fifth. Tom heads underground with Anna and teases her about running out and distracting the team leader at the ambush so that he didn’t shoot Tom. They share a moment and Tom gets down on one knee and asks her to marry him. She accepts his proposal. They head outside and Weaver officiates their vows while everyone circles around them. Tom and Anne are officially married! Right before Tom kisses his bride, Cochise interrupts and says that he needs to discuss the beamer with him. He dissected the whistle they took from Mira, and when he blows it, the beamer they have been digging up flies up out of the rubble. While it hovers above them, Tom announces, “We are going to the moon.”