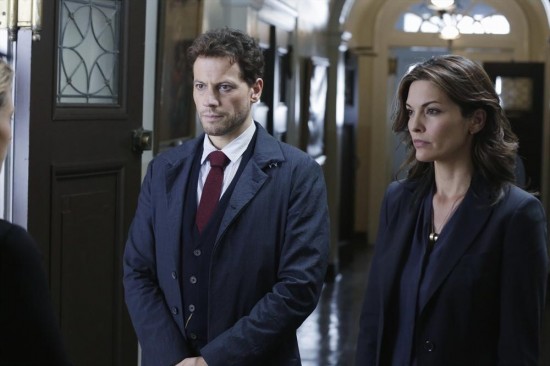 On the last episode when a human heart was delivered fresh out of a body to the homicide division, Henry and Jo ended up in the middle of a Jack the Ripper copycat murder investigation. But it doesn’t stop there. A second killing resembled another infamous, unsolved crime: the Black Dahlia murder. Henry had seen it all before, as flashbacks showed his involvement with the two original cases from two very different periods of his long life. However, Henry’s anonymous caller tipped him to search beyond the clues of these classic killings and lead the police squad to profile a very different, yet disturbed suspect. Did you watch last night’s episode? If you missed it we have a full and detailed recap right here for you.

On tonight’s episode, Dr. Tyler Forester, founder of a free medical clinic and the son of a Wall Street billionaire, is awarded one of the city’s highest honors for his humanitarian efforts. A few hours later, he is found dead in his tiny apartment. Henry and Jo discover that Tyler’s life of privilege and those of his thick-as-thieves Hamilton School classmates took a fateful turn one night many years ago. Now, the nightmare they thought they buried deep within themselves has come back to haunt them. Meanwhile, Henry recalls being faced with the terrible dilemma of being forced to decide between saving a man’s life and protecting his own secret. Now, he is faced with the same predicament, but will he come to the same conclusion? And Abe shares a deeply held secret of his own with Henry.

Tonight’s episode is going to be another great episode, which you won’t want to miss. So be sure to tune in for our live coverage of ABC’s Forever Season 1 episode 7 — tonight at 10PM EST!

Tonight’s episode of Forever begins at an awards ceremony, a man named Tyler is called up to except an award for giving back to the community.  The next day Henry and Jo are called to Tyler Forrester’s office, where he was murdered.  Jo explains to Henry that JO is actually the son of a billionaire.  Henry scopes out the scene and says that Tyler was killed around 11:30 PM and the shooter was between 5”9 and 6”2.  Jo is perplexed though because the lock on the door was broken from the inside, which means the murderer was let in and the broke the lock when he was leaving, so it is most likely someone that Tyler knew.

Henry begins examining Tyler in the morgue and is intrigued by his roman numerals tattoo across his chest.  Tyler’s father arrives at the morgue, he had no idea Tyler had a tattoo, and he confesses that he didn’t know Tyler that well.  Apparently Tyler pushed his parents away when he went to college.  He also reveals that Tyler was broke, he refused to accept any money from his parents, and the little money he did make he gave away to charities.

Henry and Jo head to Tyler’s memorial to see if they can track down anyone with a motive to kill him.  They introduce themselves to a man named Paul Gould, who claims to be a friend of Tyler’s.  He was just as shocked as Tyler’s dad to hear that Tyler had a tattoo.  Another one of Tyler’s friends, Carter, says he is more than willing to help with their investigation.  Carter says that he seen Tyler the night that he was murdered, he presented him with the hero award at the award’s ceremony.  Henry asks Carter if he knows why the date June 10th 2005 was important to Tyler, but Carter changes the subject and rushes off.  Henry and Jo notice a picture at the memorial of Tyler and his friends in their high-school graduation gowns, and the timestamp on the picture is June 10th 2005.

Henry and Jo sit down with Tyler’s mother, she explains that the picture was taken at their graduation.  The people I the picture with Tyler are Cassandra and Paul.  Cassandra was dating Paul at the time, but Tyler had a crush on her.  After they graduated they left to spend the summer in the Hamptons, but Tyler only stayed a few weeks and then came home.

Lucas runs a test on the substance found at Tyler’s murder scene, and reveals that it is boat fuel.  He also found a piece of human hair on Tyler’s body, it belonged to a woman.  Henry tells Lucas to contact Tyler’s high-school and see if they kept a DNA database of their students.

Jo and Henry bring Cassandra and Paul in for questioning.  Paul says that Tyler got “bummed out” during their summer in the Hamptons because he liked Cassandra.  Cassandra reveals that a few years ago Tyler actually gave Paul a key to his place.  Carter thinks that Paul was jealous because he thought that Cassandra and Tyler as well.  After spending the day with Tyler’s high-school friends Henry comes to the conclusion that Carter and Tyler were both dating Cassandra, and Paul was still in love with her.

After searching Tyler’s apartment, they find a strange video.  In the video Tyler says “This is for Mr. And Mrs. Meechum, it’s about what we did to your son.”  Then, Paul comes in and asks Tyler what the hell he is doing and turns off the recorder.  Jo and Henry heads back to Paul’s house to discuss the video with him, unfortunately when they arrive Paul is lying on his couch unconscious, he has overdosed.  Henry ransacks his kitchen and finds sour milk and baking soda and forces it down Paul’s throat to induce vomiting.

After Paul is taken to the hospital, Henry searches his apartment and finds a hiking book for The Hamptons, and a trail that Paul has circled.  There is fresh mud on his boots, so Henry thinks that he must have just gotten home from that trail.

Jo runs a search on the Meechums, and finds out a 17 year old named Robert Meechum went missing in the Hamptons and is presumed dead.  His parents reported him missing on June 10th 2005.  Jo and Henry head to the Hamptons to dig up some dirt on Robert Meechum.  They head to a gas station where Paul’s credit card was charged, they look at the security tape and see that Paul and Carter both went to the Hamptons and they ditched a shovel in the dumpster at the gas station.

Henry and Jo assemble a team and head to the nearby woods to search for a grave or anything that was recently dug up.  Henry finds a young tree with lush leaves, and says that it is too fertilized.  They dig up the base of the tree and find a skeleton.  Henry announces they just found the remains of Robert Meechum.

They take Robert Meechum’s bones back to the morgue for further investigation, they finds Cassandra, Paul, and Carter’s DNA in the soil where Meechum was buried.  Henry reveals that Robert’s cause of death was most likely from being hit by a car.

They bring Paul, Cassandra, and Carter in for questioning.  Paul confesses that Cassandra was driving home, they were drunk and didn’t see Robert in the road.  Carter lies and says that Paul was driving, not Cassandra.  Cassandra confesses that they killed Robert, but she cries that she never kwould have hurt Tyler and she didn’t kill them.

Henry is going over Tyler’s case file and realizes that one of the charities that Tyler donated money to is the company that owns the gas station where Paul and Carter were photographed throwin the shovel in the dumpster.  They head back to the gas station and the owner confirms he has worked there since he was a kid, and he was there the night that Robert Meechum was killed.  Jo asks him if they can take a look at his bank records, he opens a drawer and pulls out a gu and fires at Henry and Jo and runs out the back door.

Henry is clipped in the arm with a bullet, Jo chases after the owner of the gas station.  She tracks him down in the woods, but Mr. Morris refuses to drop his gun.  Henry arrives and explains that he knows Morris was blackmailing Tyler.  Jo fires at Morris, and gets him down to the ground and handcuffs him, they transport him back to the station and charge him for murdering Tyler.  After Tyler refused to send him any more hush money, Morris confronted him in his apartment and wound up killing him.