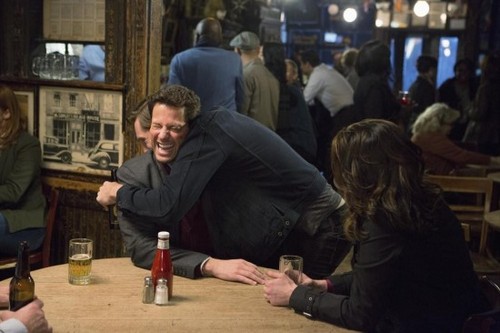 On the last episode Dr. Tyler Forester, founder of a free medical clinic and the son of a Wall Street billionaire, was awarded one of the city’s highest honors for his humanitarian efforts. A few hours later, he was found dead in his tiny apartment. Henry and Jo discovered that Tyler’s life of privilege and those of his thick-as-thieves Hamilton School classmates took a fateful turn one night many years ago. Now, the nightmare they thought they buried deep within themselves had come back to haunt them. Meanwhile, Henry recalled being faced with the terrible dilemma of being forced to decide between saving a man’s life and protecting his own secret. Now, he was faced with the same predicament, but would come to the same conclusion? And Abe shared a deeply held secret of his own with Henry. Did you watch last night’s episode? If you missed it we have a full and detailed recap right here for you.

On tonight’s episode as per the ABC synopsis, “Henry and Jo discover there is a fine line between pleasure and pain when the death of a successful businessman and devoted husband points to a form of ritualized punishment. Henry learns it may be all a question of trust. The man’s “domination therapist” comes under scrutiny as a murder suspect, who also wants to help Henry work through his own issues. Flashbacks reveal Henry’s emotional story of betrayal after he shares his secret with his first wife, Nora. Meanwhile, Abe is flabbergasted when the object of his intense passion –Maureen Delacroix — his two-time ex-wife, reappears with a tempting offer.”

Tonight’s episode is going to be another great episode, which you won’t want to miss. So be sure to tune in for our live coverage of ABC’s Forever Season 1 episode 8 — tonight at 10PM EST!

Abe finds Henry in the basement and asks him why he isn’t in bed – Abe says he has been out drinking and Henry is upset because he looks dehydrated.  He catches a whiff of perfume on Abe and realizes that he has been with his ex-wife Maureen, he reminds Abe that they fought like wild animals and they were divorced twice.

In the morning Henry and Jo head to a murder scene in an alley where the man that was being whipped was found, his name is Richard Gaines. Jo says that he was dumped out of a moving car and this isn’t the actual crime scene.  They take him to the examiner’s office and take his shirt off and realize he was whipped hundreds of time.  Henry says that judging from the months old scars on his body – he gets whipped on a regular basis and it is most likely for pleasure.  Henry says there is “a fine line between pleasure and pain” though.

Jo and Henry pay Iona a visit at her office.  Iona confirms that she had a session last night with Robert at 9:00 PM, but she has no idea that he is dead and is shocked to hear that someone strangled him to death.  She refuses to tell them what happened during the session and says that it is private, she is appalled that they think she is the one who strangled him.

Maureen stops by the shop and pays Abe a visit, they start making out in the middle of the store and Maureen coos that they have learned from each other’s mistakes.

After work Henry pays Iona a visit at her office ad says that he wants to talk about electrocution.  She admits that she uses electrocution sparingly on her clients, but if it is done correctly then it won’t kill you.  Iona offers to show Henry, and handcuffs him and hoists his arms up over his head.  There is a knock at the door and Iona leaves Henry hanging and opens the door.  It’s Jo and Hanson – they have come to arrest Iona (who’s real name is Molly) because the cattle prod they found is covered in her fingerprints.  Jo finds Henry hanging in the other room and tries not to laugh.

Back at the police station Jo reveals to Henry that Iona used to be a real therapist, but she lost her license because she had an affair with a patient of her’s named Joseph Briggs, and when she tried to break it off with him he killed himself.  Henry heads in to the interrogation room and tells Iona that “it isn’t looking good” for her.  She confesses that she learned her lesson about getting involve with patients after Joseph – and she would never have crossed a line with Richard, he wasn’t even her type.  Henry begs her to give him the name of the client she was with after Richard left so he can clear her name, but Iona refuses and says she has to protect her patients’ anonymity.

Henry and Jo head back to Iona’s office to search for clues about Richard’s murder.  They find her appointment book and realize that she had another client at 11:oo PM.

Unfortunately she used code names for her clients and all they have to go on is the name “Schopenhauer.”  While Henry is rifling through her appointment book – Jo fids a surveillance device hidden on the book shelf, someone had bugged Iona’s office.

Hanson runs the ID number on the surveillance piece and links it to a private investigator – they bring him in for questioning.  He says that Richard’s wife Gwyneth is the person that hired him, she was afraid that Richard was cheating on her with Iona.

Jo brings Gwyneth in for questioning, she confesses that she went to see Iona at 11:00 PM because she wanted to know what it was that made her husband keep going back to her.  She agrees to sign a statement saying she was with Iona when her husband was murdered, so Jo has Iona released from jail.  After she leaves the police station she runs in to Henry outside and says she is going to send him racy pictures and kisses him before she leaves.  Henry starts walking down the street and a black van screeches to a halt beside him.  A man in a hoodie jumps out and taisers him and throws him in the van and drives away.

Henry wakes up in the back of the van and the man driving electrocutes him again.  Abe calls Jo frantic because Henry never came home from work.  Jo heads out of the police station and finds Henry’s pocket watch lying on the ground.  She and Hanson pull the security tape footage and see the man in the hoodie throwing Henry in his van.

They manage to get a photo of the tattoo on his arm, and Jo recognizes it from a guy she seen leaving Iona’s office.  She races to Iona’s and shows her the picture of the mystery man’s tattoo – Iona confirms he is her patient and his name is Cliff.  She says Cliff began acting strange and obsessive and crossing boundaries during sessions so she stopped seeing him – and she gave Richard his old time slot.