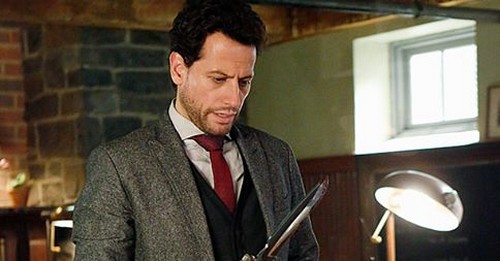 Tonight on ABC their new show Forever continues with an all new Tuesday, December 9, season 1 episode 10 Finale and we have your weekly recap below. On tonight’s episode called, “Skinny Dipper”, a cab driver is murdered with an antique sword.

On the last episode, when all the ingredients for a sensational, scandalous murder investigation were combined — a fairytale romance gone wrong, a jealous mentor and lover, an anxious, wealthy father of the beautiful fiancée – did love really conquer all? An engaged British aristocrat turned up dead in Central Park, and his identity was called into question, as well as who killed him. The trail leaded Henry and Jo through one of New York’s top luxury department stores and from working class to upper crust New York society. Henry remembers back to 1957 when, once again, he and his family had to pack up and move to protect his secret. Coincidentally, Abe crossed paths with the woman who he memorably shared his first kiss with as a youngster. Did you watch the last episode? If you missed it, we have a full and detailed recap right here for you.

On tonight’s episode as per the ABC synopsis, “when a taxi cab driver is killed with an antique sword, it is just the start of the tangled web the anonymous caller weaves to draw Henry under his influence. But what is “Adam” really after? After a second victim is murdered, “Adam” attempts to frame Henry for the crime. Can Henry trust Jo to tell her the truth? Or is it time for Henry and Abe to leave town? Just as they get ready to flee, Henry attempts to exact revenge on “Adam,” which culminates in the shocking revelation about the true identity of Henry’s secret stalker.”

Tonight’s episode is going to be another great episode, which you won’t want to miss. So be sure to tune in for our live coverage of ABC’s Forever Season 1 Finale — tonight at 10PM EST!

The last we saw of them, “Adam” was taking Henry on a joy ride through the city but ultimately Adam merely wanted to prove to Henry that he was who he said he was. Adam killed himself to prove he was immortal and that kind of left Henry trapped in an unmanned car. So he ended up dying as well.

But, one thing always happens when Henry “dies”, he later wakes up naked in the river. And this time the cops caught him on his midnight swim. So he was forced to come up with an explanation to his boss, the Lieutenant, on why he was swimming naked in a public river.

Henry came up with sleepwalking on and ran with it. Though the rest of the quad kind of took him to task for it. They later made fun of him by giving him water goggles and a thong. The thong of course being optional.

Fortunately, though, a new corpse drew the attention away from Henry. But not in the direction Henry would have liked.

The victim’s name was Raj Patel and it was his cab Adam had apprehended for his little stunt. So odds are Adam killed him. And if it is Adam at fault then Henry now has to consider how he’s going to explain away an immortal serial killer to the cops.

Abe thinks Henry should come clean with Jo. That way they’ll be investigating the case together rather than have Henry risk going it alone. But Henry ignored Abe’s advice and attempted to find his own evidence against Adam.

And that funnily enough led to Henry’s second arrest for indecent exposure. The story went like this – after Henry had learned an historic gun was used in the same cab as earlier he then went to the docks and tried retrieve bullets himself. Meaning a second naked swim was called for. However he was caught by the cops before he could go in.

After the first time, Reece didn’t really want to accept Henry’s story about sleepwalking. So Henry simply told her the truth. Or at best his version of it. He told her he had found evidence that could lead to Raj’s killer. He also said he hadn’t wanted to around for the cops at the time and that’s why he took the initiative.

But Reece was worried about emotional state. So she sent him to be evaluated by a therapist and Henry has an aversion to therapy. The last time he tried it – his wife had had him forcibly committed.

While Henry was busy being assessed, Jo and her partner Hanson had coordinated a dive for the bullet fragments Henry had bene talking about. And the bullets did give them a name. Though it wasn’t Adam’s or a possible alias.

The evidence led the detectives into finding a second victim. And just like Raj, this victim was set up to make Henry appear at fault.

Henry got lucky with Raj. The water had washed away all the evidence that could have been used against him. But the second victim was killed and then had autopsy performed on him. The cuts were made just like Henry’s and the killer had even used Henry’s knife.

So Henry had two options left. He could come clean or he could run. He chose to run but he never made it pass packing his bags. Jo had stopped him. Before he could flee. She had wanted to know why he was acting so strangely and yet she caught him with the murder weapon in his hand.

And that’s what finally pushed Henry to tell the truth. Again, his version. He told the detectives and the Lieutenant about his stalker. He said a man that was obsessed with death had been falling him around. And that for a while it was all pretty harmless. Then the stalker began killing people and that’s when Henry says he decided to run.

He told them he thought the killer would stop if he wasn’t around anymore. And his coworkers had assured him that he didn’t have to worry about his guy – they promised they were going to catch him.

And to be fair they did get close to following up on that promise. They found out the connection between the two victims. It seemed they had both worked at Bellevue. The same hospital Henry had to go to for his therapy session. Yet they missed their suspect by a mere few minutes.

Though the same man they were looking for later showed at Henry’s place.

The guy had wanted Henry to kill him and Henry was going to refuse but then Abe came home and Henry couldn’t risk his son getting hurt. So Henry killed the man he thought was Adam and as it turns out – the man he killed wasn’t immortal. His body didn’t disappear after he was killed.

So, really, he was just unstable young man who the real Adam must have preyed on. But that means the anonymous killer is still out there. Just waiting and watching.  Though he’s no longer afraid about revealing himself.

Adam, the real Adam this time, is Henry’s therapist.