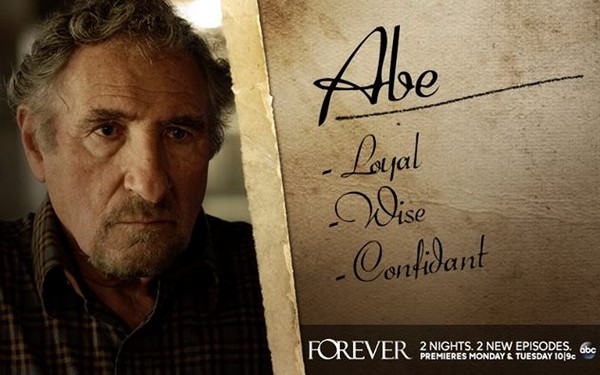 Tonight on ABC their new show Forever premieres with an all new Monday September 22 season premiere episode. On tonight’s show called, “Pilot” a fatal subway collision is investigated in the opener of this series, in which a New York City medical examiner attempts to uncover the truth behind his inexplicable immortality.

For those of you who aren’t familiar with the show, New York City’s star medical examiner, has a secret. He doesn’t just study the dead to solve criminal cases, he does it to solve the mystery that has eluded him for 200 years – the answer to his own inexplicable immortality. This long life has given Henry remarkable observation skills which impresses his new partner, Detective Jo Martinez (Alana De La Garza). Each week, a new case and their budding friendship will reveal layers of Henry’s long and colorful past. Only his best friend and confidant, Abe (Judd Hirsch) knows Henry’s secret.

On tonight’s episode in the what if you could live forever? Would you find it a blessing or a curse? Meet Dr. Henry Morgan (Ioan Gruffudd), New York City’s star medical examiner who has an unusual secret. He doesn’t just study the dead to solve criminal cases — he is trying to solve a mystery that has eluded him for over 200 years: his own inexplicable immortality.

Tonight’s episode is going to be another great episode, which you won’t want to miss. So be sure to tune in for our live coverage of ABC’s Forever Season 1 premiere — tonight at 10PM EST! While you wait for our recap, hit the comments and let us know how excited you are about the return of Betrayal tonight.

On tonight’s premiere episode of Forever, we’re introduced to Dr. Henry Morgan. A charmer who apparently has a bit of Sherlock famously honed intuitiveness about him. This means he can both notice the little things and make correct observations from off of them.

That and the accent has made him quite a hit with the women!

And yet none of that really counts once you get to know Henry. What makes him divinely unique, the reason a lot of people would love nothing more than to get him under a microscope, is the fact he was born nearly two centuries ago and since then he’s never been able to stay dead for long. Henry is immortal but oddly enough he does have the ability to die.

He can even feel pain while dying. It’s just that after he dies – he always wakes up again – naked and in some place or another that ends up being potentially embarrassing for him. For instance, after he survived a horrific accident on the train he then woke up in the river.

The river holds a special connotation for him because his first death happened when he was thrown overboard for refusing to let a slave die during transport needlessly. So waking up in whatever body of water that’s the closest might be a thing for him. But besides the occasionally arrest for indecent exposure his rebirths lead to, Henry has generally tried to opt out of the limelight.

Although, lately a lot of people seem to be catching him on one of his lies. Someone had called Henry leaving a threatening message about knowing of his special condition. It also looks like the same person was behind the train crash and did it in order to draw Henry out. And then there’s the detective investigating the subway crash. She caught him on the surveillance camera getting on the train. So now he has to side step a man that was willing to kill a group of people to simply prove Henry was immortal and fend off the inquisitive Detective Jo Martinez.

Jo later brought him in for questioning because she thought he was the one behind the crash. Though she didn’t have enough evidence to actually hold him. Hence Henry was free to continue with his investigation and track down the real culprit. Which he did by the way!

However the culprit, as it turns out, had his own reasons for causing a massive pile up and killing tens of people. And those reasons had nothing whatsoever to do with Henry. The killer and the stalker aren’t the same person. Evidence later revealed, the killer targeted the train conductor because the same conductor accidentally killed his wife. The wife had fallen off the platform at Grand Central station and the train wasn’t able to slow down in time to stop short of hitting her.

It was a terrible and unavoidable accident that a grieving husband is currently using to justify the countless murders. First he targeted the conductor and then he pursued the idea of causing an incident inside of Grand Central. By time Henry and Jo arrived on the scene, their killer was already two steps ahead.

Jo was injured and so it was up to Henry to stop a catastrophe. And he had no other choice than to die again. He flung himself and the killer off of the roof. But official reports will say the killer finally grew a conscience in his last moments on earth and decided to take his own life rather than to continue on a killing spree.

Though a few people know the truth. Henry, the stranger that appears to be stalking Henry (yup he saw Henry walk away from that too), and Jo. Jo’s memory is a bit foggy but deep down she knows Henry had died that night. And until she learns what he truly is – she simply going to think the scene she remembers was a mere hallucination.

As for the stalker, this man wants to get to know Henry. He says the two of them are alike and only time will tell if that’s a good thing or not!