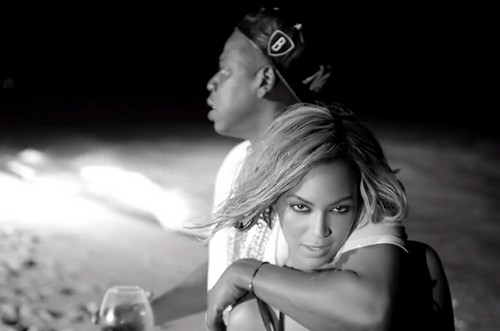 Guilt by association? Kim Kardashian’s very good friend Ciara is engaged to and carrying the child of rapper, Future. Future alleges that he wrote a melody for his song “Good Morning” that Beyonce ended up using in “Drunk in Love” without crediting him for his work. Even worse, because Bey’s song got out sooner, Future has been told not to release his song in which the melody originated. Is Beyonce secretly getting some pleasure knowing Kim’s friend just came up short as she earned mega success with Drunk in Love? Perhaps Future should have suggested better friends for his fiancé.

Future gave an interview to CRWN host Elliott Wilson. When Wilson brought up the fact that there was word of some controversy about Good Morning and Drunk in Love, Future was happy to clear things up. He told Wilson, “Detail came to the studio like. He cut the music off – ‘Man I’m about to work with Beyoncé. Can you please do this record man? She like the way you do yo’ songs’ ..and she this and that. We were working so much together, he ended up getting me to do it. He put me in the booth. The song was already pre-wrote. I started doing the little melody – my melody that you can pretty much tell from “Turn on The Lights.” If you listen to the records these are the same melodies I’ve been doing — “Never End,” “Turn Off The Lights”. If you go back to my mixtapes you hear my melody all over it — so it wasn’t that issue.” He goes on, “It was just, he was working with her, ended up cutting the record first & gave it to her. We had did the record about 8 months before she put it out.” Future responded to Elliot’s comment that both songs have the common line, “we be all night,” by revealing that everything was written around the same time.

Future shared that although he was still planning to release “Good Morning,” producer Noel Fisher, professionally known as Detail, advised him not to. Not only did Future lose the chance to release his song, he wasn’t properly credited for the work he had allegedly created. Detail and Beyonce have since been enjoying the benefits of a hit song that has been climbing the charts. If Future did truly write the melody and some of the lyrics Beyonce used, he sure is taking it well. If he didn’t, he is likely going to have a hard time working with any producer after making these claims against Detail. What do you think CDLers? Did Detail and Beyonce jack Future for his music? Does Future need some publicity and this is his way of getting it? Weigh in below!