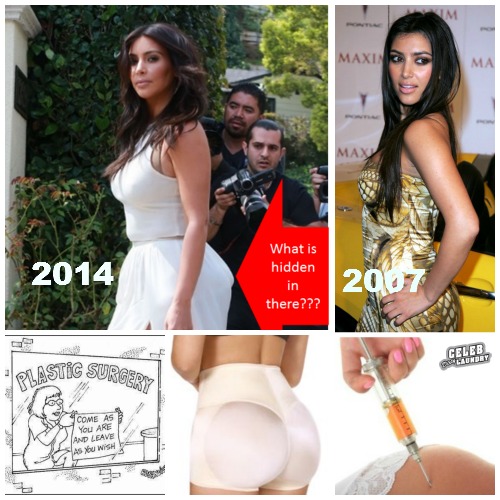 Apparently Kim Kardashian is ignoring the loud backlash that has come on the heels of it being announced that she and baby daddy Kanye West are indeed on the April cover of Vogue magazine. She turned up in West Hollywood on Saturday to celebrate R&B singer Ciara’s baby shower with not a care in the world. At this point Kim absolutely expects to be the center of attention wherever she goes and doesn’t seem to grasp that her presence is merely tolerated by many. I mean, do you really think that Ciara, a woman who clawed her way through the competition to become a bonafide singer with real talent, respects a woman like Kim? I mean, my guess is that Ciara never would have let Ray J anywhere near her even if it meant she could fastrack herself to the top of the charts.

Kimmie is a joke to everyone but herself, Kanye and apparently Anna Wintour for at least the next 4 weeks. And who can keep up with her ever-changing look. I’m not talking about dropping the baby weight either. I mean the fact that everyone keeps asking what happened to her face and how her ass has been injected to water balloon proportions. She looks like a digitized character come to life rather than a real woman that is the least bit enviable.

If you look back at photos from Kim 5 years ago it’s clear that the ridiculous amount of plastic surgery and tweaking is finally beginning to have an adverse effect. Sure Kim may be headed to news stands and may have found herself now in the company of all the legitimate greats who have graced the cover of Vogue, but that doesn’t mean anything in the grand scheme of things. She is still spending more than she makes and has decided that a man with a horrendous temper is the perfect candidate to be future-ex-husband-number 3. It looks like a recipe for disaster don’t you think? Tell us your thoughts on Kimmie in the comments below!