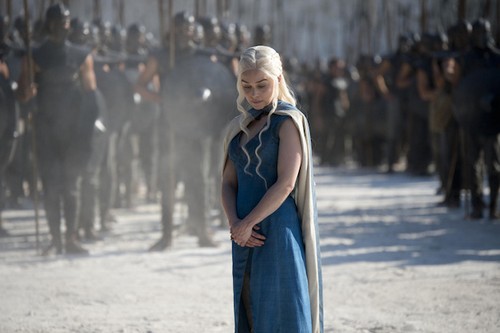 Tonight on HBO, Game of Thrones comes back with an all new episode, “Breaker of Chains.” Danaerys and her army have reached Meereen for an explosive encounter and, while on Dragonstone, Ser Davos is persisting in counseling Stannis against the use of the Red Woman’s magic.

On last week’s episode there was a reference to the sigils of House Lannister (Lion) and House Tyrell (Rose). In the books, Margaery Tyrell is sometimes referred to as “the Little Rose.” Tyrion lended Jaime (Nikolaj Coster-Waldau) a hand. Joffrey (Jack Gleeson) and Margaery (Natalie Dormer) hosted a breakfast. At Dragonstone, Stannis (Stephen Dillane) lost patience with Davos (Liam Cunningham). Ramsay (Iwan Rheon) found a purpose for his pet. North of the Wall, Bran (Isaac Hempstead Wright) saw where they must go.

Did you watch last week’s episode?  We did! We have a full and detailed recap right here for your enjoyment.

On tonight’s episode, in the frenzied aftermath of the royal wedding, Tyrion gets a visit from a loyal subject, but wonders if anyone in his family will help him out of his current predicament. Meanwhile, Tywin offers to work for the common good with a presumed enemy; Sam takes stock of the personnel at Castle Black; the Hound gives another life lesson to Arya; and Daenerys makes a decision outside the walls of Meereen.

In the opening scene, we see Joffrey in his dead — very dead — poisoned state. Cersei’s blaming Tyrion and immediately demands for the guards to locate Sansa, who’s fleeing with the gentleman who gave her the necklace in a past episode. They row out to sea and head towards a boat. It’s nighttime, foggy, and the gentleman helps her onto the ship. He tells her that she’ll be fine, that she’s stronger than she knows.

We find out that the man’s working for Little Finger. He waits for her on the boat. One of Little Finger’s men shoots the man who delivered her to the ship — so as to protect the secret of Sansa’s fleeing. Little Finger tells her that she’s safe and that they’re now fleeing home.

Margaery and her grandmother talk about Joffrey’s death, and she tells her that she’s probably better off for it. She tells her that her circumstances have improved dramatically — and not to worry about the alliance the Tyrell’s share with the Lannisters. They’re still every bit as important to them as they were prior to Joffrey’s death.

Twyin, Cersei, and Tommen mourn Joffrey’s death. They talk over his body as Tywin prepares Tommen for his new role as future king. Twyin informs Tommen that wisdom is what makes a great king; he tells him that a wise king knows what he knows and recognizes the things he doesn’t know. Tywin says that Joffrey was not a good king, not a wise king, and that he should’ve listened to his counsel. Perhaps if he had, he’d still be alive.

Cersei continues to think that Tyrion killed her son. Jaime enters the room where Joffrey’s being held and Cersei asks Jaime to avenge their son’s death. She wants him to kill Tyrion. Jaime’s opposed to this idea. How can he kill his brother, their brother?

Meanwhile, The Hound and Arya are on the road, perhaps journeying toward a place known as Fairmarket. The Hound can’t be sure because he doesn’t have a map. Some travelers notice The Hound and Arya on the side of the road. They offer them a place to stay and a nice, hot meal. Rabbit stew. The man tries to get The Hound and Arya to stay at their place until the New Moon to help with the harvest. The man says he’ll offer fair wages for fair work, and The Hound agrees. Later, The Hound steals the people’s silver and goes on his way. Arya’s distraught that he stole from these nice, sweet farmers, but she can’t persuade him to do the right thing. Together, the two continue on down the road.

On the wall, Sam worries for Gilly’s safety.

Meanwhile, Stannis tries to figure out how he’s going to win the throne. He admits that he won’t become another page in someone else’s history book. Ser Davos and him contemplate the future and fear they’re running out of time. And without any gold, well, they’ll need to think of a plan fast. The Red Woman’s magic and visions and prophecies might help, but Ser Davos says he’s never heard of such things winning wars.

Sam takes Gilly and her baby boy to a brothel — where he thinks she’ll be safe. Of course, he’s not saying she should be a prostitute; he strikes a deal with the woman in charge of the house that Gilly will cook, clean, and watch after the other women’s babies. Gilly doesn’t want Sam to leave her; however, he insists she’ll be safer here than with him.

Meanwhile, back in King’s Landing, Prince Oberyn and his lover have fun in Little Finger’s brothel. Twyin interrupts their session and asks to talk with Oberyn alone. Lord Twyin accuses Oberyn of plotting with Lord Tyrion to kill Joffrey — because Oberyn has extensive knowledge in the field of poisons.

Tyrion’s being held in a prison cell. Podrick brings him food and drink. Tyrion asks him what people are saying out there in the real world. Pod tells him that he’ll be facing trial. The judges at the trial will be the following people: Lord Tywin, Mace Tyrell, and Prince Oberyn. Podrick says that he was given a deal . . . . to testify against Tyrion and be granted a new title, one of higher standing. Tyrion says that he won’t have his best, most loyal squire getting wrapped up in this mess and urges him to get out of King’s Landing before it’s too late (because Podrick was a faithful subject and didn’t take the deal).

Meanwhile, the Wildlings (and Ygritte) attack a small camp. They’re heading toward the wall — toward Castle Black.

On the wall, everyone says that the wall must be defended and Castle Black must be protected at all cost.

Daenerys and her army march toward Meereen. She intends to free the slaves there as well.

The episode ends before the slave’s rise up against their masters.