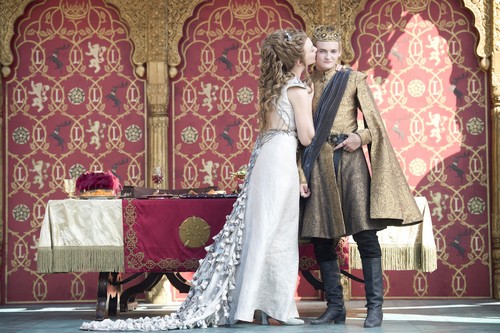 Tonight on HBO the highly anticipated season 4 of Game of Thrones premieres with a new episode called, “The Lion and the Rose.”  On it, A who’s who of honored guests turns out for Joffrey and Margaery’s wedding in King’s Landing, but the king’s taste in entertainment rubs many of them the wrong way.

On last week’s episode Tyrion (Peter Dinklage) welcomed a guest to King’s Landing. At Castle Black, Jon Snow (Kit Harington) found himself unwelcome. Dany (Emilia Clarke) was pointed to Meereen, the mother of all slave cities. Arya (Maisie Williams) ran into an old friend.  Did you watch last week’s episode?  We did and we recapped it right here for you.

On tonight’s episode the title is a reference to the sigils of House Lannister (Lion) and House Tyrell (Rose). In the books Margaery Tyrell is sometimes referred to as “the Little Rose”.  Tyrion lends Jaime (Nikolaj Coster-Waldau) a hand. Joffrey (Jack Gleeson) and Margaery (Natalie Dormer) host a breakfast. At Dragonstone, Stannis (Stephen Dillane) loses patience with Davos (Liam Cunningham). Ramsay (Iwan Rheon) finds a purpose for his pet. North of the Wall, Bran (Isaac Hempstead Wright) sees where they must go.

We will be live blogging the episode at 9PM EST . . . so make sure to come back to this spot and watch the show with us.   Make sure to refresh often so you get the most current info!  While you wait for the episode, you can catch a sneak peek of tonight’s episode BELOW!

Tonight’s episode opens in the forest and a girl is being chased by Reek, Ramsay, Miranda and dogs they tell her if she makes it out of the woods she wins. Miranda hits the girl and Ramsay tells her she cannot kill the girl because they have to leave her to the dogs.

We soon find out that Tyrion has gotten Bronn to help Jamie.  Bronn wants him to use a sparing sword and not his blade but Jamie is not interested.  They start to spar.

Ramsay asks Reek/Theon to give him a nice close shave as his father watches. Ramsay has Reek/Theon to tell Roose that Bran and Rickard Stark are still alive.  Ramsay tells Reek/Theon that Rob Stark is dead and asks him how he feels about it.

Roose offers a man 1000 acres to find Bran and Rickard. Roose tells Ramsay if he wants to prove he is a Bolton go get the Stark boys and take them out.

Vary tells Tyrion that Shae has been noticed and that Cersei knows and it is only a matter of time before his father Tyrell Lannister finds out.  He warns Tyrion that his father promised to hang the next Tyrion whore he finds out about.

At a dinner for  Margaery Tyrell and Joffrey Baratheon Cersei points out Shae Tyrion’s whore.  Tyrell asks that Shae be brought to his room.

Tyrion gives Joffrey a book for a wedding gift and he thanks him.  Joffrey’s father gives him a sword made out of Valerian steal.  Joffrey picks up the sword and starts cutting things on the table.  He asks what he should call the sword.  Joffrey then comments, “each time I use it, it will be like cutting Ned Stark’s head off again” as Stansa listened.

Tyrion is in his rooms and Shae comes in –  he tells her he cannot continue their friendship.  He needs to uphold his vows.  There is a ship in the harbour bound for Pentos.  He is mean to Shae and tells her he has enjoyed his time with her but it is over.  Shae sobs.  Tyrion lets her know Bronn will escort her to her ship.

Meanwhile over with Melisandre of Asshai and Stannis they are burning men (one Lord Florent, Stannis’ brother-in-law) at the stake.  Stannis’ wife is there and she says she saw their soul go in the fire.  Davos Seaworth is upset and tells Stannis but Stannis does not care.

Stannis, Melisandre and his wife Selyse Florent are having dinner and Selyse tells Stannis that there daughter is willful and she needs the rod.  Stannis tells her she better not touch her.  Selyse suggests Melisandre speaks to her.  Melisandre heads to see Shireen and talk to her.

Something attacks a deer and then we see Bran being waken.  Bran was in summer’s body and Jojen tells him not to do it often because he could forget everything if he stays in Summer (his wolf) too long.  Bran asks Hodor to take him to the tree.  He starts to see a vision.  Bran tells Meera and Jojen he knows where they have to go.

At the wedding of Margaery Tyrell and Joffrey Baratheon the wedding is proceeding.  Joffrey kisses Margaery to pledge his love.  Sansa tells Tyrion they have a new Queen.  Tyrion says, “Better her than you.”

Bronn tells Tyrion that he saw the ship sail and Shae is gone.  Bronn says to Tyrion, “Go drink till it feels like you did the right thing!”

Joffrey makes an annoucement that Queen Margaery has an announcement to make.  To thank the Gods for making the war come to an end, King Joffrey has decided the leftovers from the wedding will go to the poorest in the city.

Jamie comes to see Loras Tyrell and tells him if he ever marries his sister she will kill him in his sleep.

Cersei arranges for the leftovers of the wedding to be fed to the dogs.  She is going against Margaery’s orders.

Prince Oberyn comes to see Cersei and Tywin and Prince Oberyn is sarcastic with Cersei and calls her a former regent and says, “you must be happy to have the crown off your head, a weight off your neck.”

Joffrey makes an announcement and tells everyone to clear the floor – he feels there has been to much amusement today.  He feels it is time to contemplate history.

Out comes 5 dwarfs dressed as the five Kings and a play.   They are making fun of everyone’s claim to the thrones.  Tyrion is upset, Sansa  is upset because one of the dwarfs is dressed as her brother with a wolf head and screaming, “I’m the King of the North.” Joffrey laughs in glee.

Joffrey asks if there are others that want to challenge his reign.  Joffrey asks if Tyrion wants to fight.  Tyrion politely declines but makes a few comments that does not please Joffrey and he comes over and spills his wine on Tyrion’s head.

Margaery calls Joffrey back because her father will be making a toast.  Joffrey says he cannot toast without wine and demands that Tyrion be his cup bearer.  Tyrion says, “You do me a great honor.”  Joffrey replies, “It was not meant as a honor.”  He drops his cup on the floor and makes Tyrion pick it up and then demands he fill it while all the guests watch.  He then demands Tyrion kneel before his King.

Margaery then screams, “look the pie.”  Joffrey takes his sword and goes over and cuts the pie open.  Margaery feed Joffrey pie.  Tyrion and Sansa gets up and to leave.  Joffrey tells him he cannot leave he has to brings him wine.  and then goes to leave.  Joffrey starts to choke and falls to the floor.  Blood is coming from his nose and spit from his mouth.  He is choking.

Tyrion picks up Joffrey’s cup and Cersei looks up.  Someone comes up to Sansa and tells her if she wants to leave it has to be now.

Cersei looks at Tyrion and yells, “You did this, you killed my son.  Take him, Take him!”