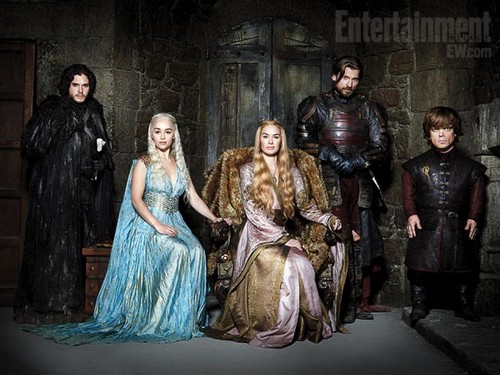 Tonight on HBO the highly anticipated season 4 of Game of Thrones premieres with a new episode called “Two Swords.”  In the Season 4 premiere, Tyrion welcomes a surprise guest to King’s Landing for the royal wedding, but fears he’s come to the Red Keep for something else. Meanwhile, Jon warns his skeptical Night’s Watch superiors about an impending attack; Jaime struggles to regain his status at home; Arya encounters a face from her past; and Daario Naharis discusses strategy with Daenerys on the journey to the slave city Meereen.

Luckily enough the show is on its 4th season and is used to taking creative license every now and then. Nothing too noticeable yet but we should start mentally preparing now. In other words, we the readers are going to start being as shocked as everyone else. To adjust to our new circumstances, we better start paying attention to the teasers and trailers now. Nothing is a guarantee. Like Arya once said: Anyone can be killed!

We will be live blogging the episode at 9PM EST . . . so make sure to come back to this spot and watch the show with us.   Make sure to refresh often so you get the most current info!  While you wait for the episode, you can catch a sneak peek of tonight’s episode BELOW!

The show opens with the image of a sword — a giant sword. Twyin grabs it and presents it to the blacksmith, who proceeds to put it in the fire. The metal’s melted down and used to make two new swords.

[Next, we have the opening credits, which, as always, last 420 minutes.]

Jaime Lannister is presented the sword by Twyin. We learn that the reworked swords were made of Valyrian steel. Twyin urges Jaime to return to Casterly rock while he remains beside the king, but Jaime is not liking this idea and wants to remain in King’s Landing.

Meanwhile, Tyrion waits to meet Prince Doran, but the arriving parties reveal that Prince Doran’s poor health prevented him from attending. In his place is his brother, Prince Oberyn. They are arriving for the royal wedding.

Prince Oberyn is in Little Finger’s establishment and about to have fun with a few prostitutes when he hears someone singing a song. He goes to check it out and hears two Lannister singing a song; they make fun of his homeland and where he comes from. So her stabs the heckler in the hand. Tyrion comes in and would like to have a word in private.

Tyrion tells Prince Oberyn that the king is so thankful that he could attend the royal wedding — but Prince Oberyn knows this isn’t the case. Tyrion wants to know the real reason why he’s come to King’s Landing. Prince Oberyn reveals that he has a deep hatred for the Lannisters because two of his family members were killed by the hands of Lannisters.

Meanwhile, Daenerys strokes one of her growing dragons and watches two of them fly through the sky. She sits on a cliff beside the sea. One of them brings back food and they begin to fight over the pickings; one of the dragons snaps at Daenerys, and she’s visibly taken aback.

Next, Daenerys surveys the army she acquired last season.

Tyrion visits Sansa, his wife, who’s currently refusing to eat. Tyrion offers to “help her” in whatever ways he can. She says that she stays awake all night, unable to sleep, tormented by the thoughts of Rob and her mother’s gruesome deaths. Tyrion tries to offer her comfort, but Sansa admits she doesn’t want any help and instead flees to the church. She says that she doesn’t pray anymore; it’s the only place she can go where people don’t talk to her.

Tyrion meets with Shae, who just wants to be close to the man she loves. Shae wonders why he wanted to ship her away from King’s Landing and bribe her with diamonds, but Tyrion insists he has no idea what she’s talking about.

Jaime continues to get used to his new, fake gold hand. Cersei and her brother have a chat. Jaime observes that she’s “drinking more” and admits that “father disowned” him. Jaime wants to have a moment with Cersei, but she denies his advances, as she’s extremely mad that he left her; she doesn’t care if he left under circumstances he couldn’t control (i.e. being taken prisoner). He was simply gone for too long and, now, everything’s changed. A young lady (who overheard Tyrion and Shae’s conversation) comes to Cersei. She tells her that she has something important to tell her.

Ygritte and her gang are camping in the cliffs when they’re visited by a band of Thenns. Their leader has strange, scar-like markings on his face.

Jon Snow is being questioned for “running his sword through a man of the Night’s Watch.” The council admits that, now, “he talks like a Wildling.” He admits to breaking his vows, including “laying with a Wildling girl.” Jon Snow says they can execute him if they want, but he tells everyone the truth.

Maegery Tyrell sits with her grandmother, whose helping her pick out jewels for her wedding day, though none seem worthy enough for the occasion.

Joffrey and Jaime are talking. Joffrey claims that “he won the war,” but Jaime quickly corrects him, saying, “The war is not yet won.”

Sansa is walking through the gardens and gets spooked, thinking that someone is following her. A man comes to find her. He admits that he was once a knight and is now a fool. This is the knight whose life Sansa saved at Joffrey’s Name Day Ceremony. He says that he owes her his life — but even that’s not worth enough. So he presents her with a beautiful necklace that belonged to his mother. At first, Sansa doesn’t accept it, but after he insists, she takes it and says she’ll wear it with pride.

Arya and The Hound travel on horseback through the forest. They come across a farm. One of the men on the farm has Arya’s sword, Needle. She storms down there because she wants it back. The Hound, sworn to protect her grace, has no choice but to follow her.

They enter a bar of sorts. The man with Needle recognizes The Hound and comes over to sit with them. The man asks him to come along with his band of men, but The Hound says he’s not going to King’s Landing. “Fuck the King,” he says. The man stares at him in disbelief. Arya has a smirk on her face.

A fight breaks out. After The Hound takes care of most of the dirty men, Arya reclaims her beloved Needle kills the guy who stole it (and killed her friend).

The Hound and Arya ride away on two separate horses. Together. Arya says that she won’t run away — because where does she have to get to. She has no family. No one. Not anymore.