BY Nicholas Sanford on May 18, 2014 | Comments: 2 comments
Related : Game of Thrones, Recap, Television 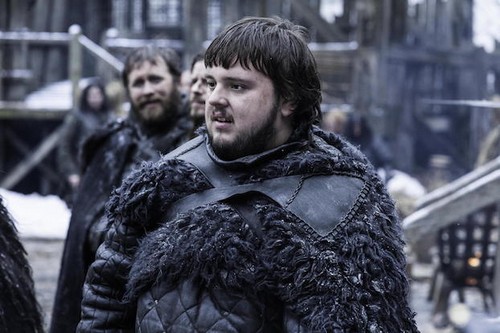 Tonight on HBO, Game of Thrones is back with an all new episode called “Mockingbird.” On this evening’s episode, Brienne follows a new lead on the road with Podrick; Tyrion finds a surprising ally; Jon’s warnings about the Wall’s weaknesses are ignored; and Daenerys mulls giving Daario a longer leash.

On last week’s episode, Stannis (Stephen Dillane) and Davos (Liam Cunningham) set sail with a new strategy. Dany met with supplicants. Tyrion (Peter Dinklage) faced down his father in the throne room. More happened, did you watch the episode? We did and we recapped it for you HERE!

On tonight’s episode, Tyrion enlists an unlikely ally. Daario (Michiel Huisman) entreats Dany to allow him to do what he does best. Jon’s warnings about the Wall’s vulnerability fall on deaf ears. Brienne (Gwendoline Christie) follows a new lead on the road with Pod (Daniel Portman).

The show opens with Jaime and Tyrion arguing about Tyrion’s recent decision to have a Trial by Duel. He says that he couldn’t stand to watch Shae spew her lies, so he had to put a stop to it — and that’s the only way he knew how. Bronn will be Tyrion’s champion in the duel — and he’s wanting to know who Cersei’s chosen for her champion.

Next, we learn that Cersei’s champion will be Ser Gregor. He’s a really big dude — and has a REALLY big sword.

Meanwhile, Arya and The Hound are continuing their journey. They come across a village that’s been destroyed and meet a fallen man; he’s mortally wounded. Arya asks him why he doesn’t just end his life and go on. “Nothing could be worse than this,” she says. He responds, “Maybe nothing is worse than this.” Arya responds, “Nothing isn’t better or worse than anything; nothing’s just nothing.

The Hound runs him through with his sword. Next, a bounty hunter comes and attacks The Hound, informing him that there’s been a bounty placed on his head. He also tells him that the king has been murdered. Arya realizes that this hunter was one of her captors — so she kills him with Needle.

The Night’s Watch has a meeting, and they discuss how they’re going to protect the wall.

Daario Naharis brings flowers to Daenerys and they proceed to have sex.

Melisandre talks with Stannis’s wife and says that when they set sail that her daughter MUST be with them, as the Lord of Light needs her in the future.

Daenarys continues her quest to free the slaves. She tells Jorah that she’s ordered the Second Sons to kill the Masters in Yunkai. Jorah is strongly opposed to this and sort of fills D with a change of heart.

Brienne and Pod continue their journey as well, and they stop to eat at a tavern. They run into Arya’s friend, the one she saved, and he tells Brienne what happened to Arya — and that she’s probably still alive.

Prince Oberyn comes to visit Tyrion and tells him about the chat he had with Cersei. He eventually says that he came to King’s Landing for justice — to avenge his sister’s brutal murder, done by the hand of the Lannisters. Tyrion says that he’s come to the wrong place for justice, but Oberyn says he’s come to the perfect place. He says that he won’t stop until all those attached to his sister’s murder have been killed — starting with Ser Gregor, the man Tyrion’s set to fight. Oberyn says that he will be Tyrion’s champion. Tyrion’s joy is noticeable.

Peter Baelish kisses Sansa, and Aunt Lysa sees. Later, she threatens Sansa by holding her head over the Moon Door. Basically, she’s crazy. Peter comes in to stop Lysa. Peter goes close to Lysa and says, “I have only loved one woman my entire life.” She thinks he’s going to say her, but he says, “Your sister.”

And then he pushes Lysa through the Moon Door. See ya, girl.