BY Heather DiPietro on May 11, 2014 | Comments: 3 comments
Related : Game of Thrones, Recap, Television 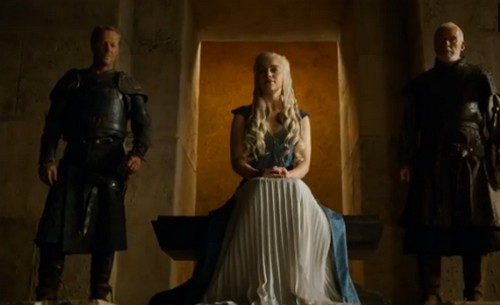 Tonight on HBO, Game of Thrones is back with an all new episode called “The Laws of God and Men.” On this evening’s episode, Tyrion faces his father in the throne room; Stannis and Davos put their faith in a new strategy; Daenerys’ sphere of influence expands.

On tlast week’s episode Joffrey’s brother Tommen was crowned King. Tywin and Cersei decided on a plan to marry Tommen to Joffrey’s widow Margaery Tyrell after a respectable mourning period.  The Lannisters know they need the Tyrells because the House of Lannister is in debt to the Bank of Braavos.  Daenerys learned that King Joffrey had died.  She chose to postpone her journey towards Westeros to go back to make sure all the slaves she freed were still free.  Pod and Brienne rode onward to look for Sansa.  The Night’s Watch successfully overtook Craster’s Keep.  More happened, did you watch the episode?  We did and we recapped it for you HERE!

Tonight’s episode opens with Stannis and Davos sailing to Braavos.  Then they are at Braavos, Stannis is impatient he has been there since mid-day but he wants to ask for a loan.  Davos tells him that the Easterners have a different sense of time.

Stannis and Davos are visiting the Iron Bank for a loan.  The rep for the Iron Bank, Tycho Nestoris wants to know what Lord Stannis wants.  After Davos spurts out Stannis credentials Tycho tells them that the Iron Throne is currently seated by Tommen.

Davos Tycho and the  members of the Iron Bank that Stannis is their best chance to get the money back that is owed to him by the Lannisters.  He reminds them that Tywin is 67-years-old and won’t be around for long.  If Tywin dies they are stuck with Cersei and Tommen and they have no hope of getting their money back.

Later Stannis walks into a bath house and see his pirate friend, Salladhor Saan who remarks he thought, “Davos was rotting in a cell.” Salladhor asks Davos to join him but Davos tells him they have no time because they sail on the morn.  Davos throws him money and tells him, “you won’t be alone and you won’t be poor.”

Yara Greyjoy tells her men she is sailing to save Thron.  She then tells her men that Ramsay Snow flayed their prince and her brother and they are going to get Theon back.  Yara arrives with her Ironmen and grabs one of Ramsay’s men and asks to be taken to Theon.

Yara gets into the dungeons sees Theon and he is in bad shape.  Yara tells him, “she is taking him home.”  Theon/Reek goes insane, he is sure she is tricking him and does not want to go with her.  He causes such a ruckus that Ramsay Snow hears them and comes into the dungeon with his men.  He remarks, “it is turning into a lovely evening,” and they start fighting.

Yara and her men defeat Ramsay’s men and she tells Ramsay to give her Theon and no one else will live.  Ramsay threatens to open the pens with ferocious dogs in them.  Theon/Reek has run back into his cell.  Yara leaves and tells her men to sail away when they ask about her brother she tells them, “her brother is dead.”

Daenerys’ Dragons are getting large and one of them set fire to a field and took his goats.  The man comes to see Daenerys and tells him that he is a goat farmer and because the dragons took his goats he has nothing.  She agrees to pay him 3x the worth of the goats.  The man leaves happy.

Hizdahr xo Laraq asks for an audience to see Daenerys.  He is from one of the oldest families of Meereen.  He tells Daenerys that she crucified his father.  He asks for the right to take his father down and give him a proper burial.  She agrees.

Daenerys asks how many more people are waiting for and audience with her, she is told 212.

Jamie comes to see Tyrion and he says, “let me guess I have been pardoned.”  The guards with Jamie unchain Tyrion and Jamie tells him it was, “Father’s orders.”

Tyrion is brought in to the Throne Room for his trial and King Tommen tells the court that he recuses himself from Tyrion’s trial and lets his grandfather Tywin preside over the trial.

Tyrion starts to call the witness that give testimony.  Maester Pycelle tells the court that poisons from his stores were plundered and he shows the court a necklace that Sansa wore that held the poison.  Cersei comes next and gives her testimony, at least her version of testimony.

Varys gives his testimony and when he finishes Tyrion asks if he can ask Varys one quetion.  Tywin agrees, he can ask just one question.  Tyrion says, “You once said without ME the city would have certainly been defeated by Stannis.  You said the history books would not show it, but you would not forget?”  Do you forget that Lord Varys?  Varys replied, “Sadly I never forget anything.”

Tywin calls a break for one hour.  Jamie comes to see Tywin and is not pleased that Tywin is railroading Tyrion.  Jamie makes a bargain with his father, Tywin.  If Tywin spares Tyrion then he will quit the Kingsguard and take his rightful place as his son.  Jamie agrees to have children and support the Lannister name.  Tywin agrees to spare Tyrion’s life and send him to the Black Watch.

Jamie tells Tywin the plan and tells him to keep quiet.

The next witness comes in and it is Shae.  Shae tells the court that Tyrion is guilty and that he planned the death of Joffrey with his wife Sansa.  Sansa wanted revenge.  Prince Oberyn asks how Shae knows all this and she lets the court know she was Tyrion’s whore.  She then claims that Tyrion kidnapped her and forced her to do things to him.

Tyrion is devastated, he says, “Shae, please don’t.”  Shae replies, “I am a whore remember.”  She then tells the court that Tyrion wanted to sleep with Sansa and Sansa wouldn’t let him so he agreed to kill Joffrey for her.

Then Tyrion says, “I wish to confess.  I am guilty of a far more monstrous crime, I am guilty of being a dwarf.  I have been on trial for this my entire life.”

Tyrion then says, “I did not kill your precious Joffrey but it gave me the most pleasure any whore has given me.  I wish I was the monster you thought it was.  I will not get any justice here so I will let the Gods decided my fate.  I demand a trial by combat.”