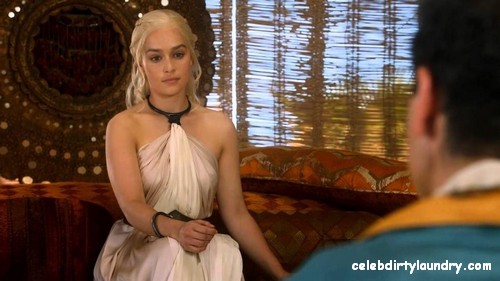 On tonight’s show a who’s who of honored guests turns out for Joffrey and Margaery’s wedding in King’s Landing, but the king’s taste in entertainment rubs many of them the wrong way. He decides to have dwarfs dress as the five kings trying to defeat him for his kingdom.  One of the dwarfs was dressed as Rob Stark and it hurt Sansa.  Joffrey was vile to Tyrion at his wedding.  Meanwhile, Bronn gives a lesson to an unlikely pupil, Jamie at Tyrion’s request. Bran’s vision helps map out his journey.  Stannis loses patience with Davos because he was upset Stannis burned his brother-in-law at the stake.  The Royal wedding took place and something shocking happened. More happened, did you watch tonight’s show?  We did and we recapped it for you HERE!

Spoiler alert: If you’re one of those people who doesn’t like spoilers, stop reading now! We have some juicy spoilers for you about the season 4 episode 3 HBO’s “Game Of Thrones.”

HBO’s Official Synopsis: “In the frenzied aftermath of the royal wedding, Tyrion gets a visit from a loyal subject, but wonders if anyone in his family will help him out of his current predicament. Meanwhile, Tywin offers to work for the common good with a presumed enemy; Sam takes stock of the personnel at Castle Black; the Hound gives another life lesson to Arya; and Daenerys makes a decision outside the walls of Meereen.”

On next week’s show the title of the episode is about Daenerys Targaryen.  She is referred as the “Breaker of Chains” or “Breaker of Shackles”.   Although we did not get to see her in episode 2 we will see her in episode 3. Cersei has Tyrion arrested for the murder of Joffrey but Tyrion realizes that he has been set up.  Although Margaery is now a window Lady Olenna Tyrell feels her situation has improved.  Margaery does not agree!  The episode was written by executive producers David Benioff and D.B. Weiss and directed by Alex Graves.

The Game Of Thrones Season 4, Episode 3 “Breaker of Chains” airs on HBO on April 20th, 2014. Check out the preview videos from episode 2 below and let us know in the comments below what you think!