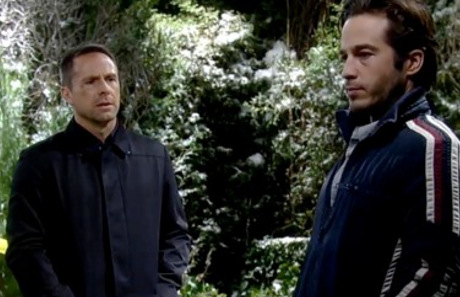 The drama continues on General Hospital — but does it honestly ever stop? Of course not. Why else would we keep returning to one of our favorite soaps, which has enough scandal both on and off screen to keep our site filled for days on end? On the recent episode of GH, Julian Jerome‘s son, Lucas, came out as gay and, unfortunately, Julian didn’t take well to his son’s revelation. Julian was given two choices: accept his son for the person he is or get out of the picture altogether. Judging from Julian’s responses, it might be safe to say that the future of their relationship is up in the air.

Julian recently found out he had a son and when he went to ask his son about girls, well, the conversation went in a direction he wasn’t expecting. The cringeworthy conversation went down something like this . . . .  “I’m a little surprised by this!” Julian said. Lucas said, “What, you thought every son of yours would be straight?” Julian countered, “Ya I did! Have you considered the fact that you are going through a phase?”

Are you a soap fan? If so, what do you make of Julian’s rejection of his son? Let us know your thoughts in the comments section below. Also, if you’re a diehard soap fan like us, be sure to stay in the soapy conversation loop by interacting with the Soap Opera Spy on Facebook!