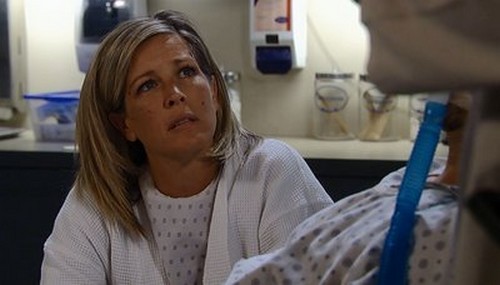 General Hospital is never a boring show, but the drama on the popular soap-opera heated up on Valentine’s Day, and it looks like it is just the beginning. The week of February 17th’s sneak peak spoilers promise some serious fallout from the Valentine’s Day drama in Port Charles.

Nicolas has a huge surprise for Britt, and it looks like he is actually going to ask her to marry him. The proposal is definitely going down next week on General Hospital. The interesting thing is will Britt bother to tell Nicolas about the paternity of her son? Once she sees that diamond engagement ring, she may chicken out and not tell him because she is scared he will retract the proposal. Or, maybe Nicolas’ love for Britt is much stronger than any of us suspected, and she confesses the truth about her son to him, and he proposes anyways. Would Nicolas really do that to Dante and Lulu though? General Hospital also teased that next week “Lulu and Dante are thrown for a loop,” so it is safe to assume that Elizabeth made good on her promise and told Lulu and Dante the truth about Britt’s baby. If Britt did chicken out and not tell Nicolas the truth, then he will definitely find out from Lulu and Dante before the week is over.

Next week on GH the feud between the Corinthos and Jeromes will be heating up, the files Ava handed over to Sonny appear to be exactly what he needed to take down her brother Jerome. Ava always has something up her sleeve though, it’s still hard to believe that she actually chose Morgan over her own brother.

Also next week on General Hospital, Franco will continue to fight for his life after his run in with crazy Heather, and Victor continues to manipulate Robin.

Don’t forget to check back here at CDL throughout the week, we will be dishing on all of the General Hospital excitement.